This post is just a companion post to a number of other posts that I’ve written around the desktop app converter, especially;

I’d made a demo of making a simple, blank WPF app and then using it to;

All of that was in the original post referenced above but the video below is a little more up to date. It’s also a little ‘rough and ready’ so excuse the production values

It also lines up with this post where I have a short screen capture of automatically making a .appx package from a .MSI via the Desktop App Converter going end-to-end from the installation of the converter through to installing/uninstalling the app;

A Quick Skip Through the Desktop App Converter

I thought I’d publish this after seeing the great post that @qmatteoq flagged on Twitter today which covers very similar ground with more detail so definitely check out that post as well if you’re interested in this area.

This post follows on from a few earlier posts around desktop app conversion and desktop apps packaged in .appx format for the Windows Store (or other means of deployment).

The long list of posts is here but I’d pull out 3-4 as below.

As an aside, since that earlier post ‘Open Live Writer’ is now in the Windows Store packaged as a UWP app which is very cool to see

Across those posts I’ve written pieces around;

and these ideas fall nicely into the categories of ‘Convert’ and ‘Enhance’ as explained in this great post on the Windows blog;

which is well worth a detailed read as it covers a lot of areas in a short article.

One thing that I haven’t written about is the idea that a ‘desktop app’ and a ‘UWP app’ can both sit in the same application package to be deployed to a user’s machine.

This is what the Windows blog article refers to as the ‘Extend’ phase and the blog points to this this sample on github;

The essential idea here is that you might hit a situation where you can build out most of your functionality into a UWP app but maybe there’s some code that’s not easy to migrate or maybe the UWP doesn’t have the APIs that you need and that code has to stay packaged in a desktop app.

The sample shows how such a desktop app and a UWP app can be packaged into a single .appx and deployed together and it also shows how they can then communicate with each other (via App Services) such that one can lean on the other to gain functionality.

I like samples but I also like to pull things apart for myself and so I did a quick walk-through of what’s needed to get started with this and I’m sharing that below. It’s not adding anything to the sample other than a step-by-step build up of something similar.

Note that in the walk through here I’m not concentrating on the possible dependencies of my desktop app, I’m purely thinking about how to get started…

I did a quick File->New project and made a blank WPF application that displays ‘Hello World’. I gave it a UI which is a TextBlock;

and some code behind;

Into the same solution, I added a new UWP application. I set it to use the 14393 SDK as both minimum/maximum versions and  I gave it a UI which is just a button;

and some code behind which doesn’t do anything;

I now have 2 projects in the solution as per the screenshot below; 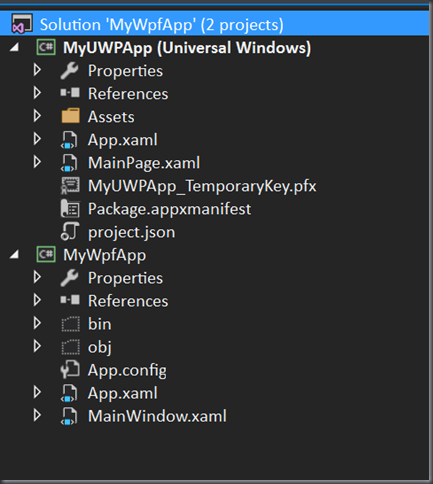 I need to make sure that when the UWP app’s .appx package is built, it includes the binaries for the WPF app.

I made sure that the WPF app would build first using the ‘Project Dependencies’ dialog; 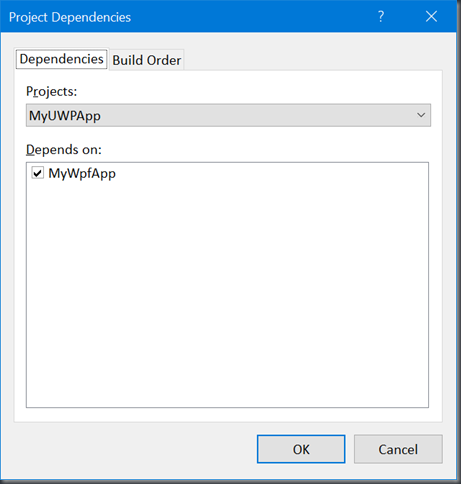 and then tried to make sure that the outputs from the build would be copied using this post-build action on the UWP project;

Note that I’m not at all sure that this would work when it comes to creating a package for Store via Visual Studio – it might need more manual work to get that working but I think this will work for me while deploying and debugging from Visual Studio itself.

Note also that, initially, I copied everything from the output folder of the WPF app to the Appx folder of the UWP. That proved to be a bad idea as the copy ended up overwriting things like Windows.md because the WPF app’s output folder has one of those in it and I then found that I wandered into weird exceptions that were a bit tricky to diagnose. Hence, I ended up just copying the .EXE from the WPF app for now.

The FullTrustProcessLauncher API is part of the Windows 10 Desktop extension SDK and so there’s a need to reference that extension before using the API; 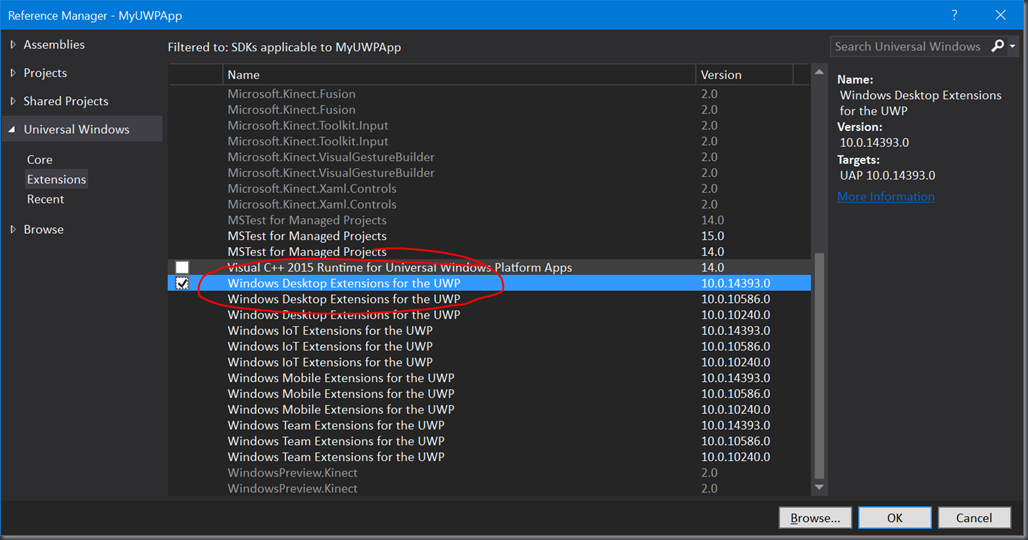 Step 5 – Make the API Call to Launch the Desktop App

I can now change the code-behind in the UWP app so as to launch the desktop app when the button is pressed;

but the app’s going to need to know which executable it is and so there’s a need to change the manifest to tell it.

I opened up the manifest for the UWP app in the XML editor and made a number of changes to it.

Firstly, I changed the target such that I was only targeting the desktop device family as my desktop app isn’t going to work on mobile etc. I also changed the Min/MaxVersion values here;

Secondly, I added the capability for full trust to the Capabilities section (the internetClient capability was already present);

I can now run my UWP app from Visual Studio and when I click on the button I get the WPF app launched as well; 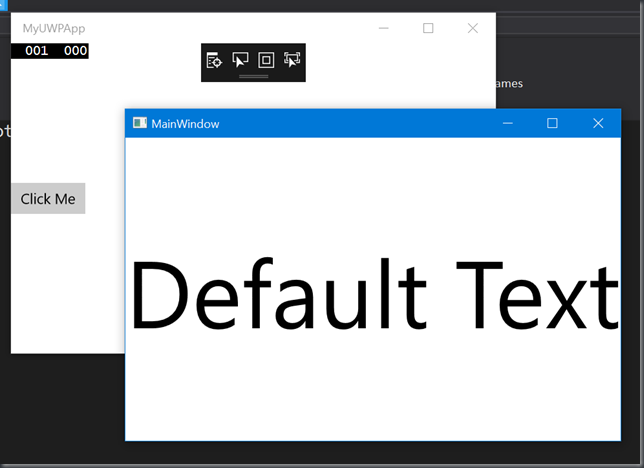 Step 8 – Getting the Apps to Talk

The prescribed way for these apps to talk to each other is via use of app services and in my case I’ve chosen for the WPF app to provide a basic service to the UWP app but this service could be arbitrarily complex, limited only by the types that can be passed across a boundary in a ValueSet which is the data type that flows back/forth across an app service.

As per my post of yesterday, I added the NuGet package uwpdesktop to my WPF application and then added in a little code in order for it to pick up messages from an app service and change its display. I’ve pasted the entire code behind here so that nothing gets lost (e.g. namespaces etc);

and so the WPF application is going to wait for requests on an app service called ChangeText and it’s using the PackageFamilyName that it will share with the UWP app because they both live in the same package.

Note that the app doesn’t do any error checking around the app service connection which is clearly something that we’d want to do.

On the UWP side, I need to make another manifest change to state that the app offers an app service and so my Extensions section there ends up looking like;

I chose to implement my basic app service by using the ‘Single Process Execution Model’ introduced in Windows 10 1607 which I mentioned here and so I overrode the OnBackgroundActivated method of my App class;

and I wrote a little static class just to do (hopefully) the bare minimum of dealing with an AppServiceConnection as below. It gets a little more complicated than it might otherwise do because there’s a need for a queue to hold messages that might be sent prior to the connection request arriving from the WPF app;

and, finally, rewrote my code-behind for the UWP so as to have the click-handler for the button use this class to send a message over to the WPF app;

which is deliberately simple.

Spinning that up in Visual Studio I get the two apps side-by-side and that all seems to work out pretty well in that the comms flow from UWP->WPF;

By virtue of a fairly simple process, at the end of the post we’ve ended up with two apps in a single package. One a regular UWP app. The other, a desktop app and then we have the ability for the UWP app to make use of code present in the desktop app by making use of an App Service to communicate between the two.

I won’t post the code for what I’ve done here because I think it’s better to refer to the sample;

as my main aim here was to work through something very similar to what that sample is doing from scratch so as to try and understand the pieces involved.

I needed this video of running an example app through the Desktop App Converter from start to finish and so I’m sharing it here too;

For full details, go to MSDN.

Feel free to borrow that video if you have a use for it at your own events etc. but, of course, keep in mind that I’ve defaulted a tonne of switches there.