I recently installed the Redstone 4 Preview onto a HoloLens as documented here;

and one of the many things that interested me around what was present in the preview was the piece about ‘research mode’ which (from the docs);

which then detail the sensors as;

So, it sounds like there’s a possibility of 8 streams of data there and developers have been asking about access to these streams for some time as in this forum question;

Will we have access to the the depth sensors, IR cameras, and RGB cameras data streams?

and prior to the RS4 preview the answer was “not possible” but it looks like the preview has some experimental support for getting access to these streams.

That said, in order to switch this on a developer has to (from the docs);

“First, ensure “Use developer features” and “Enable Device Portal” are set to On in Settings > Update & Security > For developers on HoloLens. Next, on a desktop PC, use Device Portal to access your HoloLens through a web browser, expand System, select Research mode, and check the box next to “Allow access to sensor streams.” Reboot your HoloLens for the settings to take effect.

and if you visit that device portal and switch this setting to allow “Research Mode” then you’ll notice that it says;

So the guidance here is pretty strong and says that this setting will damage performance, is not recommended apart from for active research and will mean that an application using it will not be applicable for the Windows Store.

With all of those caveats in mind, I wanted to try this out and see if I could get some data from the device and so I started to write some code.

Before getting there, I want to re-state that the code here is just my own work, likely to be quite rough and experimental and there are official samples coming in this area later in the month so keep your eye on the URL that the device portal points you to;

for official updates. Meanwhile, on with my rough work which I’ve actually attempted before…

where I was trying to use UWP media capture pieces (e.g. MediaCapture, MediaFrameReader, MediaFrameSourceGroup etc) in order to get access to sensor streams but I only came away with a media source group called MN34150 which I think represents the built-in webcam on the device and it didn’t surface any depth streams or infrared streams nor streams from the other 4 environment sensing cameras on the device.

I wanted to start fairly small and so I wondered whether I might write an app for HoloLens which would access 1 or 2 of these new streams and send the data from them on some frequency over the network to some other (desktop) app which would display them.

I thought I’d begin with a 2D app as I find the development time quicker there than working in 3D and so I spun up a new XAML based 2D UWP app on SDK version 17125 (I think 17133 may also be out by the time of writing so keep that in mind).

To speed things up a little further, I borrowed some socket code from this previous post;

That post contained some code where I used Bluetooth LE advertising in order to connect sockets across 2 devices without any need to manually enter (or assume) IP addresses or ports – one device creates a socket and advertises its details over Bluetooth LE and the other device finds the advertisement and (assuming some common network) connects a socket to the address/port combination advertised. In that post, the main class that I wrote was named AutoConnectMessagePipe and I gave it some capability around sending raw byte arrays, strings and serialized objects but for my purposes in this experiment, I have stripped the code back to just send byte arrays back and forth.

In my new app for this post, that code ends up being run at start up time and ends up looking something like this;

Once the call to WaitForConnectionAsync completes, we should have a connected client ready to talk down the socket to our app on HoloLens and receive some media frames from the device.

To use these pieces means that my HoloLens project would need capabilities specified in its application manifest for bluetooth and probably internet (client/server) and private networks. I also figured that it might well need the webcam capability and the spatial perception capability too. 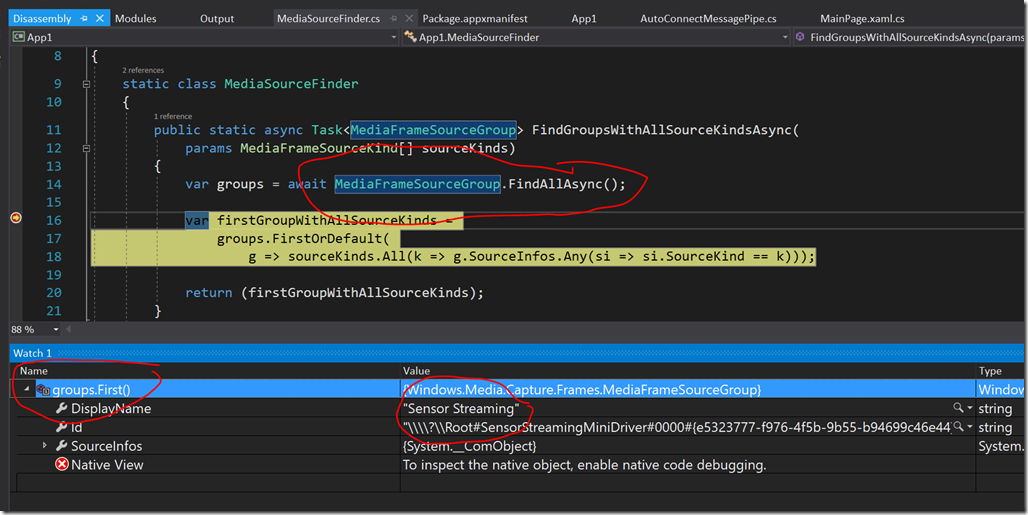 and that seemed fine but when I came to code which tried to create a MediaCapture using this source, I hit a bit of a snag – the device was raising a dialog asking for access to the camera but then it was crashing; 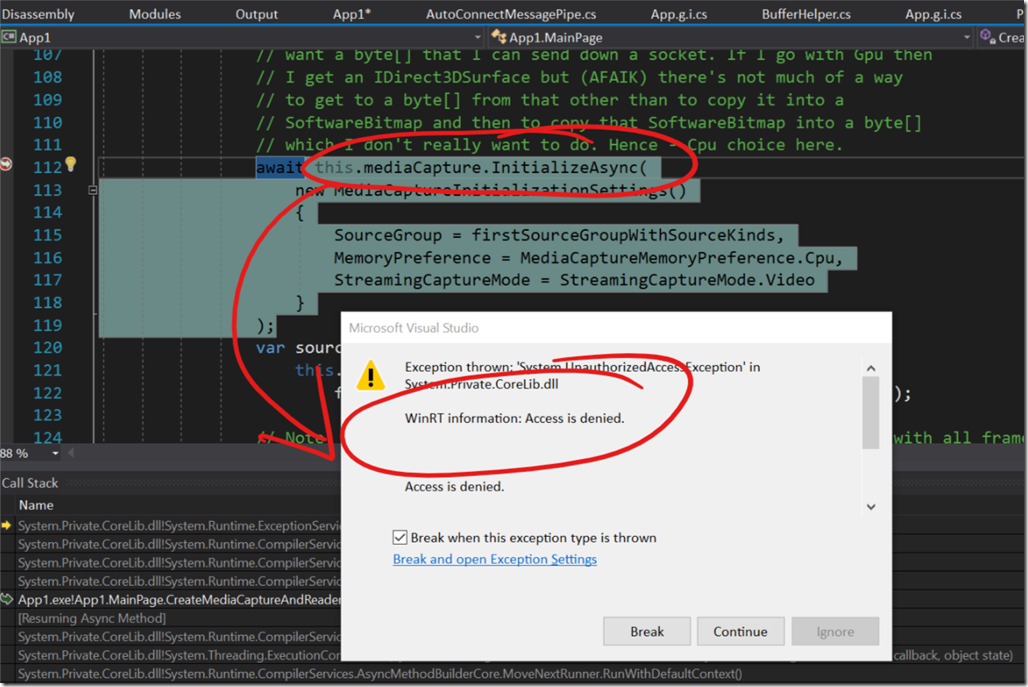 and I figured that it must be that having the spatial perception capability in my app manifest mustn’t be enough to switch on access to these streams and so, perhaps, there was some new capability that allowed access?

I checked out the list of capabilities in the docs;

and couldn’t find anything there – that doc is really good and partitions capabilities into different groups but it maybe hasn’t been updated yet for the preview and, as far as I know, that set of capabilities maps fairly literally onto the registry key;

and so I had a look at the capabilityClass_Restricted key on my RS4 preview machine and compared the contents of the key named MemberCapability to the one on my Fall Creators Update machine and the list looks to contain some new restricted capabilities;

and so I figured that the one that I would need was likely to be perceptionSensorsExperimental and so I added that to my app manifest within the restricted section (as per that earlier doc on how to add restricted capabilities) as below;

That manifest is probably overkill for what I need here but adding that extra capability allowed my MediaCapture to initialise ok;

and so I can make progress but I wasn’t quite “ready” to write code which would handle all of the available streams and so I decided that I would try and access a single depth stream and a single infrared stream as a starting point and so my code has an array of the stream types that it wants to access;

and I wrote this little class;

which provides some limited helpers which let me take that array of MediaFrameSourceKind[] (depth/infrared) and attempt to;

Those bits of code are enough to enable me to instantiate a MediaCapture for the source group;

and once I have a MediaCapture I can then use it to open MediaFrameReader instances for the sources that I am interested in and I get frame readers for each of the streams.

I initially tried to do this by using MediaCapture.CreateMultiSourceFrameReader in order to have a single reader which gathered all the frames but this seemed to throw exceptions on me and so I switched to using the regular CreateFrameReaderAsync() on each of the sources separately which seemed to work fine for me although it doesn’t have the ability to ‘synchronise’ the frames which the multi frame reader might have.

Once I had readers open on a couple of streams, I quickly realised that they were going to fire back “quite a lot of data” and that simply to handling the FrameArrived event and passing the frame data over the network would eat my WiFi bandwidth.

Specifically, it seemed that I had selected depth streams firing at 30fps with either 8 or 16 bits per pixel at a resolution of 448*450 pixels. That meant that even with just 2 streams I would be trying to copy maybe ~20MB a second over the network which didn’t seem like a great idea.

Based on that, I decided that rather than try to handle every FrameArrived event, I would instead just install a timer which ticked on some interval, attempted to get the latest frame from each of the readers and sent it over the network.

This seemed to work out “ok” although the code I have was put together pretty quickly and so is rough and not very resilient to failure and it lives in this App in the solution; 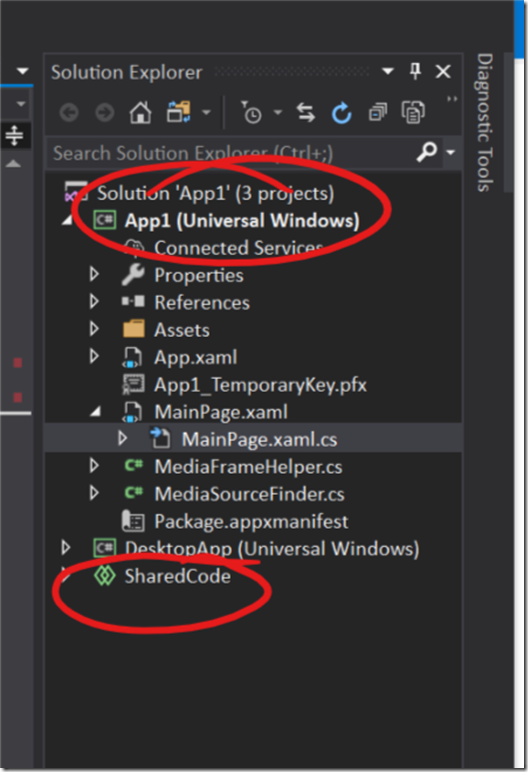 there is largely just a XAML based UI which displays a frame count of how many IR and how many Depth frames it thinks it has sent over the network and there’s some code behind plus a couple of supporting classes along with a dependency on the code in the SharedCode project which provides the routines for establishing the socket communications along with some common code around manipulating the buffers.

The “UI” ends up being a rather undramatic screen; 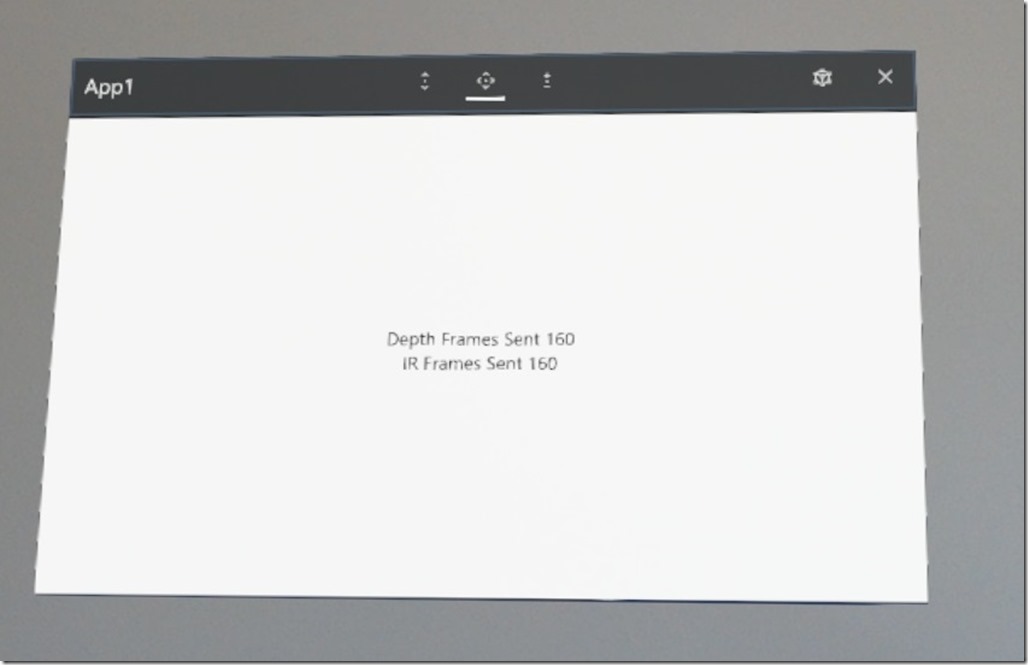 In terms of the buffers, I make no attempt to compress them or anything like that and I simply send them over the network pre-fixed with a header including the size, buffer type (depth/infrared), width, height. I do not attempt to encode them as PNG/JPEG or similar but just leave them in their raw format which for these 2 streams is Gray8 and Gray16.

On the desktop side, I made a second UWP XAML based app and added it to the solution and gave it a dependency on the SharedCode folder so that it could also use the socket and buffer-access routines. 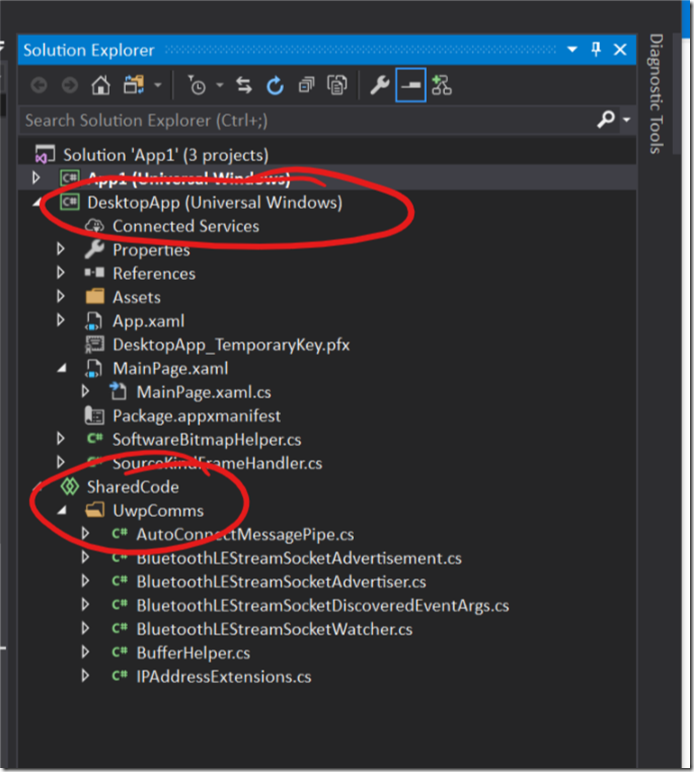 This app displays a blank UI with a couple of XAML Images backed by having their Source property set to instances of SoftwareBitmapSource.

On start up, the app waits for a Bluetooth LE advertisement such that it can automatically connect to the socket listening on the HoloLens.

Once connected, the app picks up the frames sent down the wire, interprets them as depth/infrared and turns them into SoftwareBitmap instances in BGRA8 format such that it can update the XAML Images with the new bitmaps by simply using SoftwareBitmapSource.SetBitmapAsync().

Here’s a quick screenshot – the depth data on the left is (I think) coming from the 30fps near-depth camera and it’s perhaps only just visible here so maybe I need to process it to brighten it up a little for display but I can see what it’s showing on my monitor; 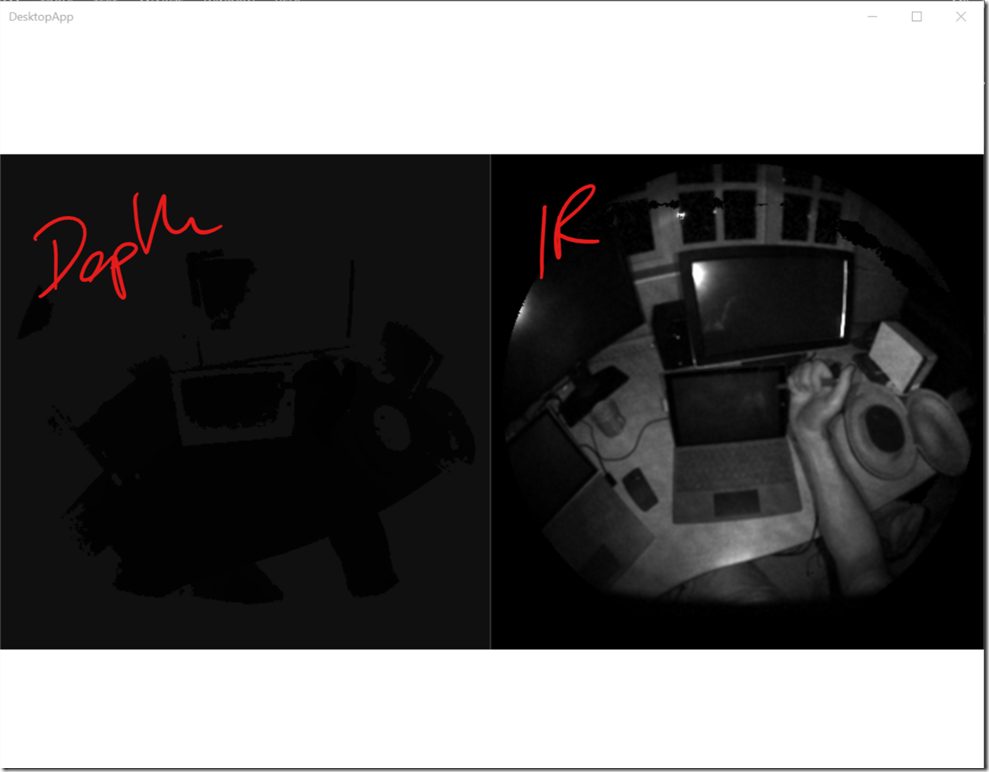 and the IR on the right is much clearer to see.

So, it’s not going to win any UX or implementation awards

but it seems to “just about work”.

I’ve only really had a chance to glance at this and take a first-step but I’m pleased that I was able to grab frames so easily. It would be “nice” to put a communication protocol between the 2 apps here such that the desktop app could “ask” for different streams and perhaps at different intervals and it’d also be “nice” to display some of the other streams so perhaps I’ll look into that for subsequent posts and follow up with some modifications.

The code for this post is pretty rough and experimental so please keep that in mind but I shared it here on github;

so feel free to take, explore and fix etc.