and so please read that post if you want to get the context and, importantly, for the various caveats and links that I had in that post about working with ‘research mode’ in the Redstone 4 Preview on HoloLens.

I updated the code from the previous post to provide what I think is a slightly better experience in that I removed the attempt to display multiple streams from the device at the same time and, instead, switched to a model where I have the app on the device have a notion of the ‘current stream’ that it is sending over the network to the receiving desktop app.

In that desktop app, I can then show the initial stream from the device and allow the user to cycle through the available streams as per the screenshots below. The streams are still not being sent to the desktop at their actual frame rate but, as before, on a timer-based interval which is hard-wired into the HoloLens app for the moment.

Making these changes meant altering the code such that it no longer selects one depth and one infrared stream but, instead, attempts to read from all depth, infrared and colour streams. When the desktop app connects, it is returned the descriptions for these streams and it then has buttons to notify the remote app to switch on to the next/previous stream in its list.

Here’s how that looks across the 8 different streams that I am getting back from the device. 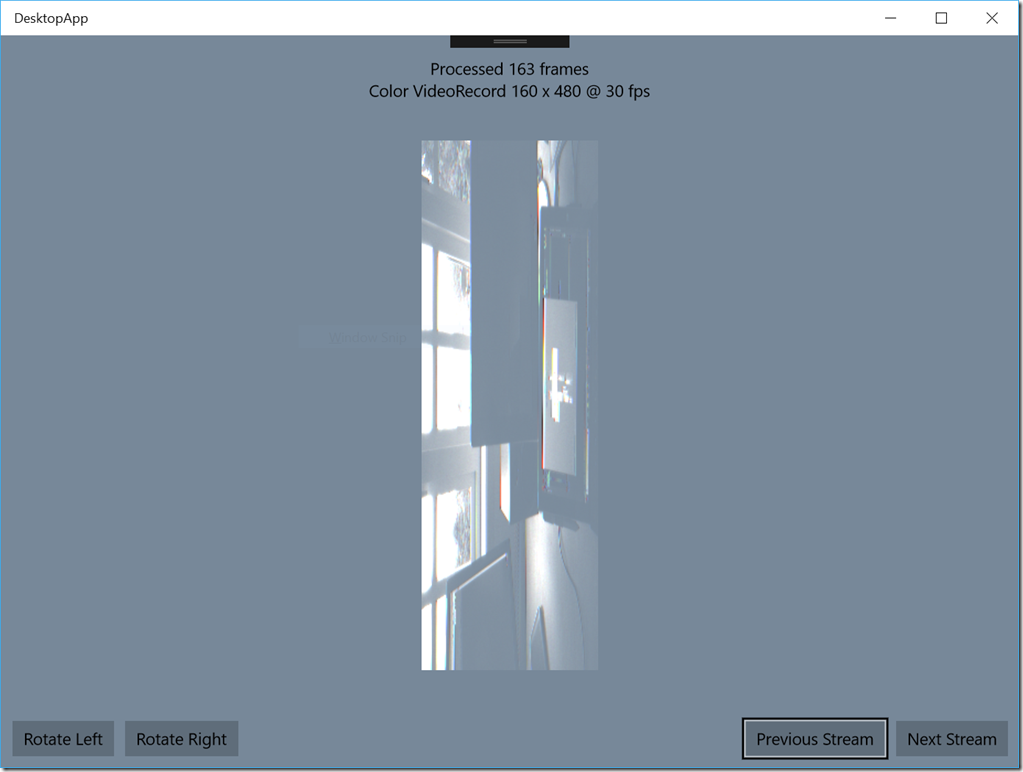 This second stream would again appear to be environment tracking taking in a scene that’s to the left of my gaze and again rotated 90 degrees anti-clockwise; 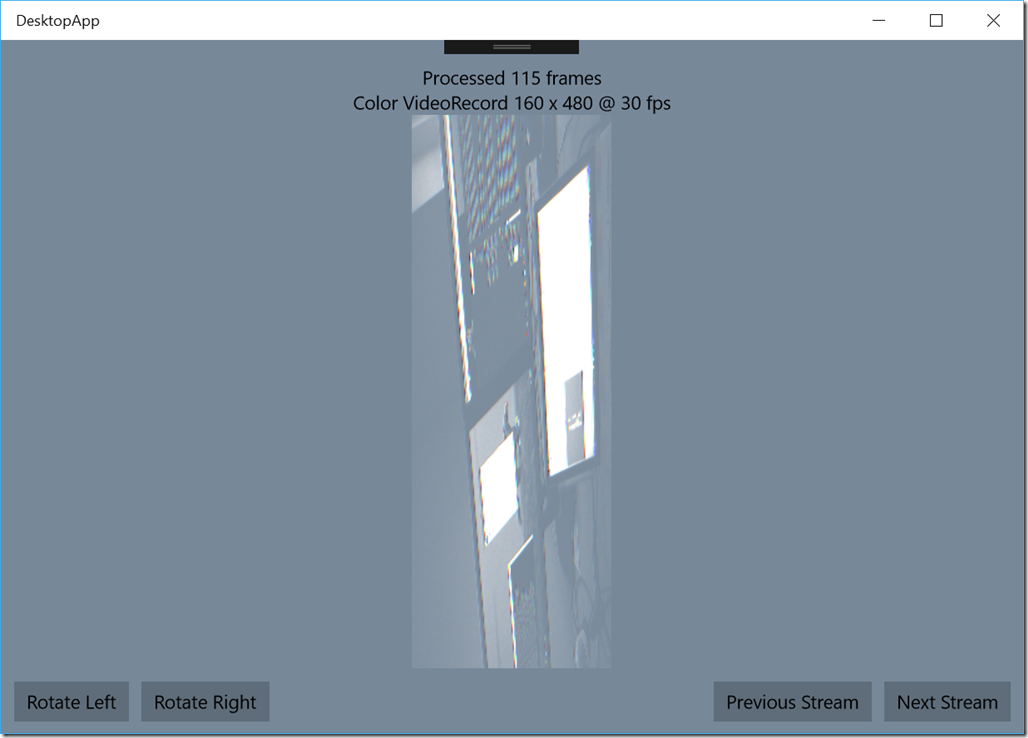 This next stream is a depth view, looking forward although it can be hard to see much in there without movement to help out.

I’m not sure that I’m building the description of this stream correctly because my code says 15fps whereas the documentation seems to suggest that depth streams are at either 1fps or 30fps so perhaps I have a bug here but this depth stream feels like it is at a wider aperture and so perhaps this is the stream which the docs describe as;

but that’s only a guess based on what I can visually see in this stream; 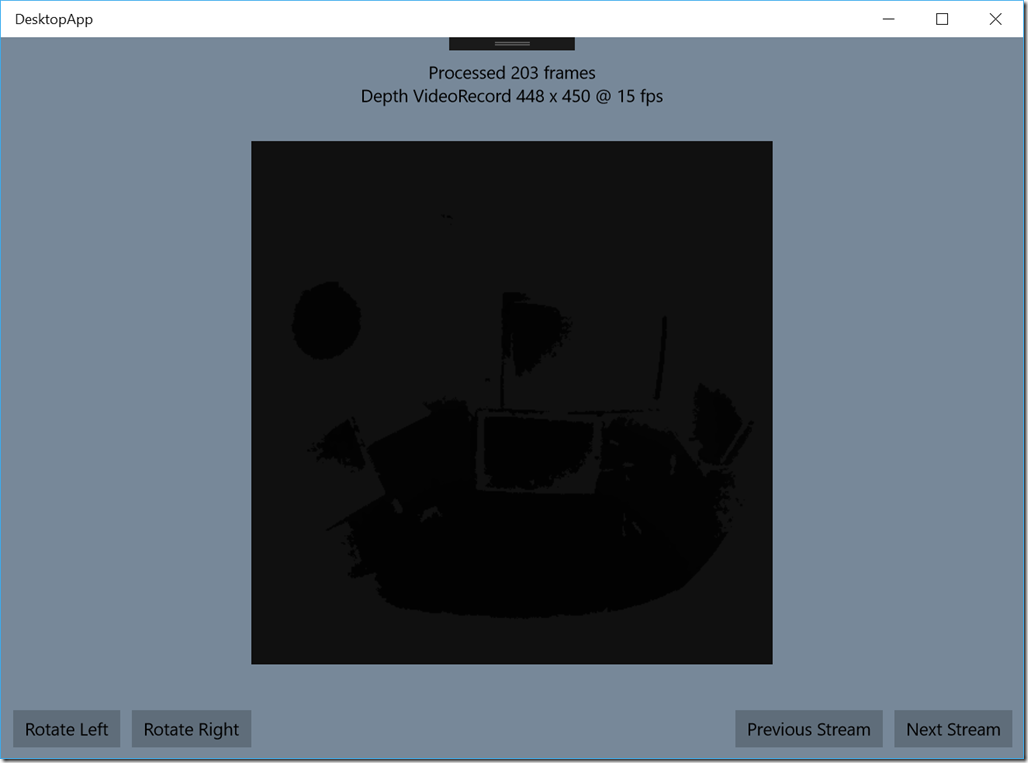 and the next stream that I get is an infrared stream at 3 fps with what feels like a narrow aperture; 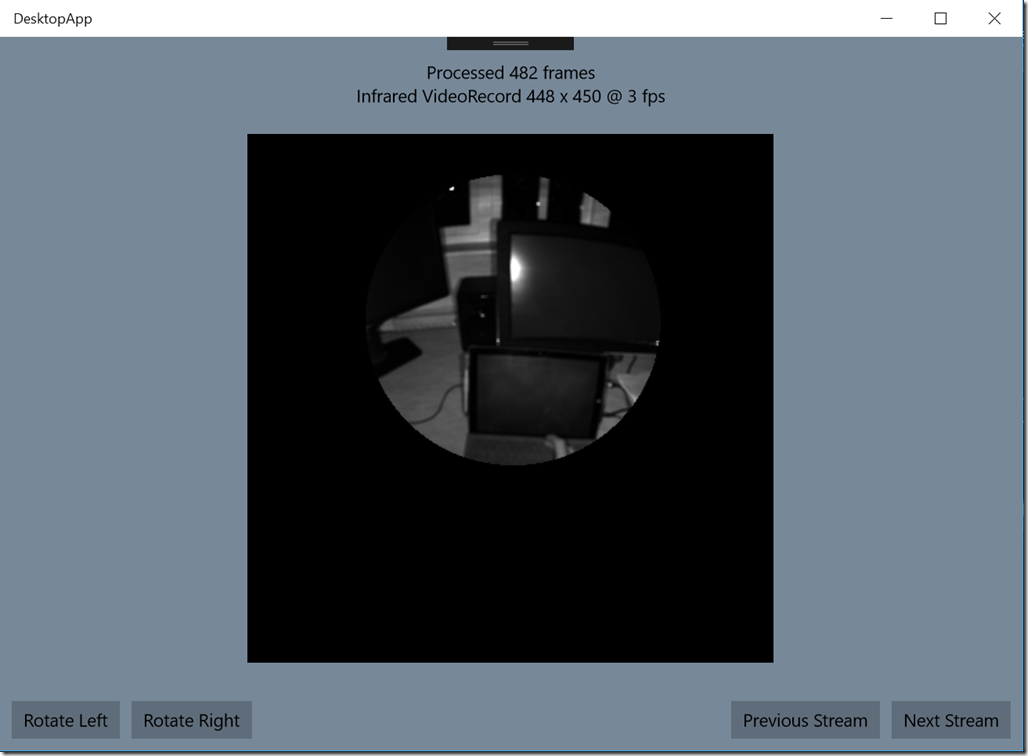 with the follow-on stream being depth again at what feels like a narrow aperture; 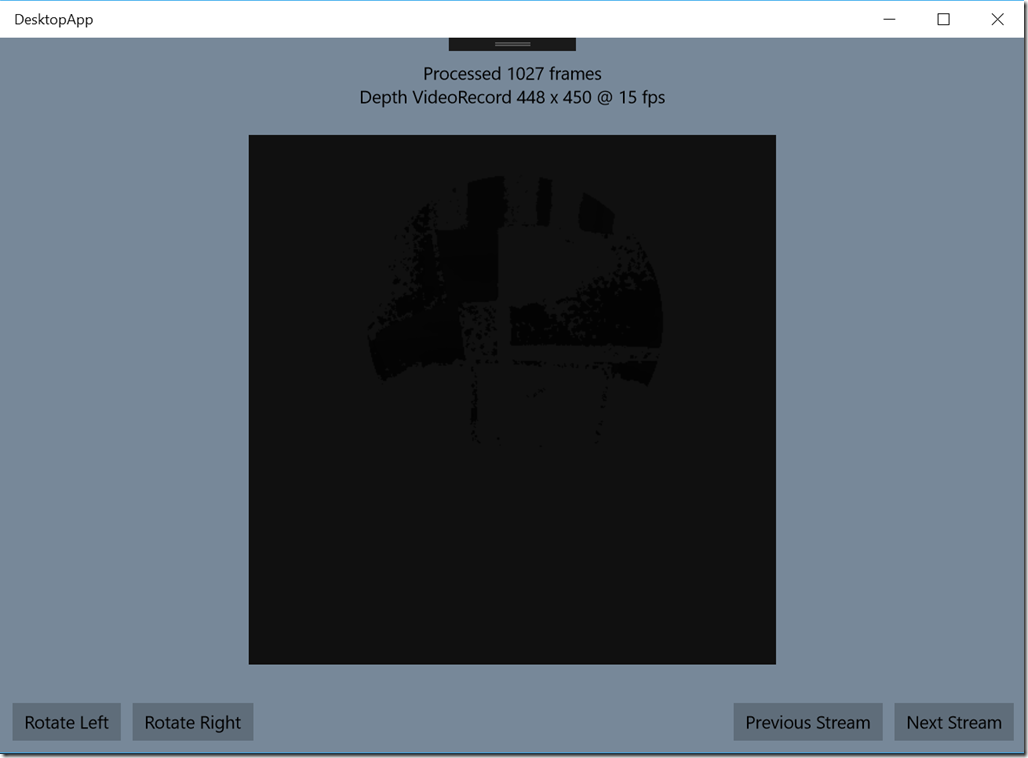 and then I have an environment view to the right side of my gaze rotated 90 degrees anti-clockwise; 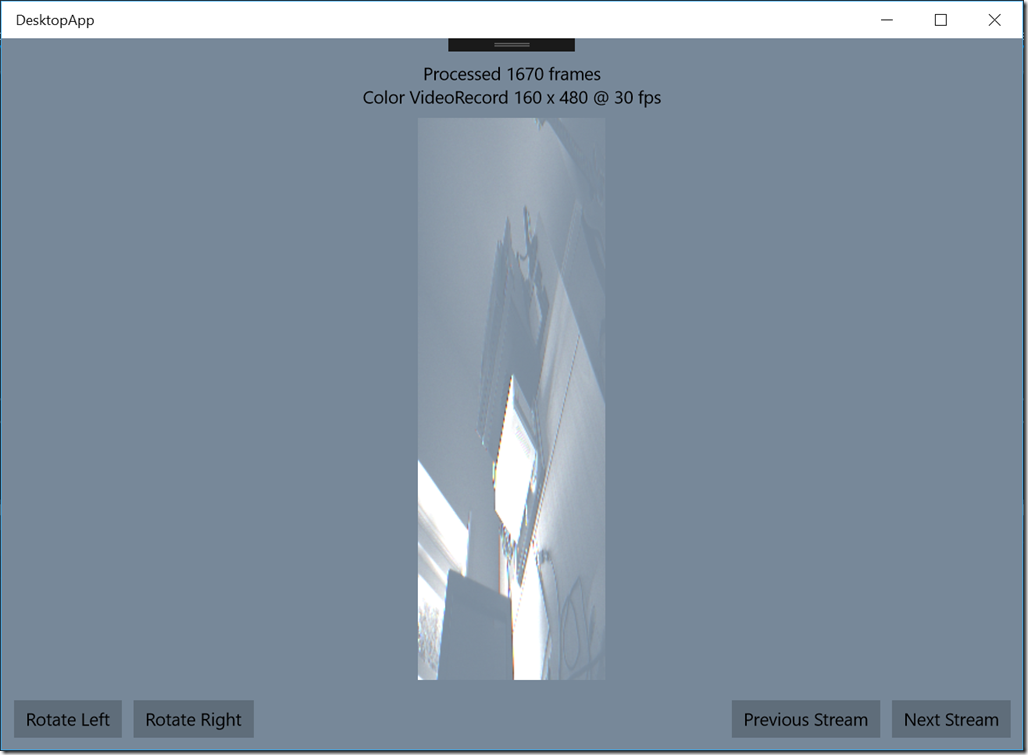 and another environment view which feels more of less ‘straight ahead’, rotated 90 degrees anti-clockwise; 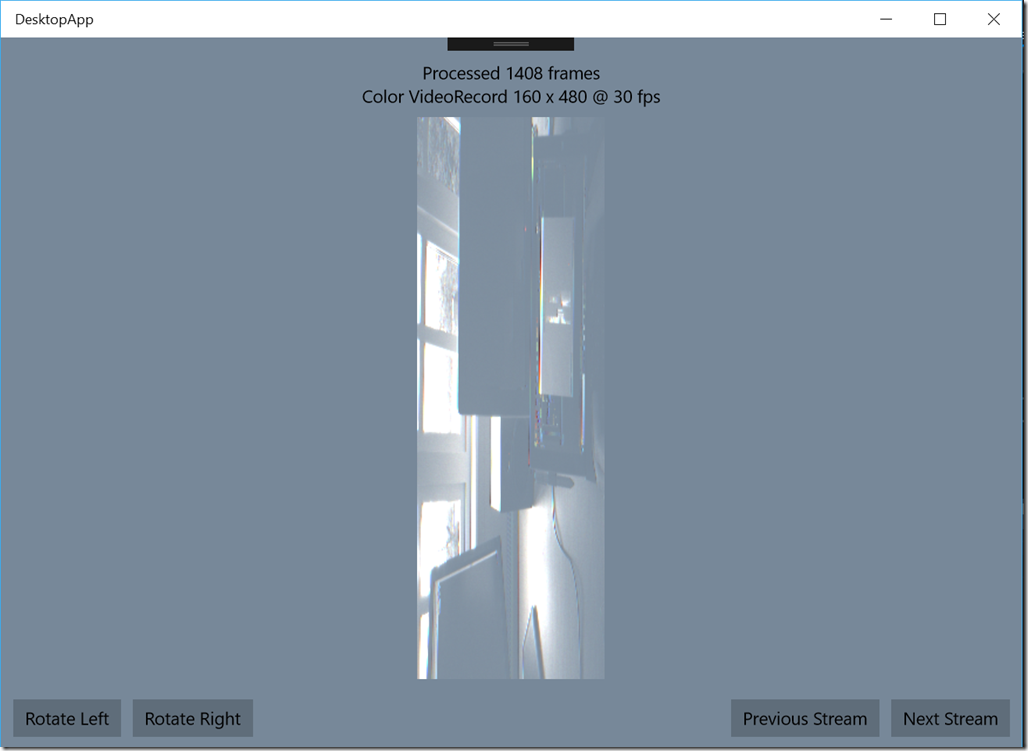 and lastly an infrared view at 3 fps with what feels like a wider aperture; 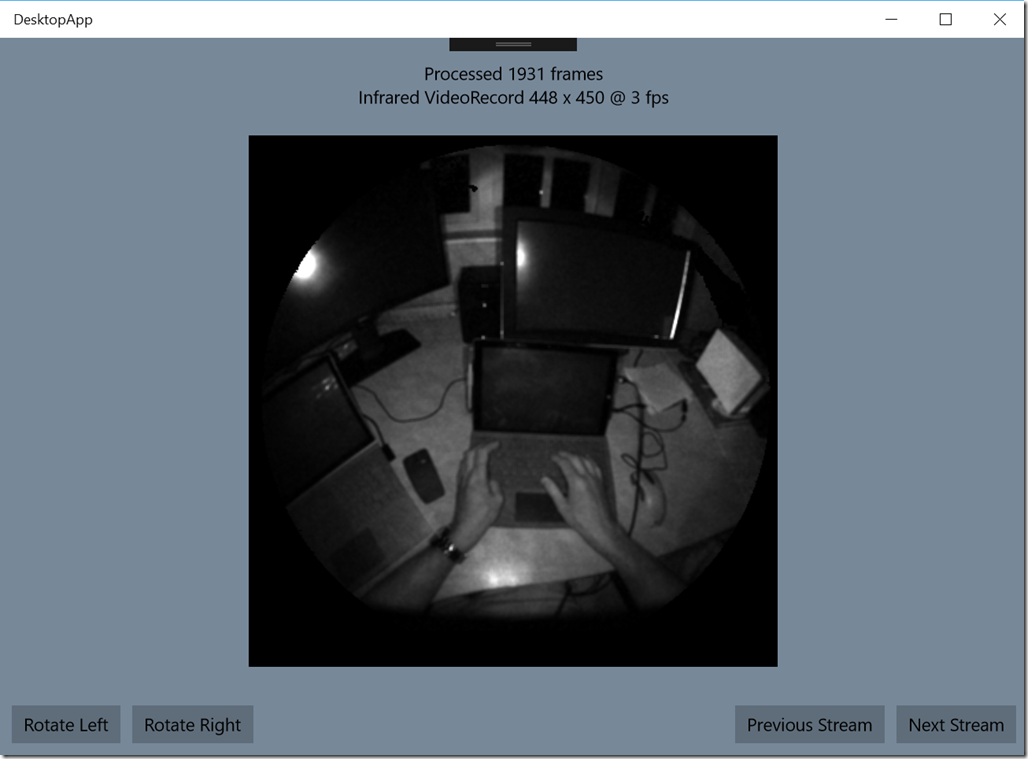 This code feels a bit more ‘usable’ than what I had at the end of the previous blog post and I’ve tried to make it a little more resilient such that should one end of the connection drop, the other app should pause and be capable of reconnecting when its peer returns.

The code for this is committed to master in the same repo as I had in the previous post;

Feel free to take that, experiment with it yourself and so on but keep in mind that it’s a fairly rough experiment rather than some polished sample.