Following up on my previous post, I wanted to take the very basic test code that I’d got working ‘reasonably’ on UWP on my desktop PC and see if I could move it to HoloLens running inside of a Unity application.

The intention would be to preserve the very limited functionality that I have which goes something like;

That’s what I currently have in the signalling branch here and the previous blog post was about abstracting some of that out such that I could use it in a different environment like Unity.

Now it’s time to see if that works out…

Getting Some Early Bits to Work With

In order to even think about this I needed to try and pick up a version of UWP webRTC that works in that environment and which has some extra pieces to help me out and, as far as I know, at the time of writing that involves picking up bits that are mentioned in this particular issue over on github by the UWP webRTC team;

and there are instructions in that post around how to get hold of some bits;

Instructions for Getting Bits

and so I followed those instructions and built the code from that branch of that repo.

From there, I’ve been working with my colleague Pete to put together some of those pieces with the pieces that I already had from the previous blog posts.

First, a quick look around the bits that the repo gives us…

As is often the case, this process looks like it is going to involve standing on the shoulder of some other giants because there’s already code in the UWP webRTC repo that I pointed to above that shows how to put this type of app together.

The code in question is surfaced through this solution in the repo;

Inside of that solution, there’s a project which builds out the equivalent of original XAML+MediaElement PeerCC sample but in a modified way which here doesn’t have to use MediaElement to render and that shift in the code here is represented by its additional Unity dependencies; 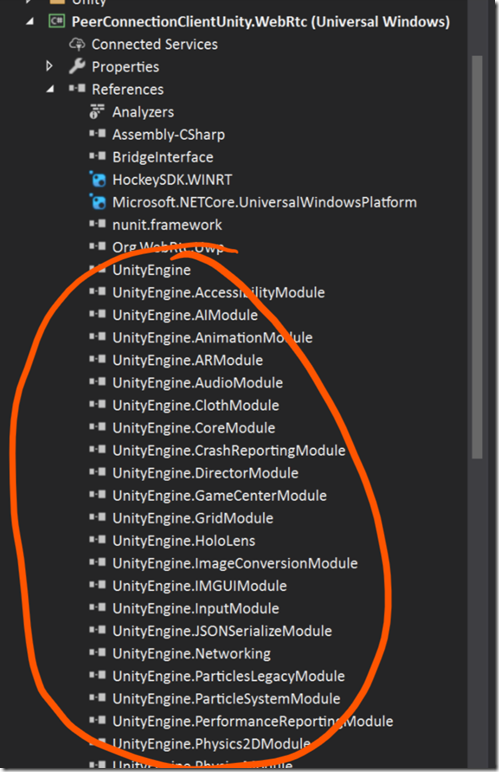 This confused me for a little while – I was wondering why this XAML based application suddenly had a big dependency on Unity until I realised that what’s been done here to show that media can be rendered by Unity is that the original sample code has been modified such that (dependent on the conditional compilation constant UNITY) this app can either render media streams;

Now, I’ve failed to get this sample to run on my machine which I think is down to the versions of Unity that I’m running and so I had to go through a process of picking through the code a little ‘cold’ but in so far as I can see what goes on here is that there are a couple of subprojects involved in making this work…

This project was already present in the original XAML-based solution and in my mind this is involved with wrapping some C++/CX code around the webrtc.lib library in order to bring types into a UWP environment. I haven’t done a delta to try and see how much/little is different in this branch of this project over the original sample so there may be differences. 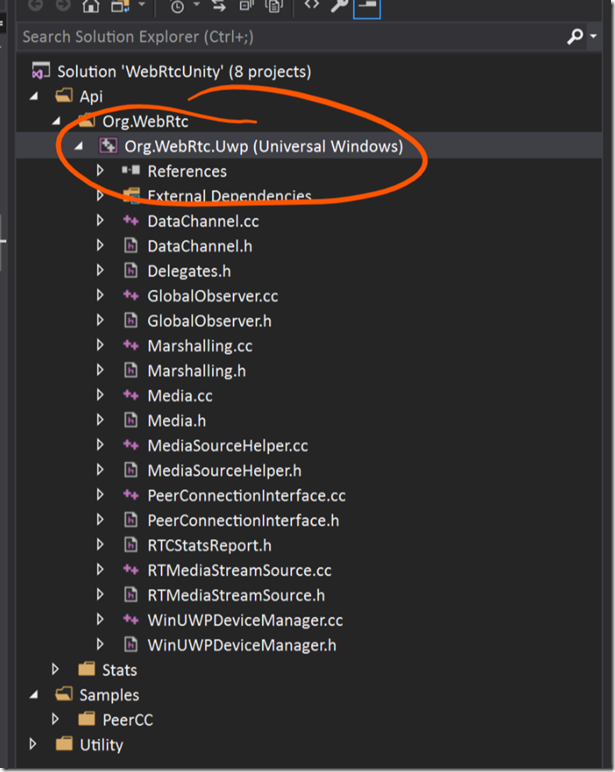 Then there’s 2 projects within the Unity sample’s MediaEngine folder which I don’t think were present in the original purely XAML-based PeerCC sample; 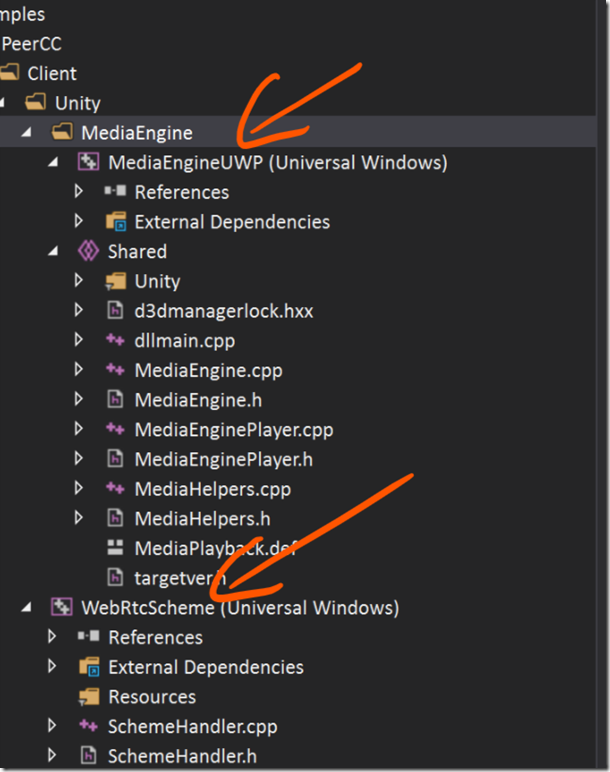 The MediaEngineUWP and WebRtcScheme projects build out DLLs which seem to take on a couple of roles although I’m more than willing to admit that I don’t have this all worked out in my head at the time of writing but I think they are about bridging between the Unity platform, the Windows Media platform and webRTC and I think they do this by;

The wiring together of this MediaEnginePlayer into the media pipeline is a little opaque to me but I think that it follows what is documented here and under the topic Source Resolver here. This seems to involve the code associating a URL (of form webrtc:GUID) with each IMediaStream and having an activatable class which the media pipeline then invokes with the URL to be linked up to the right instance of the player.

That may be a ‘much less than perfect’ description of what goes on in these projects as I haven’t stepped through all of that code.

What I think it does mean though is that the code inside of the WebRtcScheme project requires that the .appxmanifest for an app that consumes it needs to include a section that looks like;

I looked into another project within that github repo which is a Unity project contained within this folder;

There’s a Unity scene which has a (UI) Canvas and a couple of Unity Raw Image objects which can be used to render to;

and a Control script which is set up to PInvoke into the MediaEngineUWP to pass the pieces from the Unity environment into the DLL. That script looks like this;

Plugging Together the Pieces

Pete put together a regular Unity project targeting UWP for HoloLens and in the scene at the moment we have only 2 quads that we try to render the local and remote video to.

and then there’s an empty GameObject named Control with a script on it configured as below; 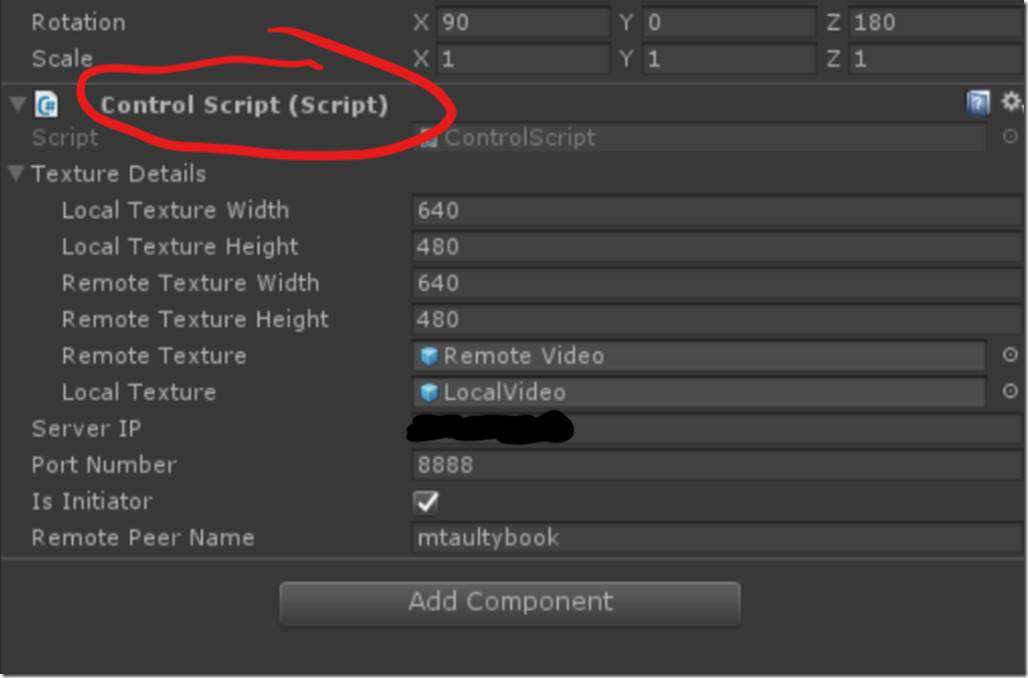 and you can see that this configuration is being used to do a couple of things;

Pete re-worked the original sample code to render to a texture of a material applied to a quad rather than the original rendering to a 2D RawImage.

Now, it’s fairly easy to then add my conversation library into this Unity project so that we can make use of that code. We simply drop it into the Assets of the project and configure up the appropriate build settings for Unity; 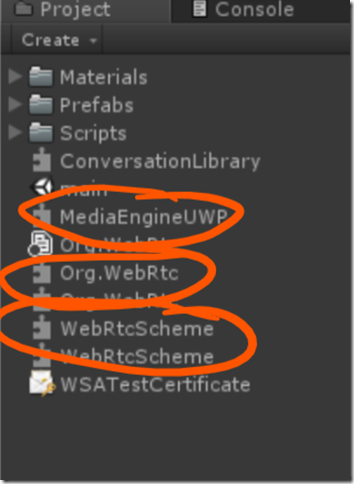 and the job then becomes one of adapting the code that I wrote in the previous blog post to suit the Unity environment which means being able to implement the IMediaManager interface that I came up with for Unity rather than for XAML.

How to go about that? Firstly, We took those PInvoke signatures from the VideoControlSample and put them into a separate static class named Plugin.

Secondly, we implemented that IMediaManager interface on top of the pieces that originated in the sample;

Naturally, this is very “rough” code right now and there’s some hard-coding going on in there but it didn’t take too much effort to plug these pieces under that interface that I’d brought across from my original, minimal XAML-based project.

So…with all of that said…

Firstly, you might notice in the code above that audio is hard-coded to be switched off because we currently have a crash if we switch audio on and it’s some release of some smart pointer in the webRTC pieces that we haven’t yet tracked down.

Minus audio, it’s possible to run the Unity app here on HoloLens and have it connect via the sample-provided signalling service to the original XAML-based PeerCC sample running (e.g.) on my Surface Book and video streams flow and are visible in both directions.

Here’s a screenshot of that “in action” from the point of view of the desktop app receiving video stream from HoloLens; 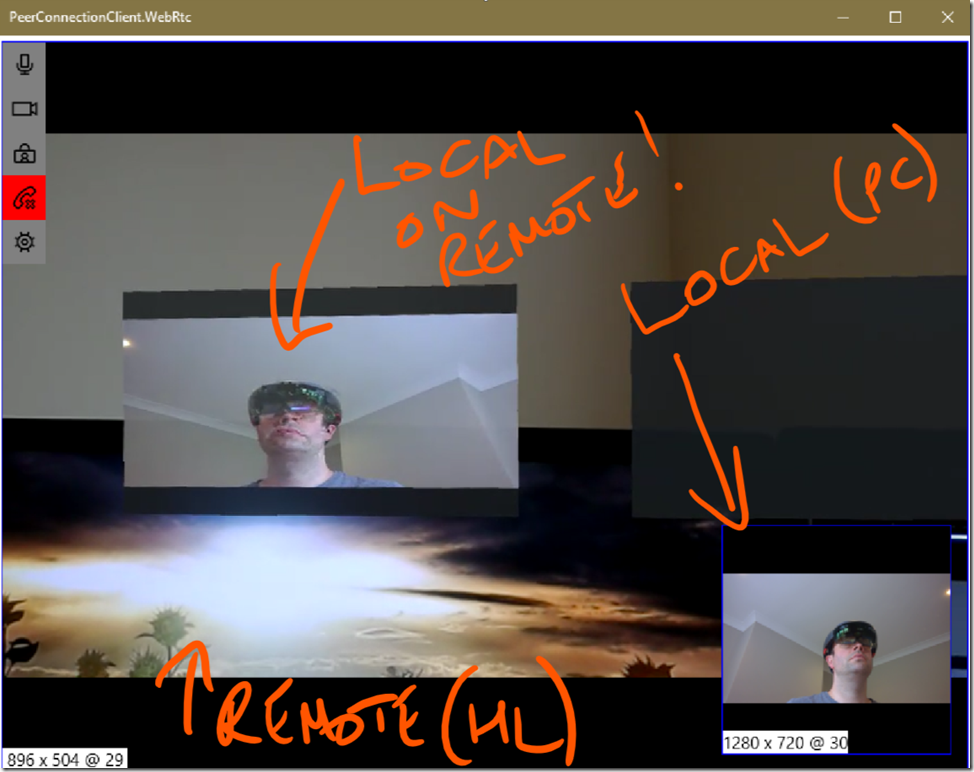 and that screenshot is display 4 things;

You might see some numbers in there that suggest 30fps but I think that was a temporary thing and at the time of writing the performance so far is fairly bad but we’ve not had any look at what’s going on there just yet – this ‘play’ sample needs some more investigation.

If you’re interested in following these experiments along as we go forward then the code is in a different location to the previous repo as it’s over here on Pete’s github account;

Feel free to feedback but, of course, apply the massive caveats that this is very rough experimentation at the moment – there’s a long way to go