A follow-up to my previous post around experiments with shared holograms using Azure blob storage and UDP multicasting techniques.

I doubt that anyone’s following along in great detail

but at the end of “Part 2” in this little series of posts I had ended the post with a bit of a “to do” list on my experiments which was as below;

I wanted to return and make some notes on that last point around a ‘memory’.

Prior to this post, I’ve set up some scripts and a library such that code based on my scripts running on one HoloLens device can be used to dynamically instantiate holograms in various places around the physical world and the scripts make it relatively easy to;

and that all seems to work reasonably well.

However, there’s a lack of ‘memory’ in the sense that if an app based on this code was to run on one device and take actions such as creating, transforming, deleting holograms prior to the app running on a second device then there’s no mechanism via which that second device can join the scene and catch up with what’s been happening on the first device.

There’s no way to sync beyond having all the apps running at the same time which isn’t very realistic.

I wanted to try and address this – there’s no doubt lots of different ways of doing it but I considered;

I went with the 3rd option as it felt like a relatively small change to what I already had in my code.

With that in mind, I didn’t make any changes to my MessagingLibrary project but I added new messages into the Unity project; 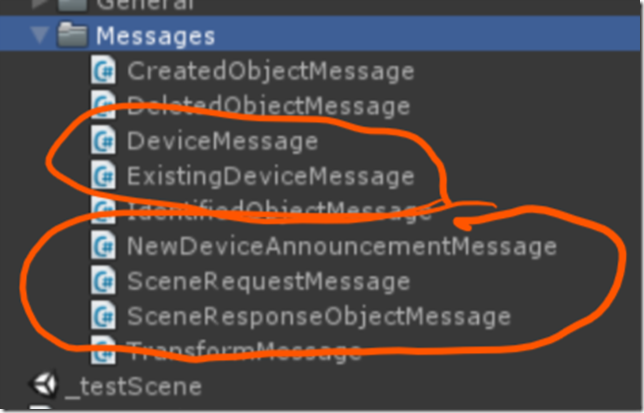 With the essential scheme being something along the lines of;

The SceneResponseObjectMessage is essentially the same as the initial CreatedObjectMessage which is multicast when the Create() API creates a shared hologram and so the handling of those messages doesn’t require lots of new code – it’s the same code that would handle the creation messages if the receiving app had been alive at the time that the holograms were created.

The changes to send/receive/process these messages then become relatively minor and the code’s up to date on github.

I also updated the console-based test application that I’ve been using to test out the code when only running with one HoloLens although I must admit that the code in that application is perhaps only really usable by me – it’d need some detailed explanation for someone else to pick it up and figure out what the heck I had in mind for using this test application but it has helped a lot along the way.

I’m not planning to add more code into this series of posts. The only addition that I’d like to make (beyond testing properly on multiple devices

) is to add a better test scene.

The one that I have in the Unity project really is only there for me to test out my code, I’d like to replace it with one that someone coming new to this code could easily run, understand and use to get a basic shared hologram app up and running on multiple devices in a short time. If I get a chance to look into this then I’ll add one more post to this series when I’ve got that new test scene put in place…