Following up on my previous post, one of the “to do” items was to allow a hologram to move, rotate, scale and have that change in its transform carried across the network to other devices.

I’m going to assume for this post that the hologram is not going to want to move so much as to cause it to change its parent and move to another world-anchored parent as that’d require more work right now so I’m thinking of small movements relative to the parent object that are reflected by changes in the local position, rotation and scale properties of a transform.

I added a settable property to my SharedHologramsController to flag whether the code should attempt to synchronise transforms on the shared objects that it has created; 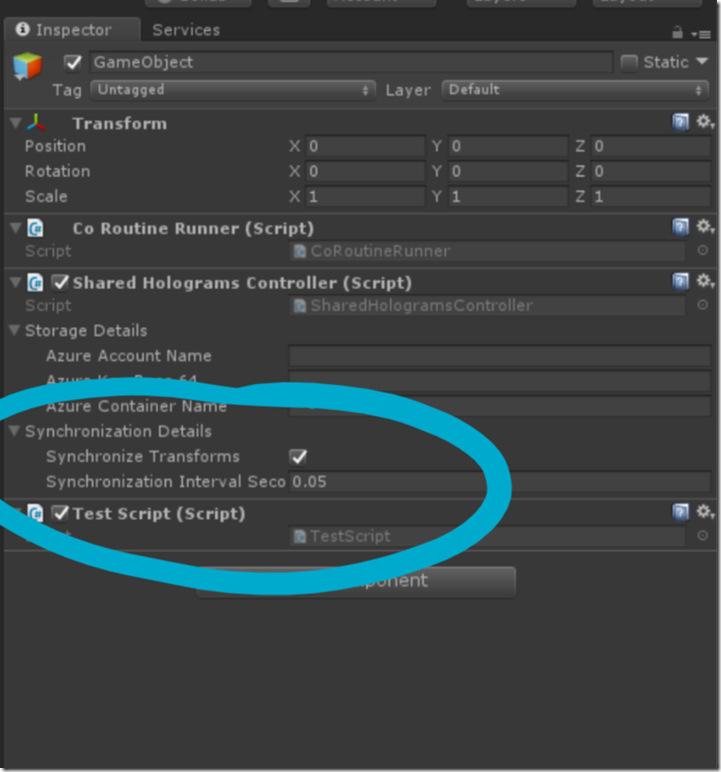 and an interval at which to attempt synchronisation.

Naturally, a lot of GameObjects being shared over the network with a high interval is going to equate to a lot of network messages so there’s a trade-off to be made there.

I then added a MonoBehaviour derived script to actually poll a GameObject and watch for changes to its Transform.LocalPosition, LocalRotation and LocalScale properties before dispatching them over the network using the TransformMessage message that already existed in the project.

That script is called TransformSynchronizer and it’s fairly simple (and perhaps too simple!

That’s all the changes to enable that sort of behaviour but I’d really like to test it properly with multiple devices as so far I’ve only been able to use the approach that I mentioned in an earlier post of having the HoloLens multicast messages to a console application which then sends them back again as a way of simulating a second device.

To start to test this out, I modified the test scene in the Unity project to add a behaviour such that the first tap on a cube will start it slowly rotating whereas the second tap on a cube will now delete it. That let me test changes to the cube’s rotation changing and I need to add some more code to test out changes to position and scale but rotation seems to work “reasonably”.

All of that code is contained in the TestScript in the Unity project.

I’ll make subsequent updates if I find that changes to local position and local scale don’t behave in a suitable way.