I’ve written a number of posts about the idea of shared holographic experiences including the posts below;

Experiments with Shared Holographic Experiences and AllJoyn (Spoiler Alert- this one does not end well!)

It sometimes feels like I can’t leave this topic alone

but that’s perhaps to be expected as I’ve seen a lot of developer interest in applications that offer a shared holographic experience and so maybe it’s right that I keep coming back to it.

Additionally, when I’ve worked with developers to set up shared holograms in their applications I’ve found that they sometimes get bogged down in the enabling technologies that underpin the Mixed Reality Toolkit (for Unity) such as UNET or the networked sharing service.

This is the first in a small series of posts taking a look at that type of experiment and it starts with thinking about what needs to be passed over the network.

In order to enable shared holograms, we need some kind of networking that enables two things;

There are many, many ways in which this can be achieved and some of them appear in the previous posts that I’ve referred to above.

For this small set of posts I’m going to use two technologies to try and implement 1 and 2 above;

In many ways, this is similar to what I did in the blog post;

Experiments with Shared Holographic Experiences and AllJoyn (Spoiler Alert- this one does not end well!)

except that I’m taking AllJoyn out of the equation and using UDP multicasting instead.

Against that backdrop, I needed a library to enable UDP multicasting of messages between devices and so I made one…

I wrote a quick library for UDP Multicasting of messages and dropped it onto github over here.

There’s nothing radical or clever in there, the intention is to multicast send single UDP packet-sized messages around the network making it easy to send them and pick them up again (on different machines, the library doesn’t currently support multiple processes on the same machine).

I wanted the library to target both UWP (specifically SDK level 14393 for HoloLens) and .NET Framework (specifically I’ve targeted the “Unity 3.5 .net Subset BCL”) and so inside the solution are a few projects; 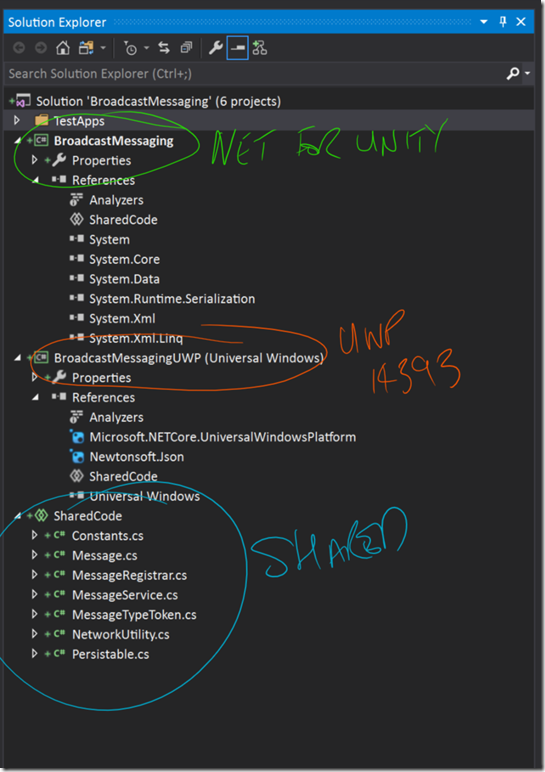 and so the code is 100% in the SharedCode folder referenced from the other 2 projects and at the end of the build process out should pop a library targeting .NET 3.5 for Unity and another targeting UWP.

Despite the (bad!) naming of the solutions and projects in the screenshot above, both projects should build a library called BroadcastMessaging.dll and that’s intentional because it will hopefully allow me to use the .NET 3.5 version as a placeholder library for Unity’s editor while the UWP library will be the library actually used at runtime. Unity likes placeholder and replacement libraries to have the same name.

The way that the library is intended to work is by requiring both message senders and receivers to have common types derived from the the base class Message in the library, with any state serialized by overriding the Load/Save methods as below in this example message class below which is intended to carry around a GUID;

In fact, identification of a message type is done purely by its short, unqualified .NET type name and so MyNamespaceOne.MyMessage and MyNamespaceTwo.MyMessage would be confused by my library so, clearly, it could be a lot more robust than it currently is.

Once a message type is defined there’s a type called a MessageRegistrar which needs to know how to create these messages and so there’s a call to register them;

and once that is set up there’s a class named MessageService which does the work of sending/receiving messages and it’s instantiated as below;

I find that on my machines getting hold of that local IP address isn’t always “so easy” across .NET Framework and UWP so I added another type into my library to encode some process for trying to get hold of it;

and the library routine NetworkUtility.GetConnectedIpAddresses takes parameters controlling whether to only consider WiFi networks, whether to rule out networks that appear to be ‘virtual’ and which address family (IP4/6) to consider. I’m sure that this code will have problems on some systems and could be improved but it seems to work reasonably well on the PCs that I’ve tried it on to date.

With that all set up, the only remaining thing to do is to send messages via the MessageService and that code looks something like;

with the callback being an optional part of sending a message. I’ve used callbacks here rather than exposing Task-based asynchronous code because I want the API surface to be the same across .NET Framework 3.51 and UWP clients. For similar reasons, I ended up with some methods taking object based parameters as I struggled with some co/contravariance pieces across the two different .NETs.

Both applications create a GUID to identify themselves and then multicast it over the network, logging when they receive a message from somewhere else on the network.

You can see those “in action” ( 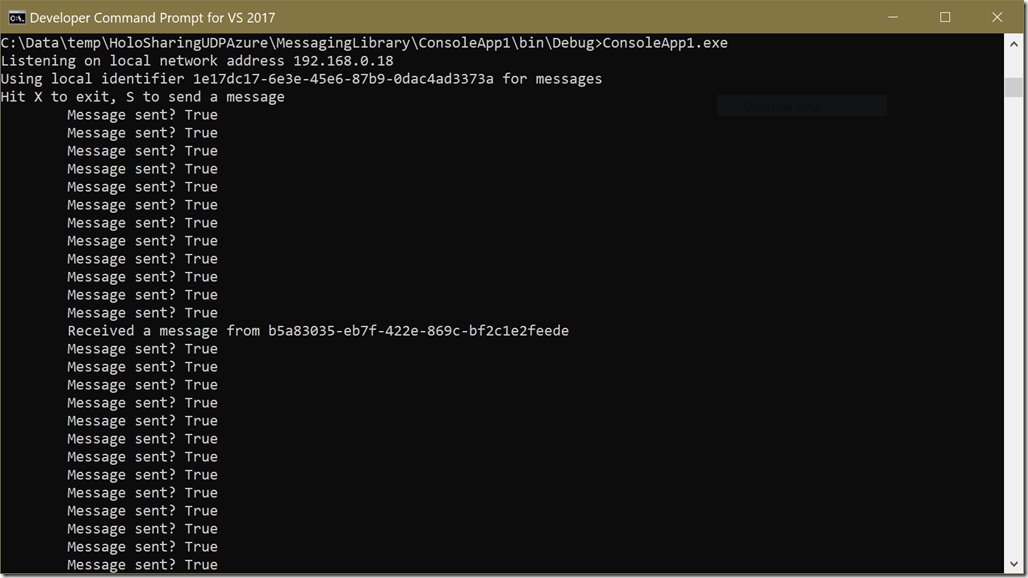 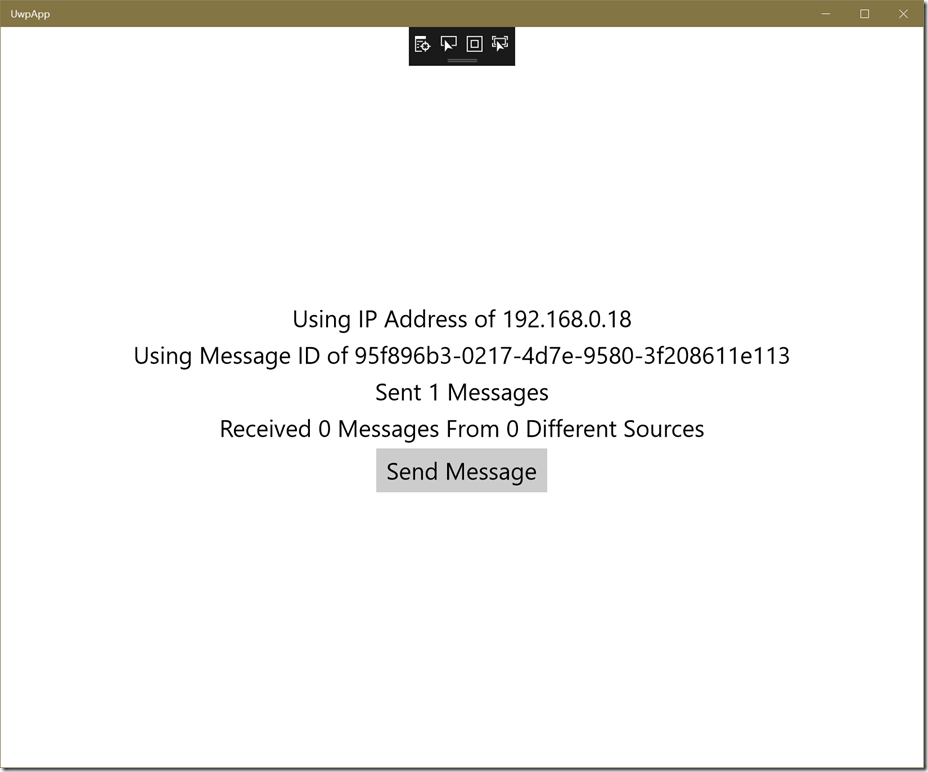 And that’s pretty much it for this post. In the next post, I’ll start to add some code inside of Unity that makes use of this layer and ties it in with Azure blob storage to build up the basics of some shared holograms.