Hands, Gestures and a Quick Trip to ‘Prague’

I said that if I ‘found time’ then I’d revisit that post and that code and see if I could make it work with the Kinect for Windows V2 sensor rather than with the Intel RealSense SR300 which I used in that post.

In all honesty, I haven’t ‘found time’ but I’m revisiting it anyway

I dug my Kinect for Windows V2 and all of its lengthy cabling out of the drawer, plugged it into my Surface Book and … it didn’t work. Instead, I got the flashing white light which usually indicates that things aren’t going so well.

Not to be deterred, I did some deep, internal Microsoft research (ok, I searched the web

) and came up with this;

Kinect Sensor is not recognized on a Surface Book

and getting rid of the text value within that registry key sorted out that problem and let me test that my Kinect for Windows V2 was working in the sense that the configuration verifier says; 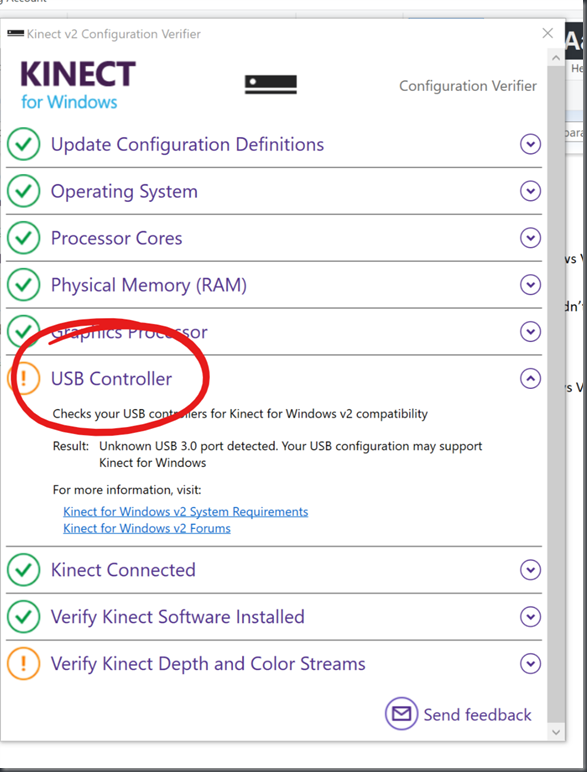 which after many years of experience I have learned to interpret as “Give it a try!”

and so I tried out a couple of the SDK samples and they worked fine for me and so I reckoned I was in a good place to get started.

However, the Project Prague bits were not so happy and I found they were logging a bunch of errors in the ‘Geek View’ about not being able to connect/initialise to either the SR300 or the Kinect camera.

This seemed to get resolved by me updating my Kinect drivers – I did an automatic update and Windows found new drivers online which took me to this version; 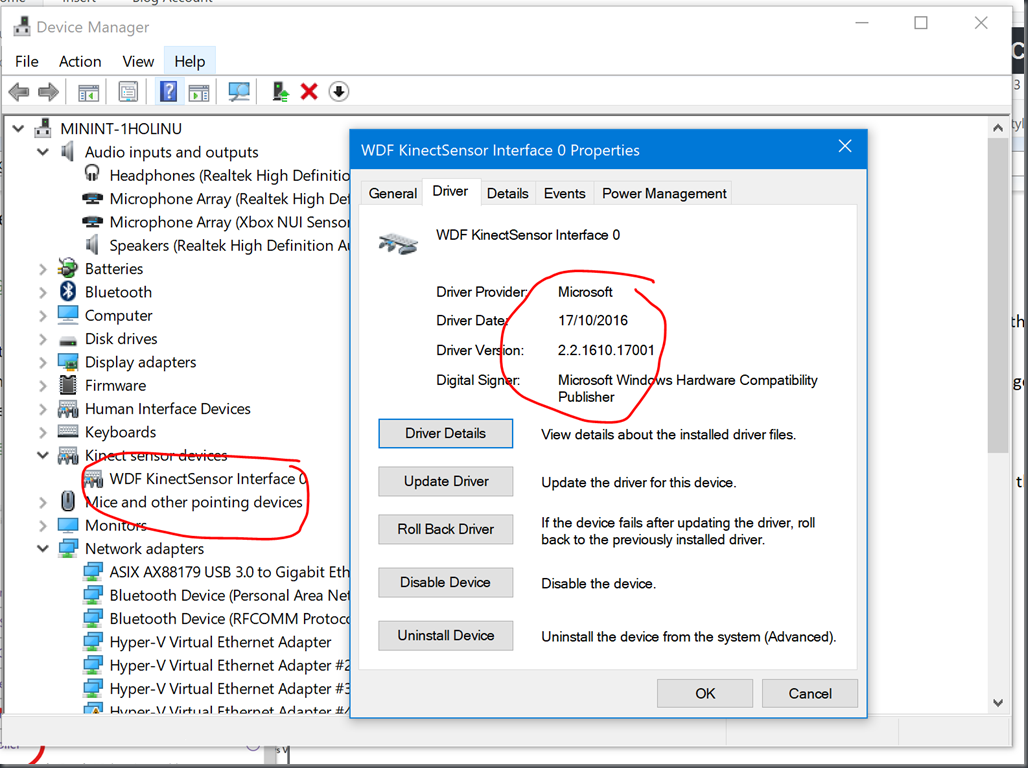 which I was surprised that I didn’t have already as it’s quite old but that seemed to make the Project Prague pieces happy and the Geek View is back in business showing output from Kinect; 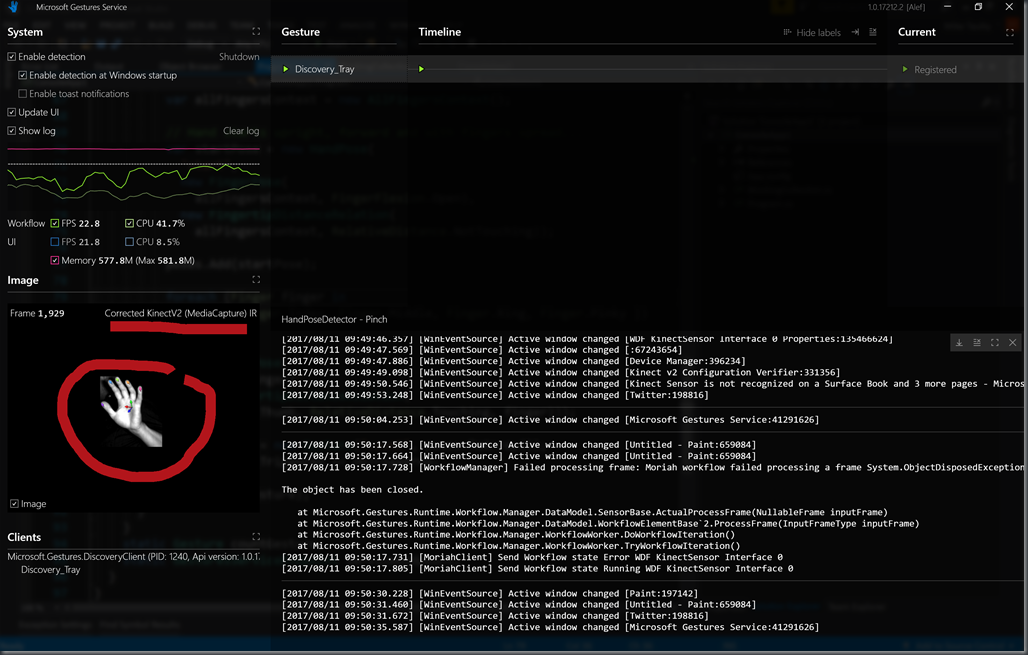 and from the little display window on the left there it felt like this operated at a range of approx 0.5m to 1.0m. I wondered whether I could move further away but that didn’t seem to be the case in the quick experiment that I tried.

The big question for me then was whether the code that I’d previously written and run against the SR300 would “just work” on the Kinect for Windows V2 and, of course, it does

Revisit the previous post for the source code if you’re interested but I found my “counting on four fingers” gesture was recognised quickly and reliably here; 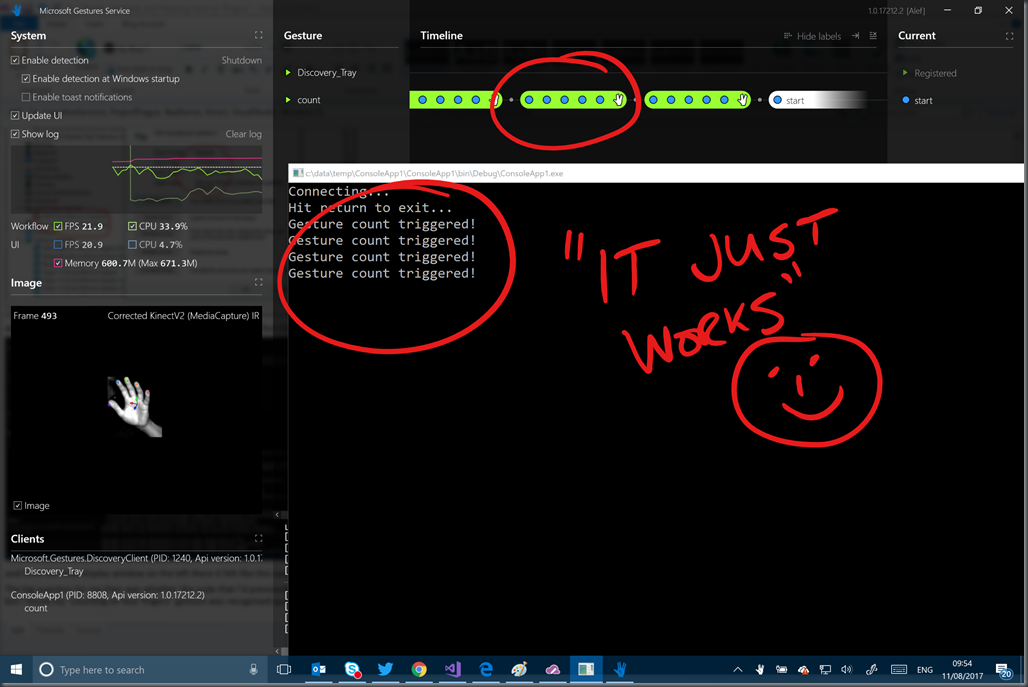 This is very cool – it’d be interesting to know exactly what ‘Prague’ relies on from the perspective of the camera and also from the POV of system requirements (CPU, RAM, GPU, etc) in order to make this work but it looks like they’ve got a very decent system going for recognising hand gestures across different cameras.