I’ve been slowly trying to catch up with what happened at //build via the videos on Channel9 focusing mainly on the topics around Windows 10 UWP and Mixed Reality with a sprinkling of what’s going on in .NET, C# and some of the pieces around Cognitive Services, identity and so on.

Given that //build was a 3 day conference, it generates a video wall worth of content which then takes a very long time to try and catch up with and so I expect I’ll still be doing some of this catching up over the coming weeks and months but I’m slowly making progress.

One of the many sessions that caught my eye was this one on changes to the packaging of UWP apps;

which talks about some of the changes that have been made in the Creators Update around breaking up UWP packages into pieces such that they can be installed more intelligently, dynamically and flexibly than perhaps they can today.

It’s well worth watching the session but if I had to summarise it I’d say that it covers;

As you might expect, there’s lots of additional levels of detail here so if you’re interested in these bits then some links below will provide some of that detail;

and there’s more generally on the App Installer Blog and additional interesting pieces in that //build session around possible future developments and how Microsoft Office ™ is making use of these pieces in order to be deliverable from the Windows Store.

The idea of ‘streaming installations’ seemed immediately applicable to me but I need to spend some more time thinking about optional packages because I was struck by some of the similarities between them and app extensions (more here) and I haven’t quite figured out the boundaries there beyond the ability of an optional package to deliver additional code (native) to an application which extensions can’t do as far as I’m aware.

Having got my head around streaming installations, I wanted to experiment with them and that’s where the rest of this post is going.

I wrote this tiny little “app” around the time of the UK “Future Decoded” show in late 2016 in order to demonstrate app extensions.

The essential idea was that I have this app which displays pictures from a group; 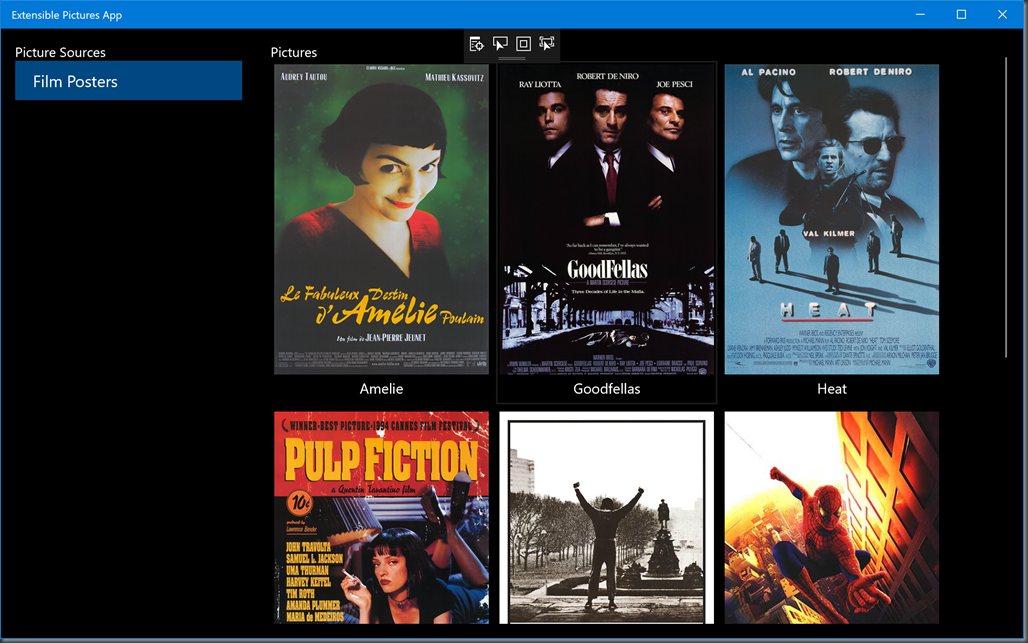 and there is 1 set of pictures built in – some film posters but I have two more sets of pictures under groupings of ‘Albums’ and ‘BoxSets’.

The original app used app extensions and so the ‘Albums’ and ‘BoxSets’ collections lived in another project providing an ‘extension’ to the content such that when the extension was installed on the system all of the 3 sets of content are loaded and the app looks as below; 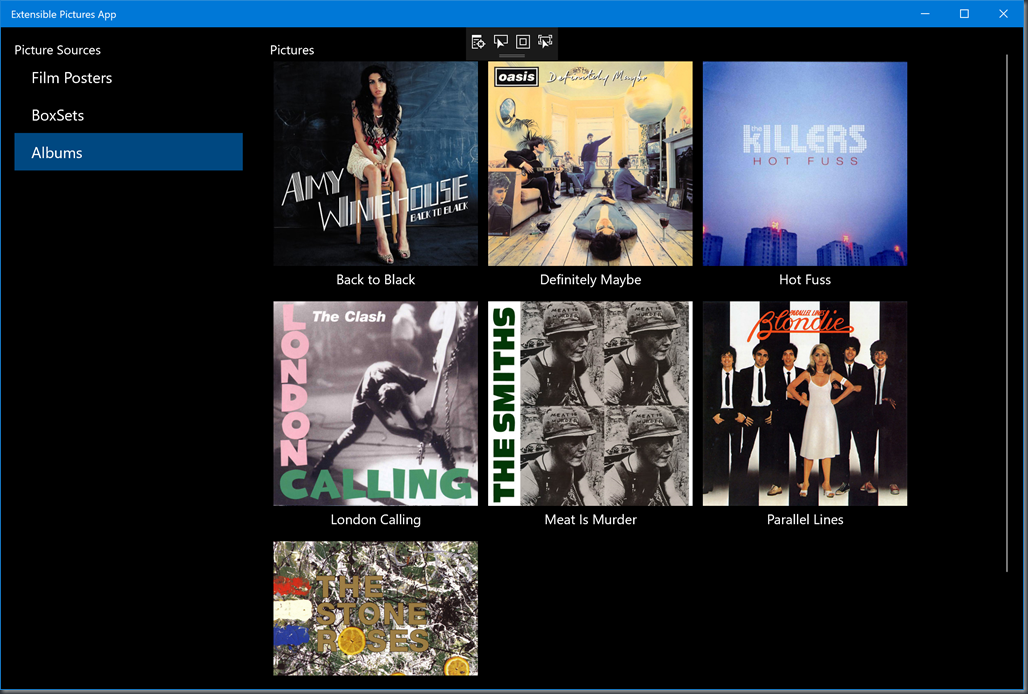 So, having this code kicking around it seemed like an obvious simple project that I could use to try out streaming installations on Creators Update.

Firstly, I brought all 3 of my content folders into the one project (i.e. Posters, Albums, BoxSets) as below; 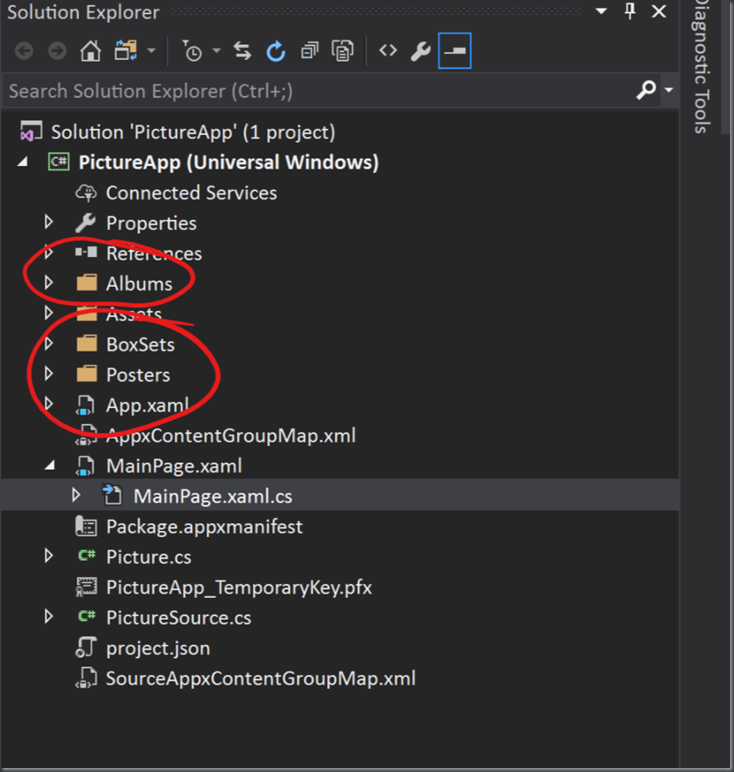 and then I set about authoring a SourceAppxContentGroupMap.xml file as covered in this MSDN article;

and I learned a couple of things there which were to firstly make sure that you set the right build action for that XML file; 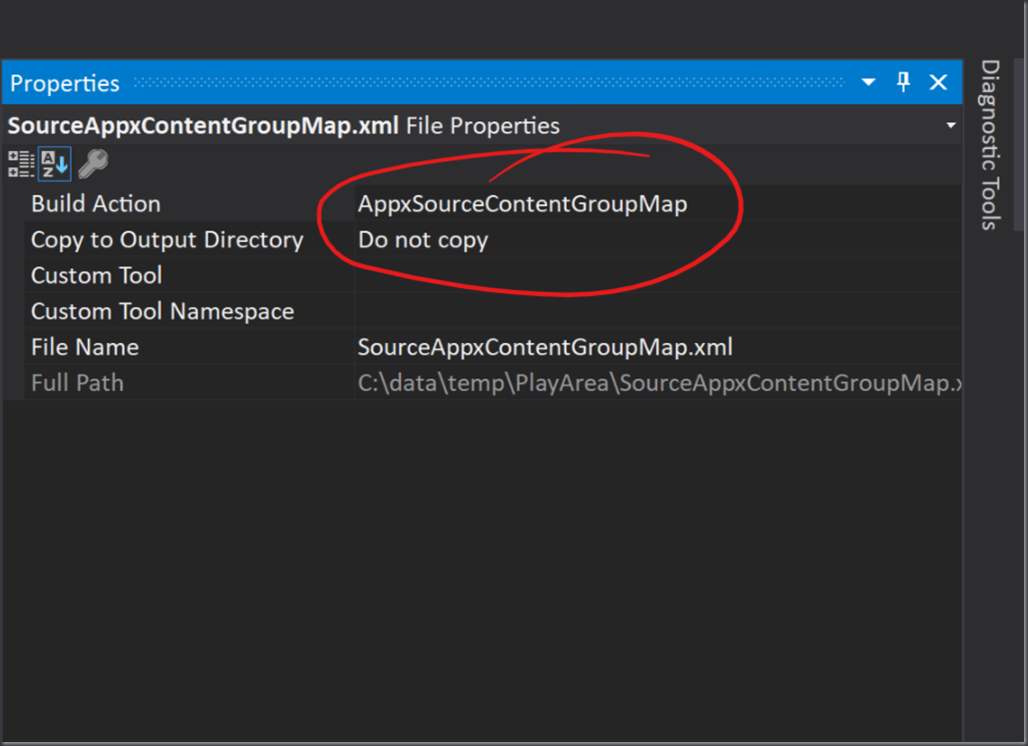 That right version on my system would come from;

at the time of writing although I ultimately let Visual Studio build the content group map and only used makeappx as part of experimenting.

My content group map looked as below – I essentially just define that everything for the application is required apart from the two folders named Albums and BoxSets which are not required to start the application and so can be downloaded post-installation by the system as it sees fit;

This file is then an input to produce the actual AppxContentGroupMap.xml file and I just used the Visual Studio menu to generate it as per the docs; 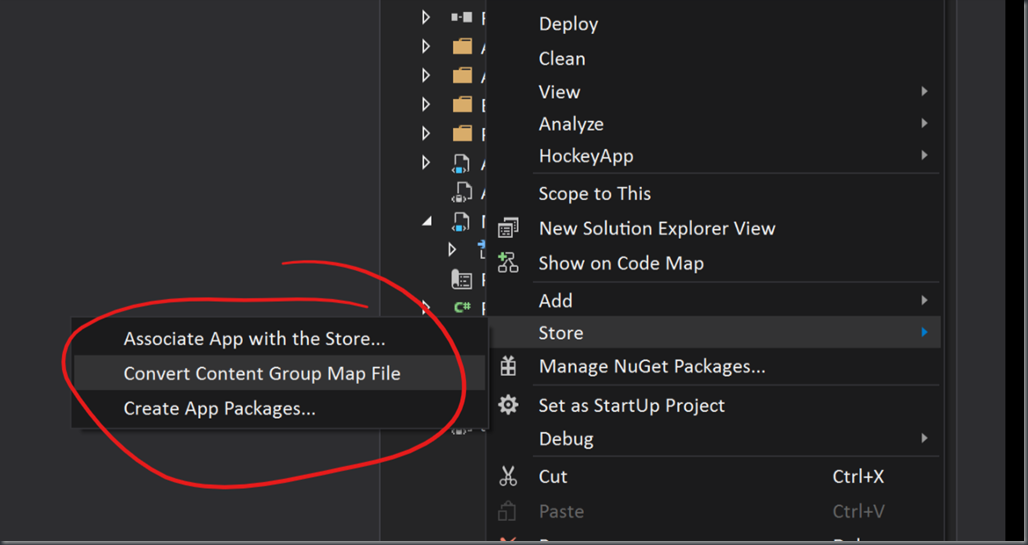 and after a couple of initial gremlins caused by me, that seemed to work out fine.

If the application is going to be installed “in pieces” then my code is going to have to adapt such that it can dynamically load up folders of pictures as they appear post-install.

Because I’d previously written the code to support a similar scenario using app extensions and because the code is very simple it wasn’t particularly difficult to do this. I have a function which attempts to figure out whether the content groups for the Albums and BoxSets have been installed and, if so, it adds them to what the application is displaying. This snippet of code covers it;

and this is making use of APIs that come from either SDK 14393 or 15063 on the PackageCatalog class in order to check what content groups are available and if I find that my Albums/BoxSets groups are available then I have code which goes and adds all the pictures from those folders to the collections which live behind the UI.

How to try this out?

In the //build session, there’s a few options listed around how you can test/debug a streaming install without actually putting your application into the Store. One method makes use of the PackageCatalog APIs to programmatically change the installation status of the content groups, another makes use of the Windows Device Portal (although I’m unsure as to whether this one is implemented yet) and there’s an option around using the regular PowerShell add-appxpackage command.

I thought I’d try the PowerShell option first and so I made a .APPX package for my application via the Store menu in Visual Studio; 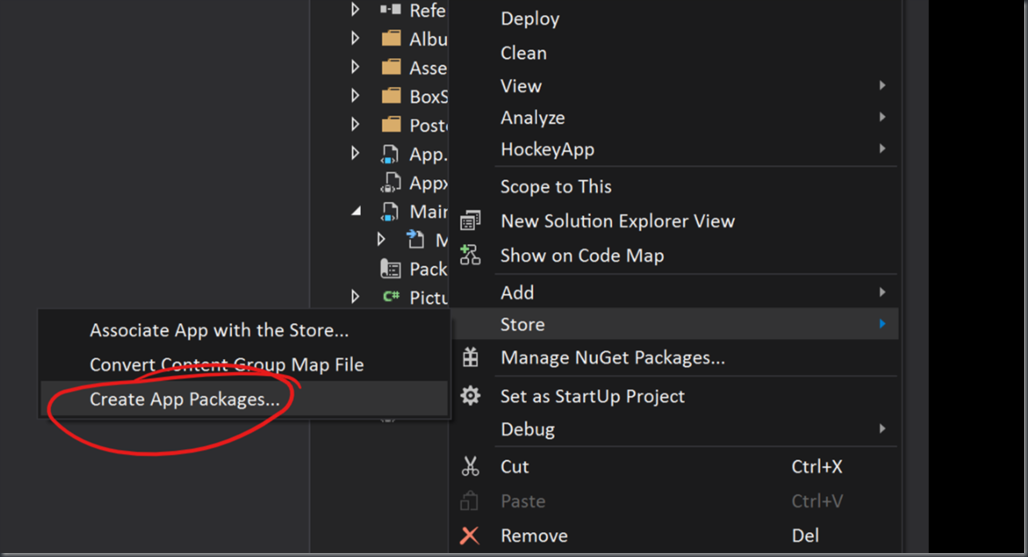 and then made sure that I wasn’t making an APPX bundle; 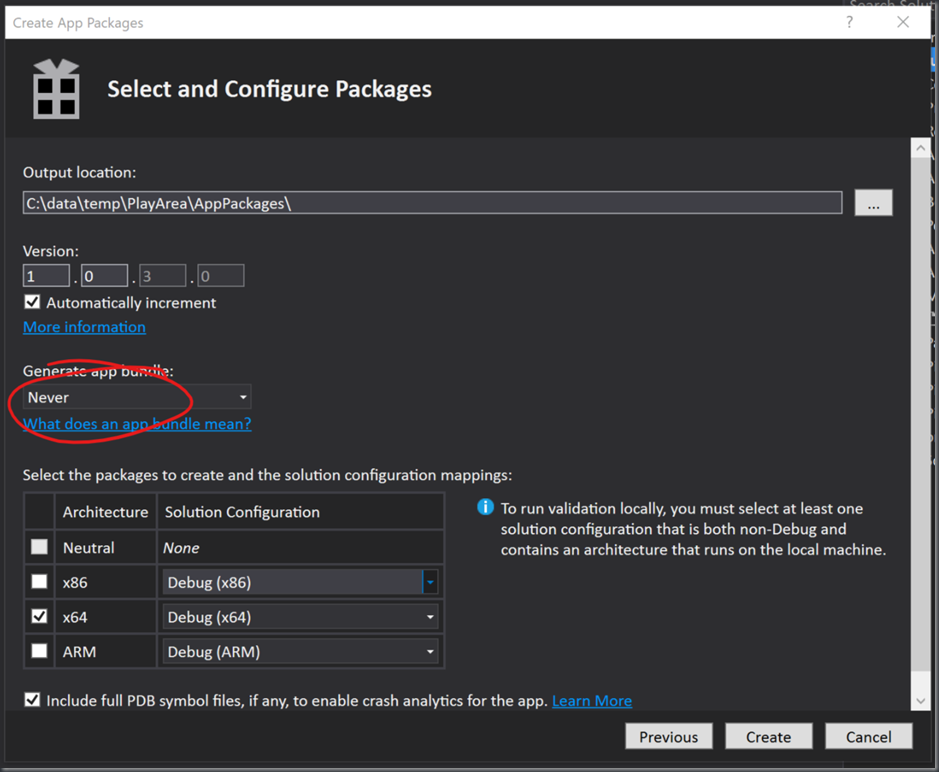 and then I got hold of the temporary certificate that this generates and made it trusted on my system before going to install the .APPX file via PowerShell;

and so the key part here is the new –RequiredContentGroupOnly parameter to the Add-AppxPackage command. With that command executed, I can see that the app only has access to the Posters collection of images from its required content group and so that all seems good; 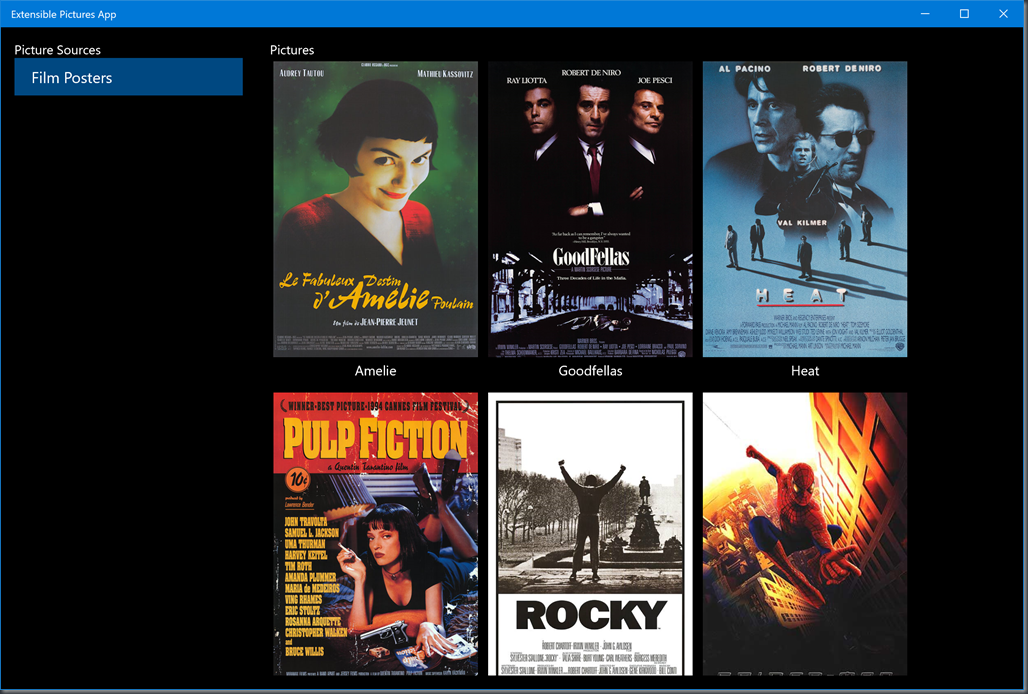 I also found it interesting to go and visit the actual folder on disk where the application is installed and to see what the Albums/BoxSets folders representing the ‘automatic’ content groups look like.

The first thing to say is that those folders do exist and here’s what the content looks like  at this point in the process;

so there are “marker files” present in the folders and so (as advised in the //build session) code would have to be careful not to confuse the presence of the folders/files with the content group’s installation status.

I’d hoped to then be able to use the add-appxpackage command again to add the other two content groups (Albums/BoxSets) while the application was running but when I tried to execute that, I saw;

Now, this was “very interesting”

in that I was reading the section of this page titled “Sideloaded Stream-able App” and it suggested that;

With the debugger attached, you can install the automatic content groups by:

Which is the exact same command but without the flag (what happens is that the platform will see that the app is already installed and will only stage the files that are missing).

So I attached my debugger to the running app and ran the command again and, sure enough, I could see that the debugger hit a first-chance exception in that piece of untested code that I’d listed earlier;

and so, sure enough, my code was being called here as the package started to install but that code wasn’t working because it was confusing the content group name with the application’s full package name.

That didn’t surprise me too much, it had been a bit of a ‘wild guess’ that I might use the PackageCatalog.PackageInstalling event in this way and I was clearly wrong so I went and reworked that code to make use of the far more sensible sounding PackageContentGroupStaging event as below;

This looked like it was far more likely to work but what I found was;

This means that I haven’t been able to use this method just yet to test what happens when the app is running and the additional content groups are installed.

and so that shows that things are working across app executions but it doesn’t test out how they work when the application is up and running which might well be the case if the user gets the app from Store, runs it and then additional packages show up over the first few minutes of the user’s session with the app.

At this point, I went back to this blog post and tried out the steps under the heading of “Using the Streaming Install Debugging App”. This involves going off to download this app from github which then uses the APIs to manipulate the installation status of the content groups within my app.

I uninstalled my app from the system and then reinstalled it by hitting F5 in Visual Studio and then I ran up the debugging app and, sure enough, it showed me the details of my app; 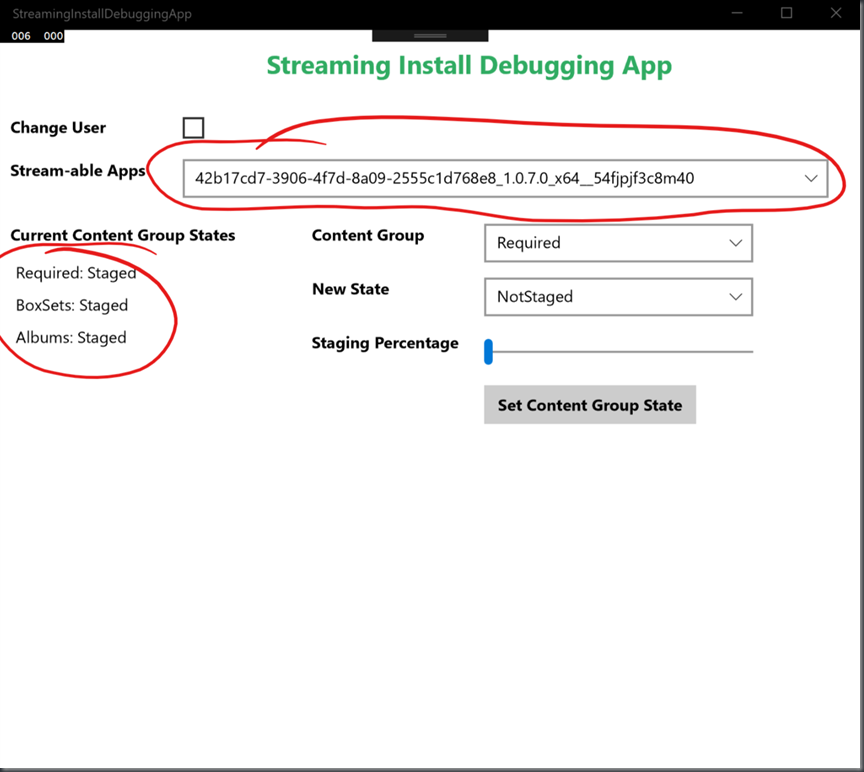 and so I can now use this UI to change the status of my two content groups BoxSets and Albums to be ‘not staged’; 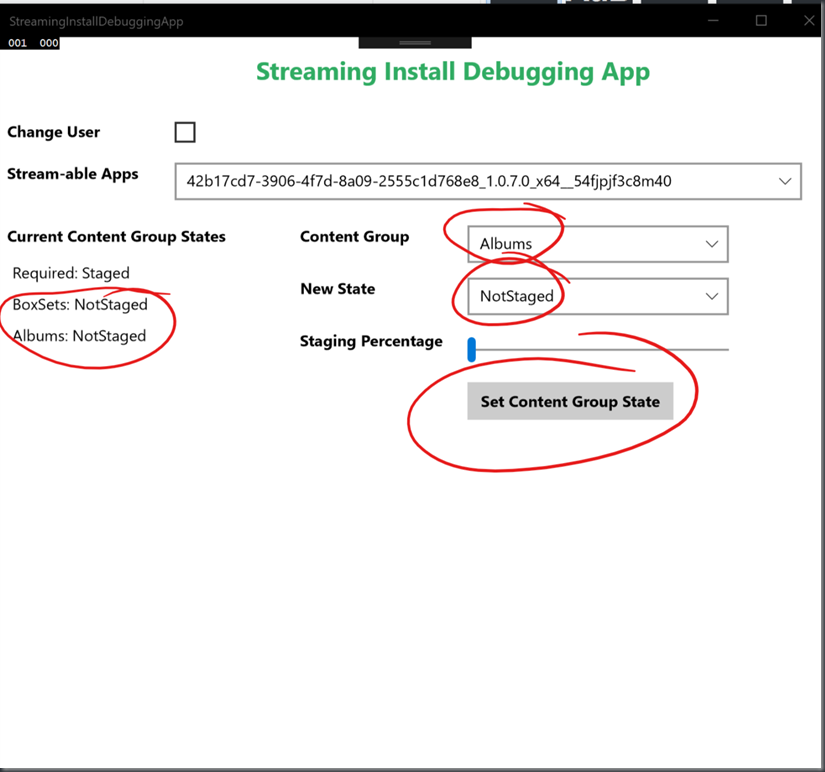 and then run up my app alongside this one and it correctly just shows the ‘Film Posters’ content; 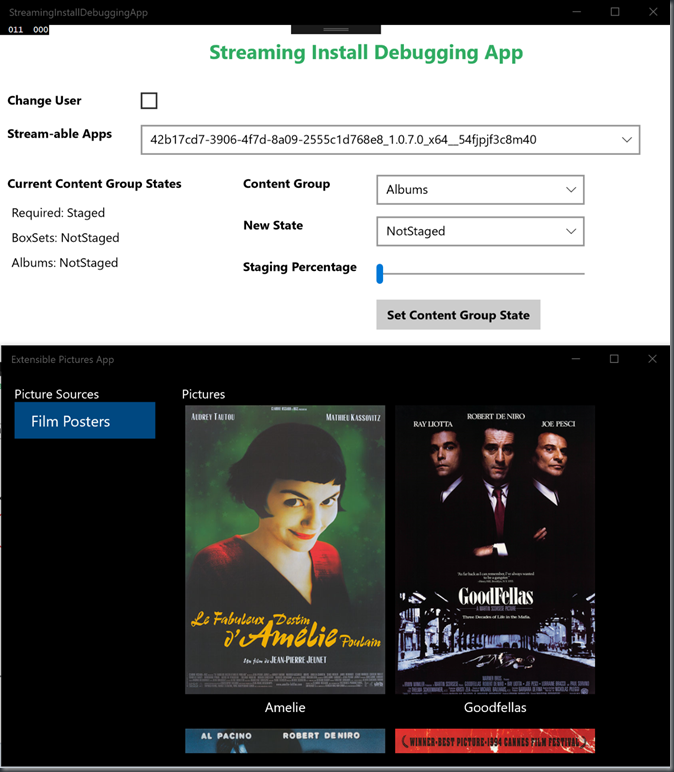 and if I dynamically now switch a content group’s state to Staged then my app updates; 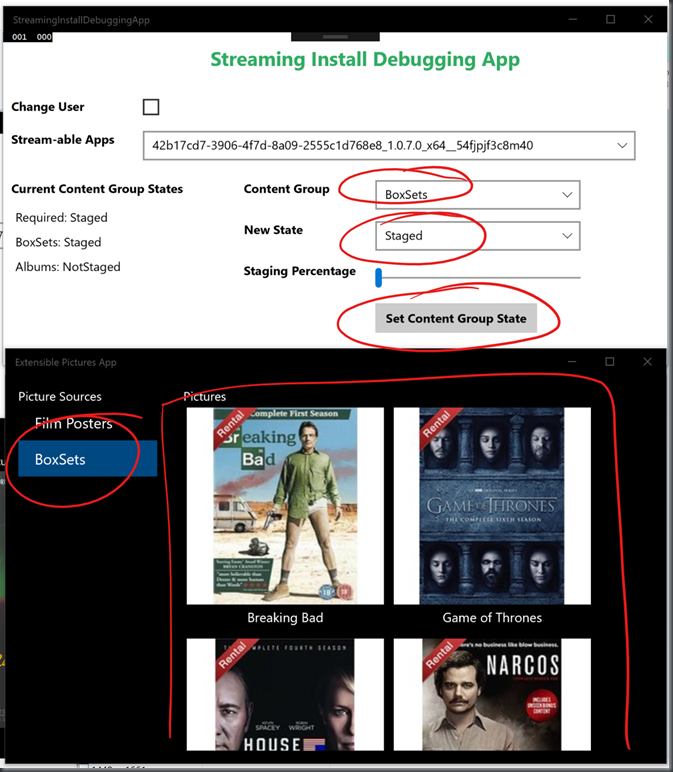 and I can repeat that process with the Albums content group; 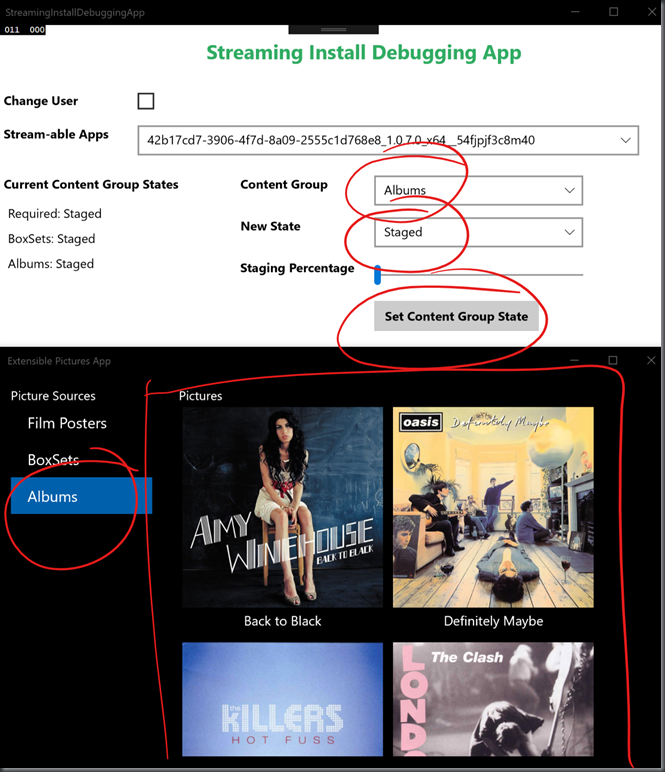 and so that all seems to be working nicely

I really like these new sorts of capabilities coming to UWP packaging and the APIs here seem to make it pretty easy to work with although, clearly, you’d need to give quite a lot of early-stage thought to which pieces of your application’s content should be packaged into which content groups.

I put the code that I was playing with here onto github if you’re interested in picking up this (admittedly very simple) sample.