In my previous post, I made some steps forward in terms of enabling a basic shared holographic experience using the Sharing Service from the HoloToolkit-Unity such that;

I wanted to take this further and try to come up with a solution that enabled a little more functionality when devices are physically co-located in a space but also to try and lay the ground for devices which are located elsewhere accepting that this might introduce latency issues.

What I wanted to enable runs something like this;

As another stretch goal, I’d also like this to work for users who are in a remote location but I’m probably not going to get to that in this blog post.

I wanted to try and make use of the ‘rooms’ facility of the Sharing Service within the HoloToolkit-Unity to see if can ultimately support the idea of multiple rooms which might be local/remote to implement something along the lines of;

That sounds achievable so I wanted to give it a try and I thought I’d write up the steps here…although I’m setting off on this journey without knowing whether the remote rooms part of this is achievable or not and I suspect it will come down to finding out whether messages can be broadcast across rooms by the sharing service.

Here’s the steps that I ran through here;

I made a new Unity project much like I do in this video and imported the HoloToolkit-Unity;

and I made sure that the project had the capabilities to use the microphone, internet client, private networks and spatial perception and I imported these pieces of the HoloToolkit; 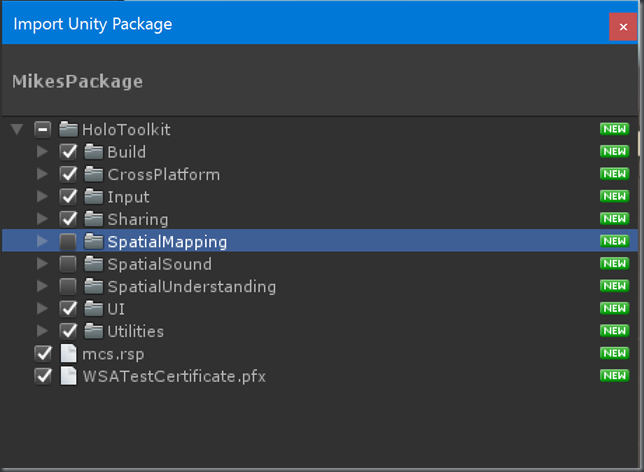 Note that I don’t anticipate using the Spatial Mapping functionality here as I’m not intending to have my model collide with the real world but I do need the spatial perception capability in order for world-anchor functionality to work.

However, there is a dependency in the script WorldAnchorManager.cs on the SpatialMapping component although it doesn’t seem like a huge dependency that will impact me so I could either;

and then my project will build.

I didn’t want to spend a long time on making a model and so I made simple model which is just four cubes positioned at ‘cardinal’ points 1m away from each other and initially centred in front of the user at a distance of 3m;

I also added a box collider to that model such that I can treat it as a single object in terms of hit testing and so on and, as you can see, I parented this model off an empty object named ModelParent.

I want the user to be able to manipulate the model somewhat and so I’m adding a little bit of control. Note that I am not using the regular Tap To Place script because it has a dependency on Spatial Mapping so that it can collide models with the physical environment which isn’t a concern for me here.

I added a few extra pieces to what I already have, specifically this ‘SharedObjects’ holder which holds an Audio Source, Cursor, Input Manager and Text to Speech Manager;

and I reparented my Model into a new, empty parent named ModelParent and I added a Keyword Manager to handle a single “lock” keyword; 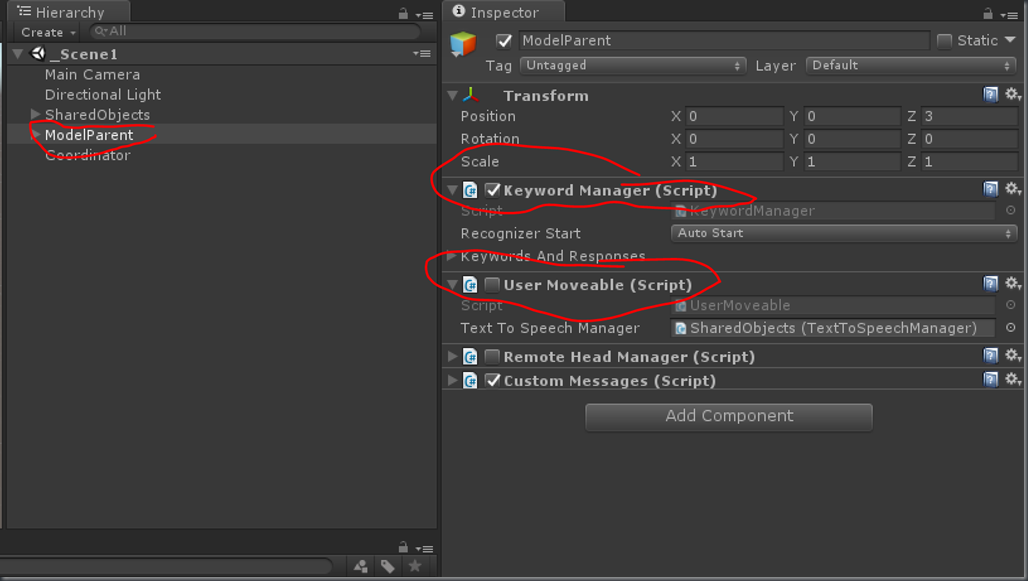 and then married this up with a script to handle the basic interactions that I want here;

and this now gives me a model which I can move around via air-trap and drag and then, once done, I can say ‘lock’ and the script disables itself, fires an event and is done.

It’s worth noting that this User Moveable behavior is disabled when the app starts up and is turned on by a later script if it is needed.

Even at the most basic level, it’s important to be able to see some kind of status display and so I added a Text Mesh to display some text; 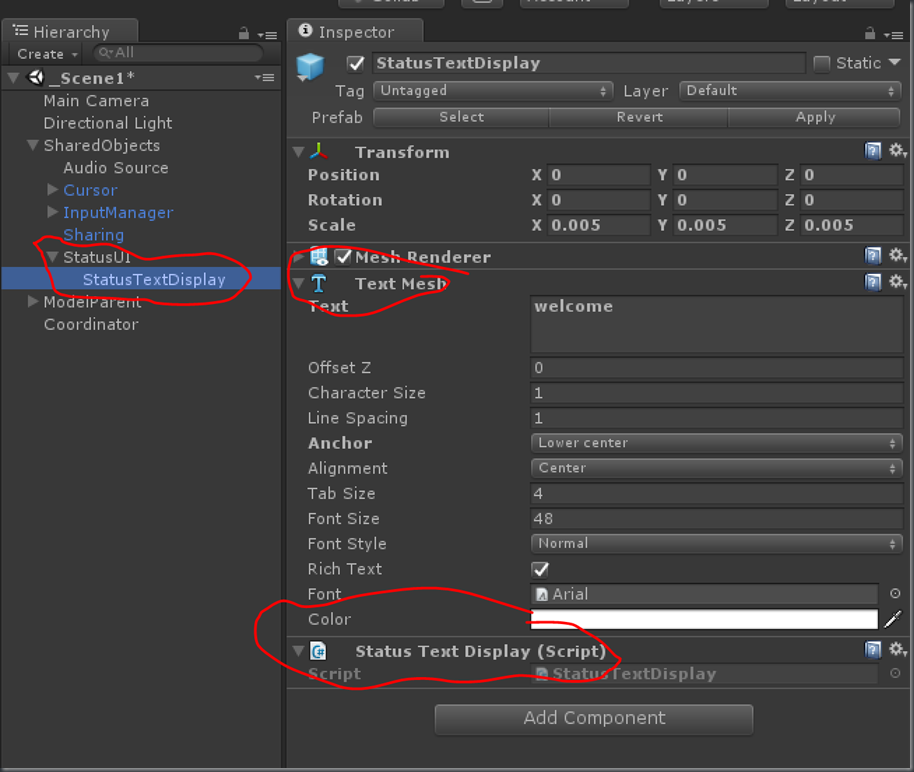 and a script to allow the text to be set/cleared from anywhere in my code;

and I parented it from an object that would position it and give it a basic tag along and billboarding behaviour (taken straight from the toolkit) and positioned it such that it is 2m in front of the camera; 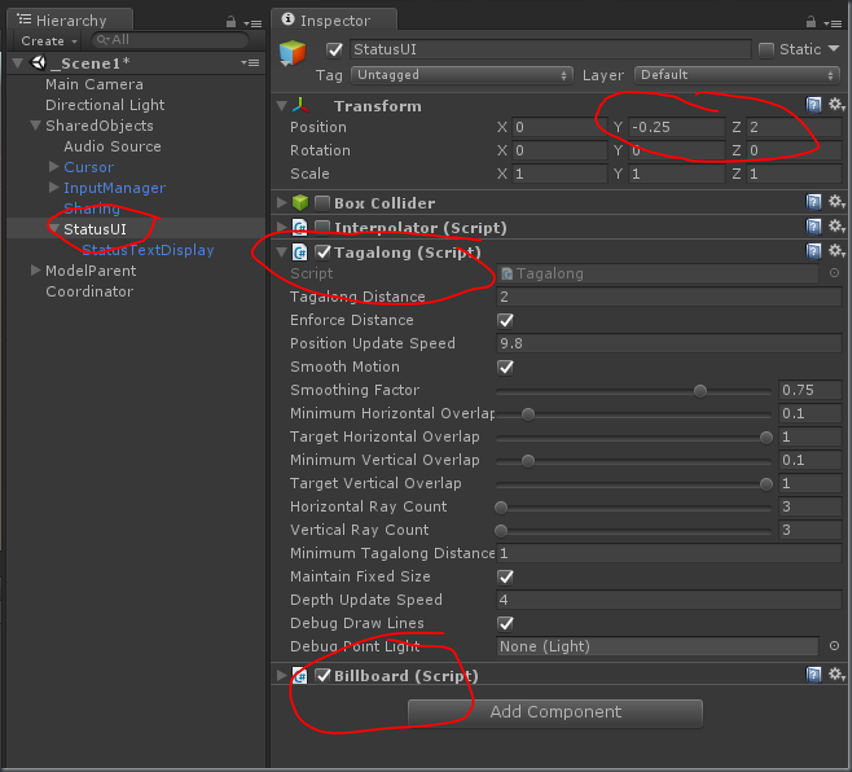 Step 4 – Connecting to the Sharing Service 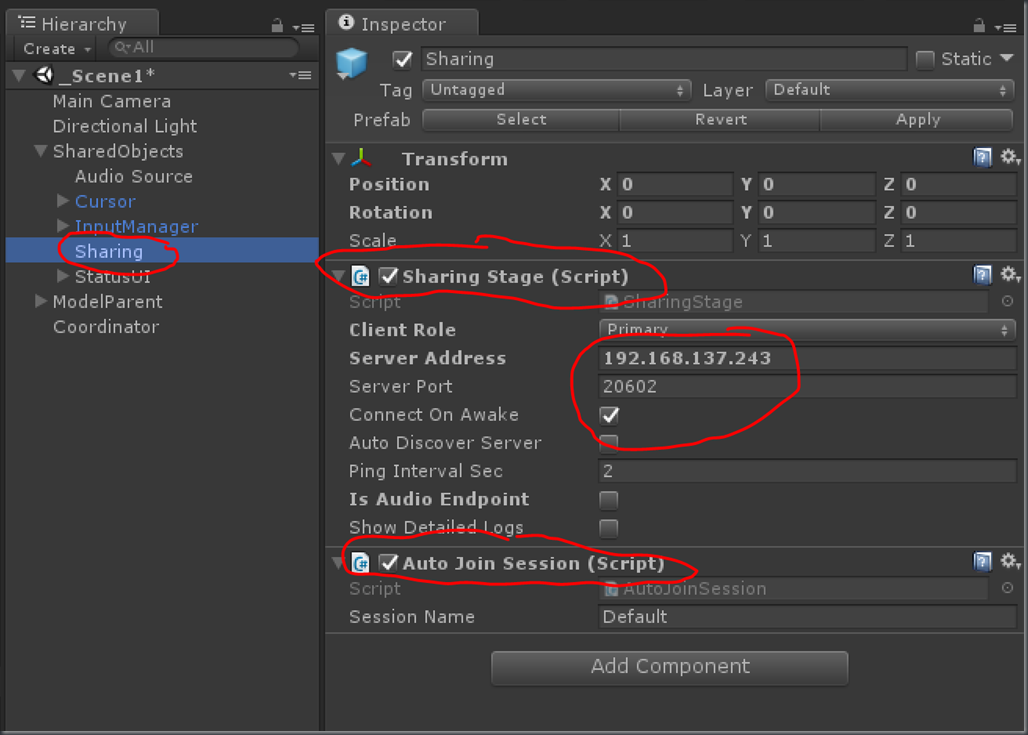 I added a script called Coordinator and had it check for when the sharing stage was connected via its Update routine;

although, equally, I could have used the Connected event that this component also offers and so now I can add logic for when the sharing service is first connected.

Note that the script has access to the parent of the model so it can enable/disable it at the appropriate point in the logic.

I expanded out that Coordinator script such that it contains a state machine that runs something like this;

A note on (2) above. I found that if I simply get hold of the RoomManager and call GetRoomCount() then it can give me a 0 result even when I know that there is a room on the sharing service. However, I’ve found that on the next frame that result changes and so I’ve added a little bit of code here which can call GetRoomCount() for up to N seconds to see if the answer it is giving me back is consistent.

I took the Import Export Anchor Manager script from the HoloToolkit and split it out into two scripts with one for export and one for import.

I mostly rewrote the code that I found in that script along the way and I certainly lost some of the robustness of the original script in doing so (in favour of simplicity) and I also took out some of the functionality (e.g. saving/loading anchors from the local anchor store rather than always hitting the network). Additionally, the scripts I ended up with assume that connection to the Sharing Service is already made and that the Room Manager has been used to set up a current room.

As part of this, I made this little base class and interface;

and the ImportAnchorManager is as below;

and so at this point, I should have an app that can run on multiple devices and (in a basic way).

The app will connect to the sharing service, create or join a room based on the WiFi name and will then allow a user creating a room to position the model where they want it and it will then progress through importing/exporting world anchors such that each user will see the model positioned in the same place in the real world.

I made a video of this operating in a “single user” mode below which doesn’t quite convey what it’s doing but it’s the best I could work out with a single HoloLens device;

There’s already a script in the HoloToolkit-Unity which sends custom messages through the sharing service so that each device in a shared session can visualise the position of the other devices.

I used this script in my previous post, it’s called Remote Head Manager and it relies on another Custom Messages script so I added both of these to my modelParent object; 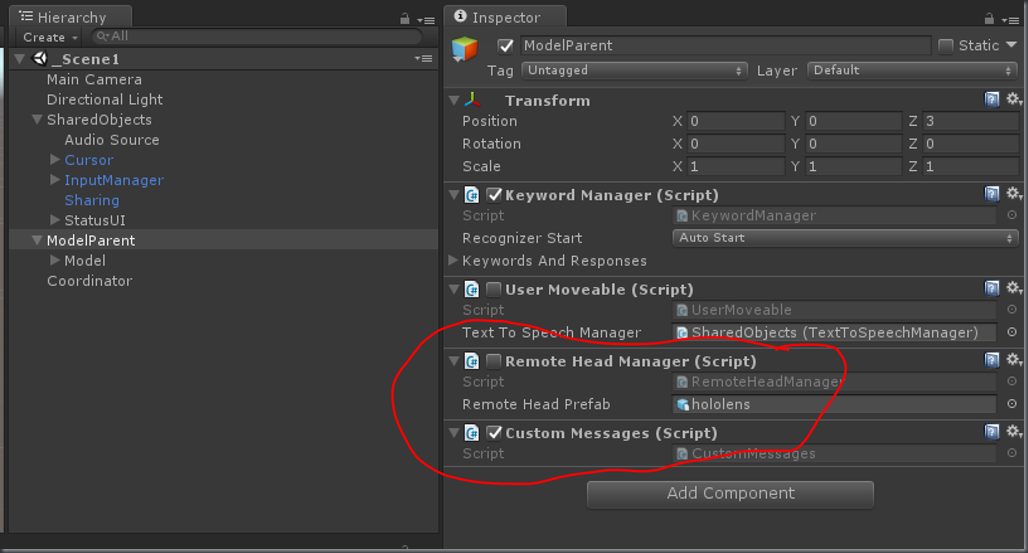 That Remote Head Manager test script from the toolkit draws a cube for the head position and it doesn’t draw the remote user’s gaze and so I modified the script to make the prefab that it draws configurable and so that it draws remote user’s gaze with a line. My modified version of the script is as below with MIKET_CHANGE wrapped around the places where I have done something to the original script;

and the prefab in question here is a small model of a HoloLens; 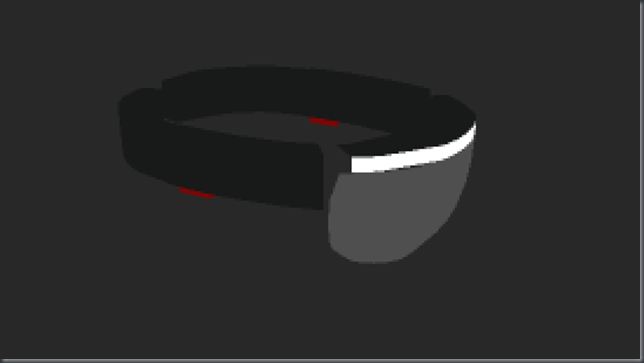 which will show up with a ‘ray’ emanating from it at the position where each of the HoloLens devices are present in the scene.

Wrapping Up & Next Steps

This post has got long and so I’ll break off and will follow-up in another post if I can get an extension of this code working with users who are not in the same physical rooms and so need a remote experience enabling.

As a teaser, here’s an early experiment of trying that with my colleague Pete connecting to a cloud-based server where Pete is remotely viewing this model located in my home office and I can remotely see what Pete is viewing; 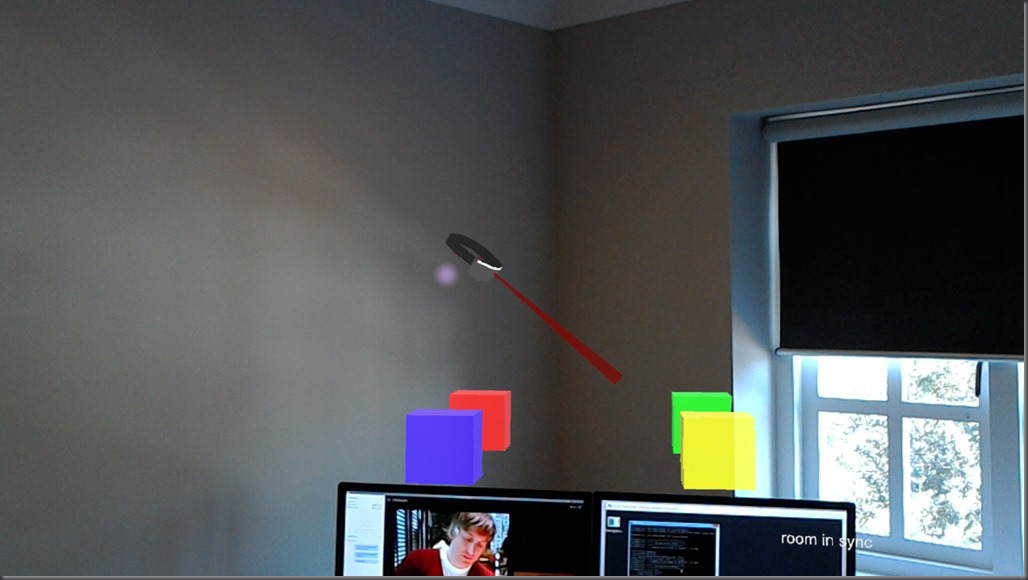 and so the initial experiment is looking pretty good