I wanted to see if I could do some type of ‘custom’ object recognition using HoloLens and Vuforia starting from scratch rather than starting from the pre-baked Vuforia sample and following the steps outlined here;

I have this scenario in my head where I could combine HoloLens and Sphero as I did in this post;

That’s where I’m trying to head but I’m not yet sure whether Vuforia can recognise spheres for me so, in the meantime, I should perhaps just focus on seeing whether I can get a custom use of Vuforia to work – it’s always best to ‘start small’ and work towards the final goal

Picking an Object to Recognise

First off, I needed to decided which object I wanted to recognise in my scene and so I went to the kitchen and found this box of biscuits (it’s Xmas!) which are very nice by the way; 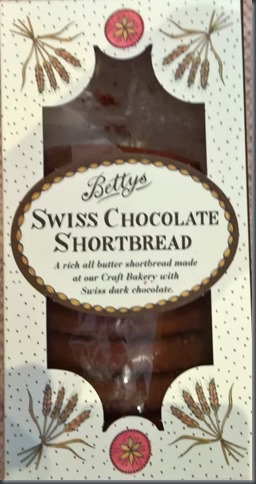 and so I thought I’d see if I could get Vuforia to identify that box of biscuits for me.

My first step here was to go to Vuforia’s license manager page and make sure that I’d created an app;

which I’d done for my previous post and I then went to the ‘Target Manager’ tab and created a target database;

and you’re then presented with a choice of whether you are trying to do [device/cloud/VuMark] recognition and so I chose device and then once I’ve got a database, I can add targets to it which are [image/cube/cylinder/object] and so I chose cuboid and provided some details of my biscuits; 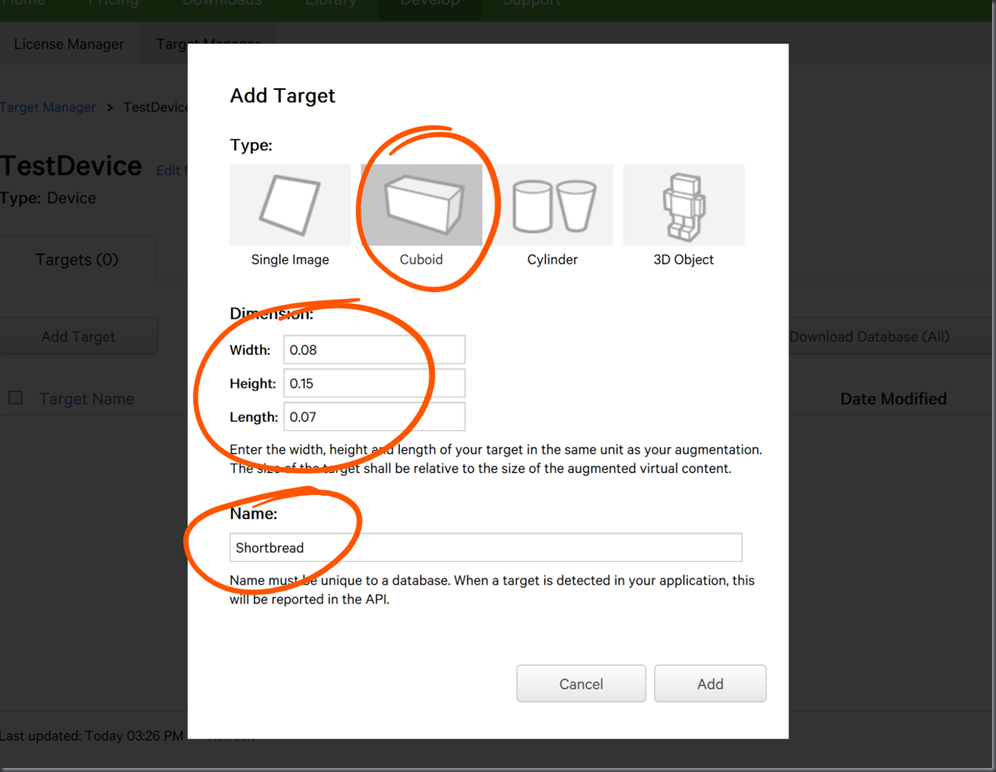 What I really wasn’t sure of here was what dimensions I was supposed to be using and whether they needed to relate to the real-world size of the box. I read one or two forum posts (like this one) but it still didn’t really leave me with clarity around what I was meant to do in terms of units and my box is 8cm (wide) by 7cm (deep) by 15cm tall but I wasn’t confident that I was telling the Target Manager this correctly.

Having done this part, my biscuit box details are flagged as ‘incomplete’;

and so I went and provided more details and then I got a bit bogged down because the uploader seemed to want images that matched the aspect ratios that I had given it – e.g. 8/15 = 0.533 whereas my image was 1417/2701 = 0.524 and so I resized the images a little to try and come closer to the right aspect ratio and the tool ultimately backed down and let me win 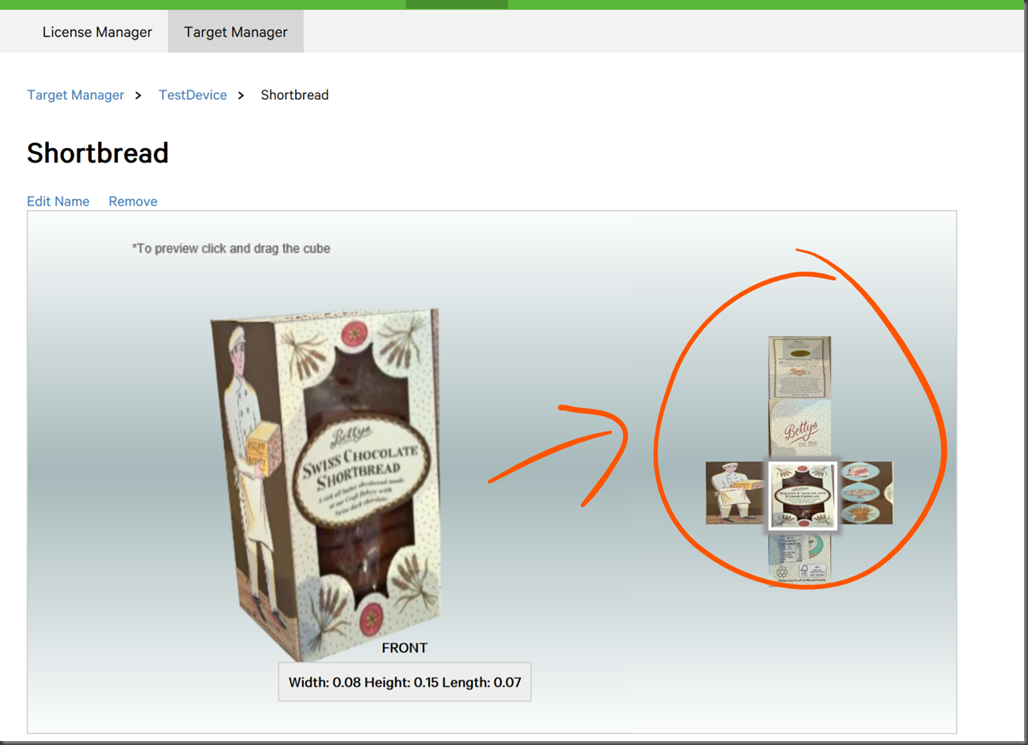 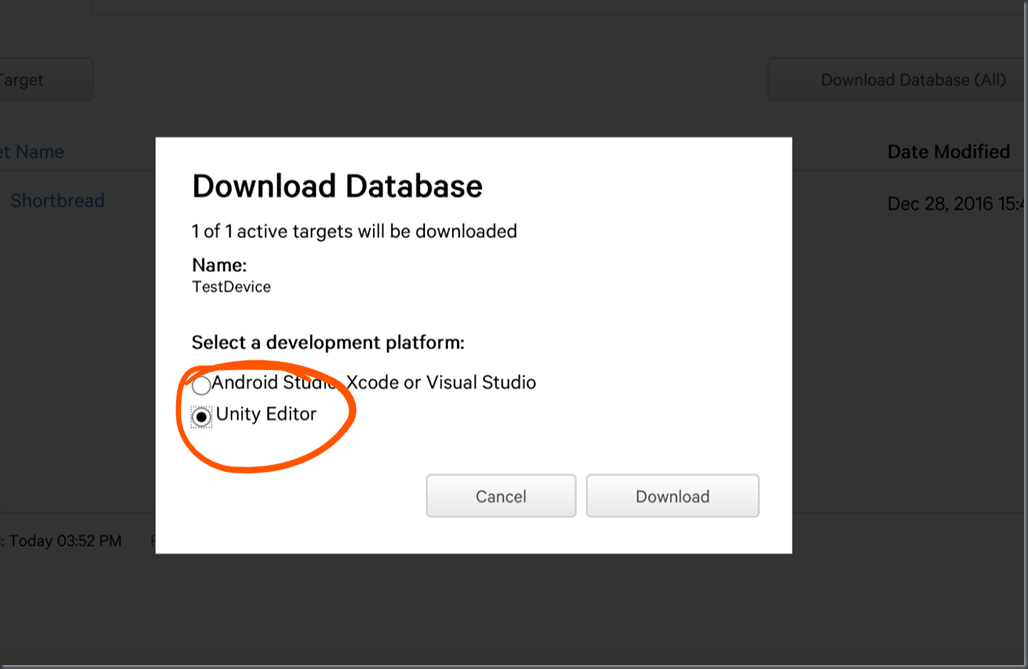 and the download here gave me a Unity package (called TestDevice) and so it’s time to perhaps move across to Unity and see if I can do something with it.

I need to admit at this point that I went around a ‘loop or two’ coming up with the walkthrough below – it maybe took me 4-6 hours as I was finding that my projects weren’t working and some of that was due to me being new at using Vuforia and some of it was just one of those classic situations where you have one lump of code that works and another lump of code that doesn’t and you’re trying to figure out the delta between the two.

Ultimately, the set of following (seemingly simple!) steps are what dropped out of my experimenting…

I made a blank HoloLens project in Unity 5.5 and then imported 3 different unity packages as below;

I also made sure that I had switched on the UWP capabilities to allow internet connection, spatial perception and webcam although at the time of writing I’m unsure whether I need them all.

I also made sure that Virtual Reality supported was switched on (as usual); 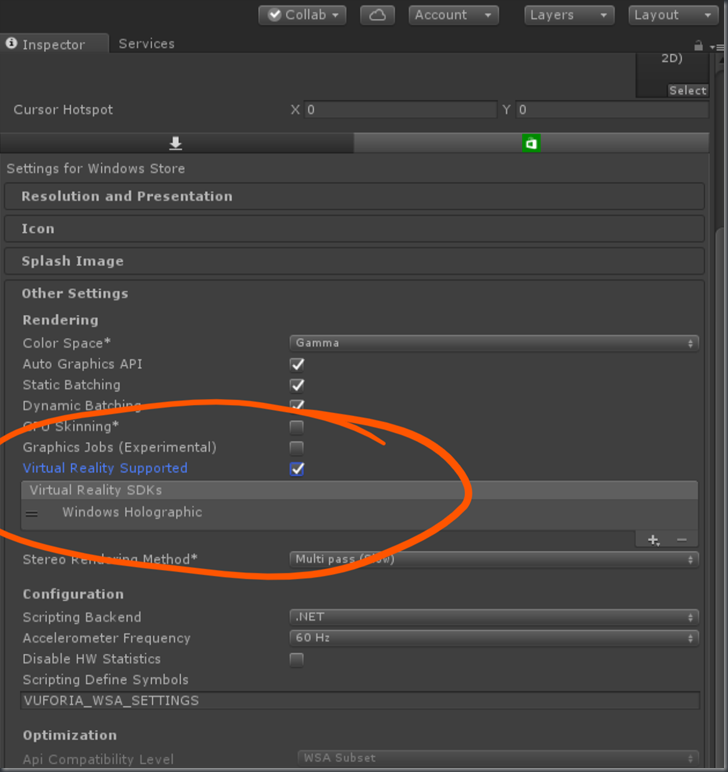 Setting up the Vuforia Configuration

I then went and used the (added) Vuforia menu in Unity to open up the configuration and I changed the highlighted options below; 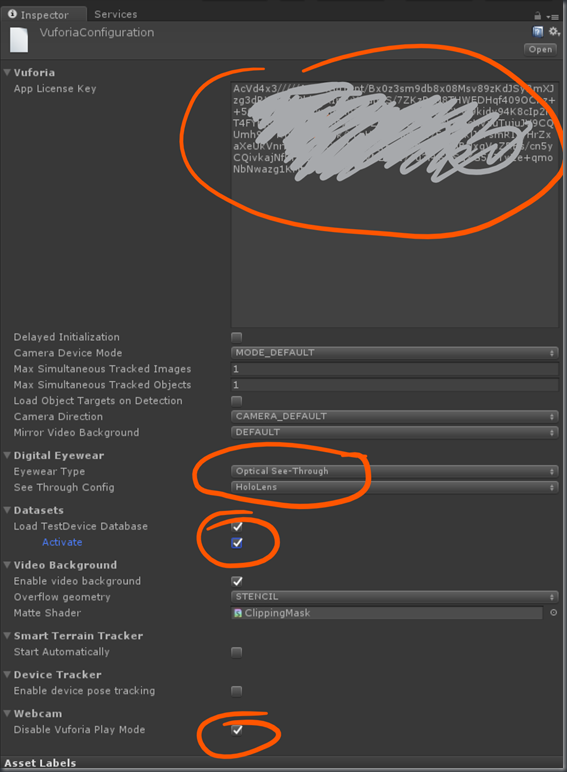 Setting up the Vuforia Camera

I then dragged out the Vuforia prefab ARCamera to my scene and made sure that I’d set it up as recommended by altering the highlighted options below;

and so that tells the Vuforia camera about the HoloLens camera.

Setting up a Multi Target Behavior

At this point I got a little stuck

The essence of this was really a ‘category error’ on my part and it was because I thought that I was doing ‘object recognition’ and so I kept adding an ‘Object Target Behavior’ script and attempting to point it at my database and the editor didn’t like me trying to do it; 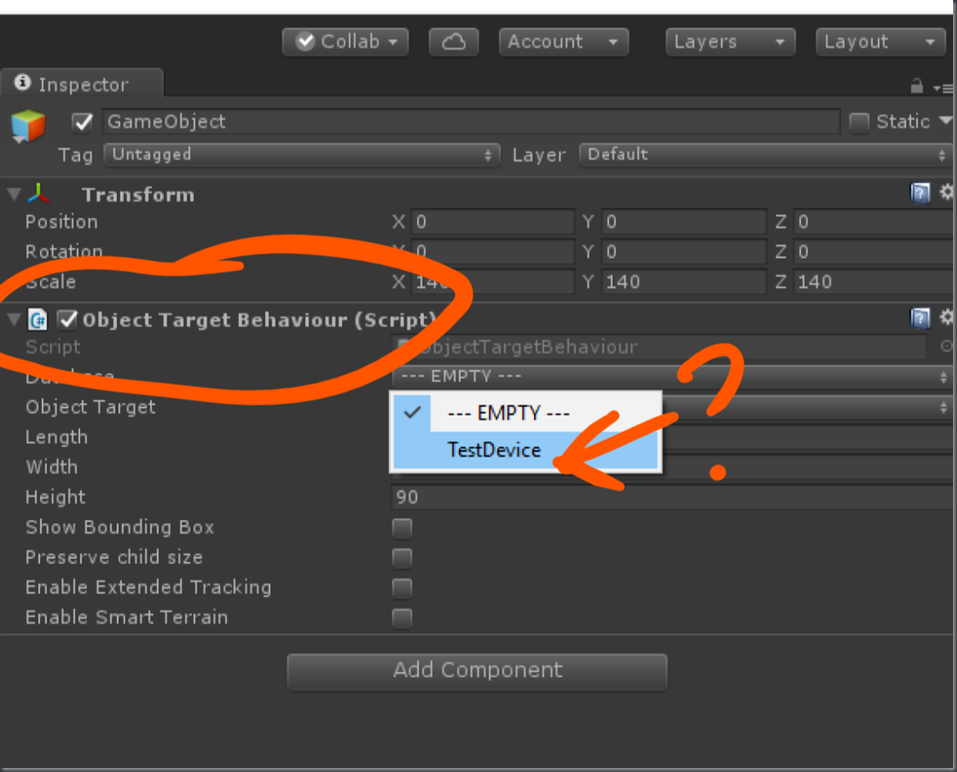 I dragged out a ‘Multi Target’ prefab onto my scene; 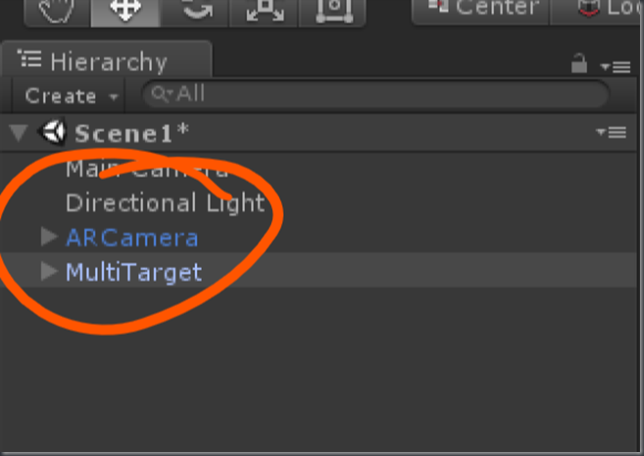 and configured it to use my database and my object and switched on the extended tracking; 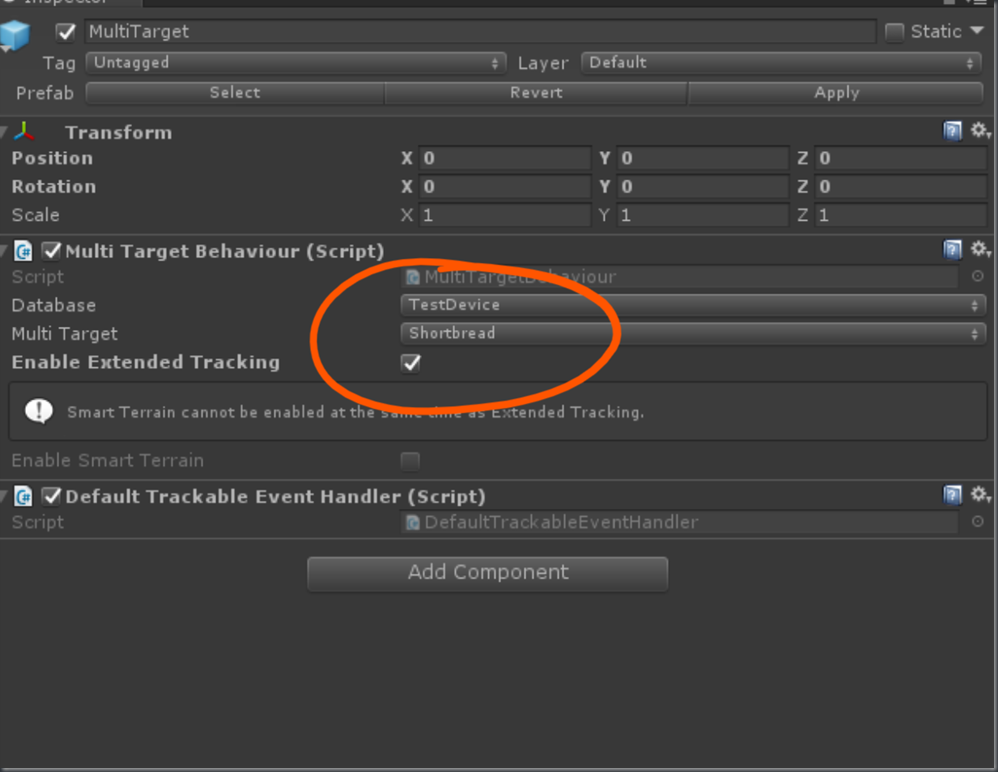 Comparing with the Vuforia Unity Sample

I didn’t get everything working ‘first time’

and so I had reason to compare what I was doing here with the original Vuforia sample that I looked at in my previous blogpost and I noticed that the Vuforia camera had a script on it; 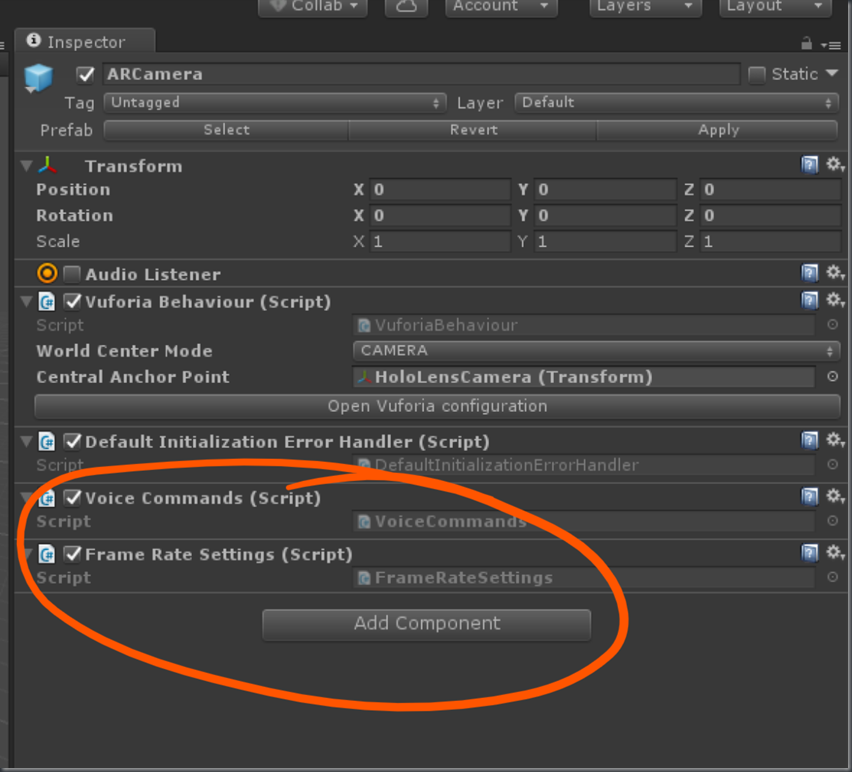 With that setup I deployed to the device and watched the debug output in Visual Studio to see if I was able to track my Shortbread target.

Note – at this point, I’d actually been around this loop around 4-5 times as I’d messed things up a few times and tried out various different routes before settling on the set of steps that I’ve written up here which new feel fairly simple and obvious compared to some of the things that I somewhat randomly tried to get this ‘hello world’ up and running

And, sure enough, I spotted the debug spew that seemed to show that Vuforia was spotting my box of shortbread; 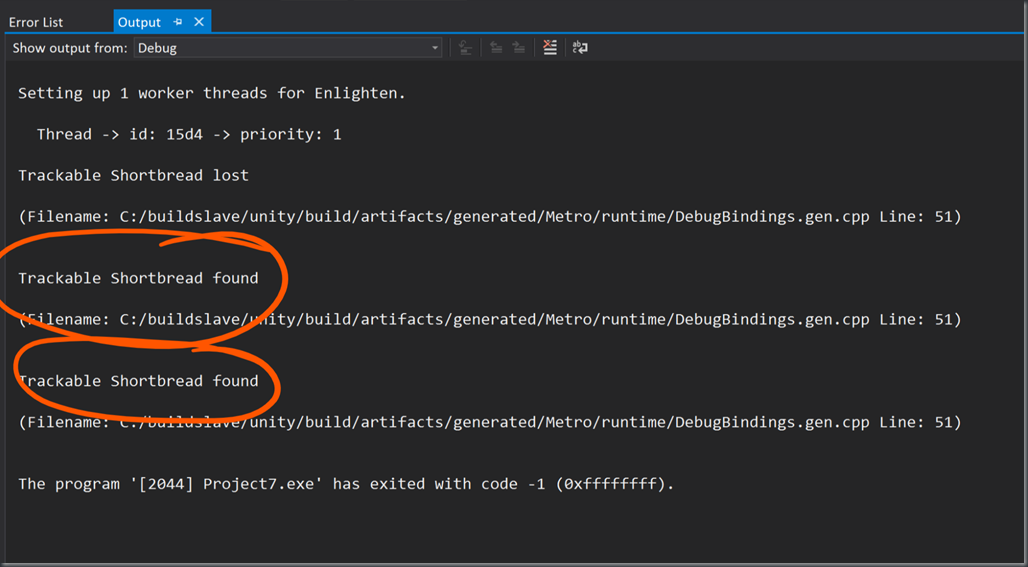 This comes from Default Trackable Event Handler script that comes as part of the MultiTarget prefab; 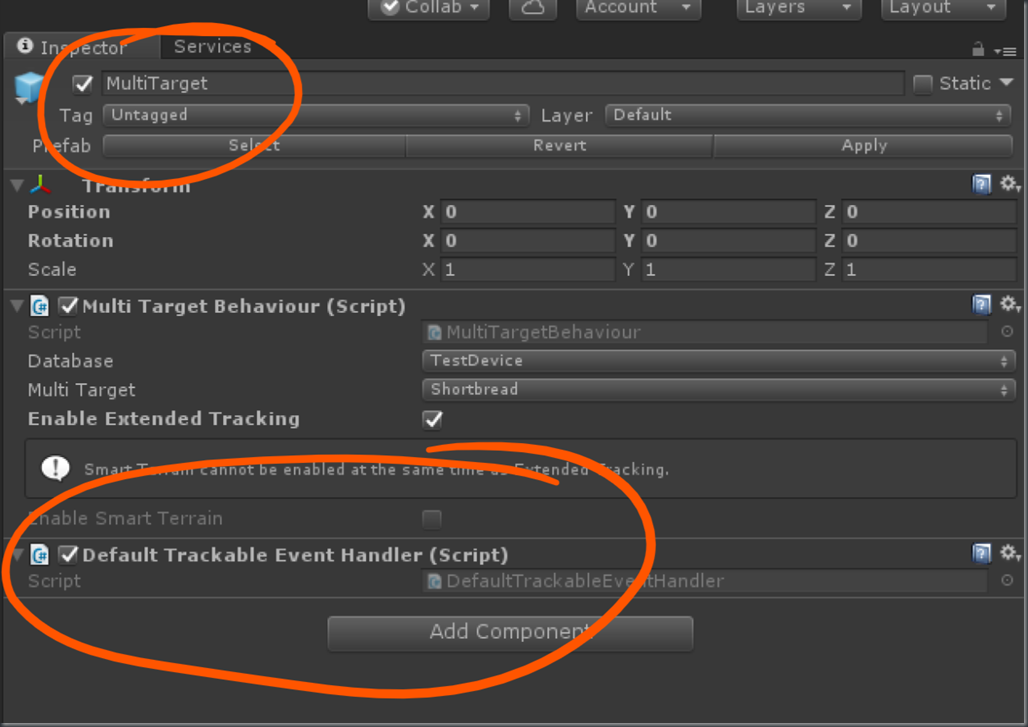 which picks up the TrackableBehavior component and has some default event handlers which swich on/off any child renderers and colliders as the object is tracked/lost and it seemed to make sense to use those to add something into the scene to visualise what Vuforia was tracking.

I went back into Unity and added a simple cube to surround the Shortbread box making it slightly larger than the biscuit box that it is meant to surround; 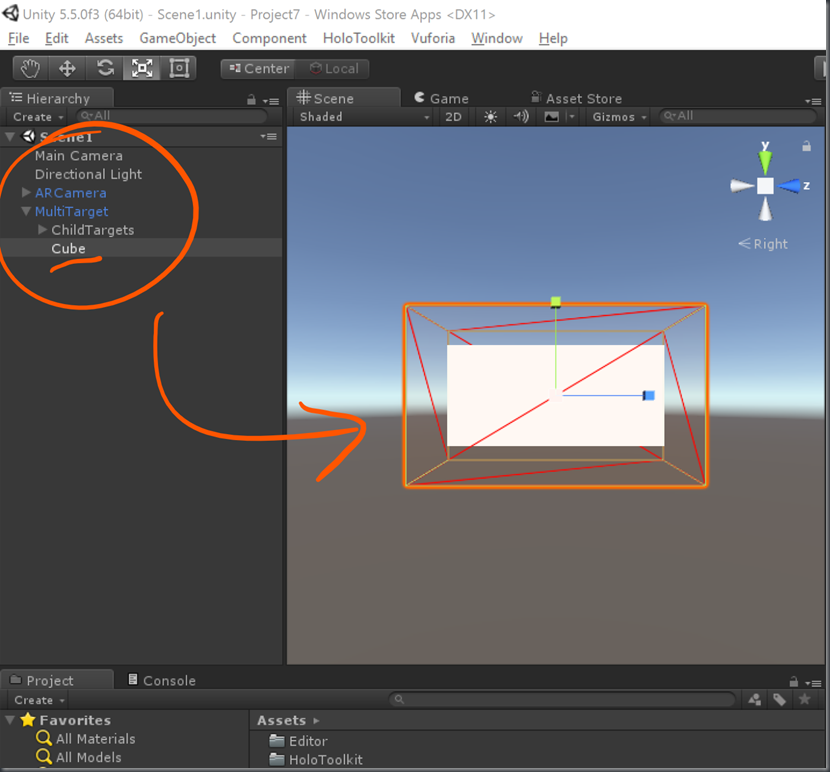 and I went and borrowed a wireframe shader from the UCLA Game Lab;

and used that to shade my cube;

and then tried that out on HoloLens, capturing the output below where you can see that the biscuit box is picked up pretty well;

so, in the end, getting that basic scenario up and running wasn’t too difficult at all. I’d like to try something ‘more imaginative’ as a follow on but that’ll have to be in another post…

1 thought on “HoloLens, Unity and Recognition with Vuforia (Part 2)”