It’s just before Xmas and I thought I’d have a bit of fun in trying to take the ideas around world anchors that I started to play with here;

and I found this one in the Unity Asset Store going free and so I borrowed him; 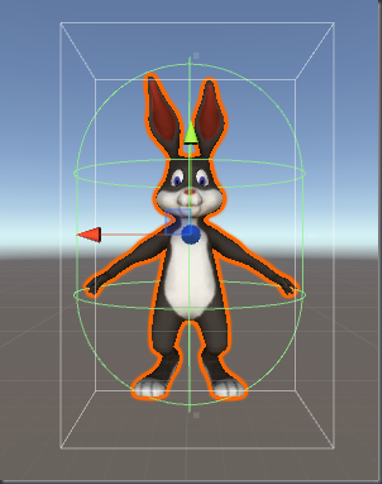 and tried to introduce him to the idea of teleporting between platforms that are anchored into real-world space; 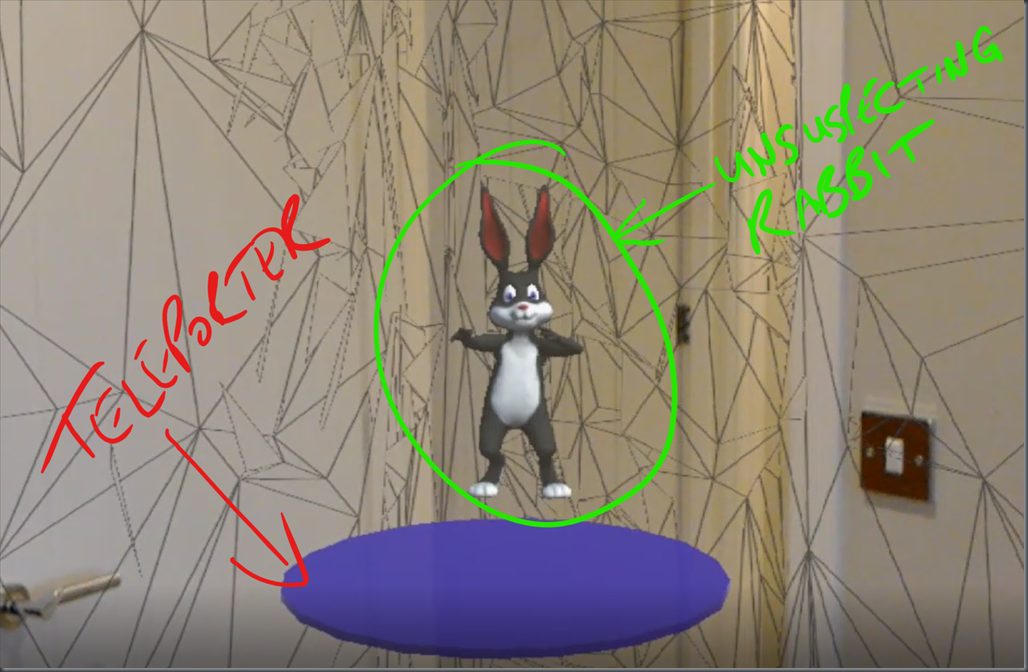 I was keen to see if I could put those platforms in different rooms in the real world to see how that works.

I feel like there’s something quite ‘magical’ about taking a hologram in one room and doing something to it such that it appears in another room that I can’t currently see (maybe it’s obscured by a wall, floor, ceiling). An extra bit of magic might be to have multiple users sharing the same rooms and holograms so that two users in separate rooms could send holograms back and forth between them and there’s support in the HoloToolkit for doing that type of sharing (see the ‘Holograms 240’ tutorial here).

Below is a quick recording of the simple demo that I came up with – note that;

How does that look from a Unity/code perspective?

Code Behind the Video

My Unity scene is very simple in that I have installed the HoloToolkit and configured my project, scene and capabilities for Holographic development (including making sure that my app has the capability for ‘Spatial Perception’).

My scene then has 4 things in it; 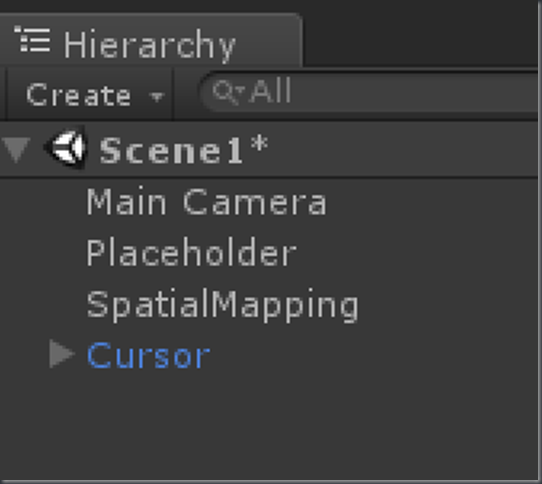 The camera is just the default camera and the Cursor is the cursor prefab taken from the HoloToolkit as I did in this video and with no modifications made to it.

When it comes to SpatialMapping, I started with the prefab from the toolkit as in this video but then I did some reading about caching and settings and multiple rooms and I found all of these forum posts really useful;

and that last article is so good that I’ll reference it twice;

but for my scenario I went with what seemed like a fairly simple set-up in that I took the Spatial Mapping prefab; 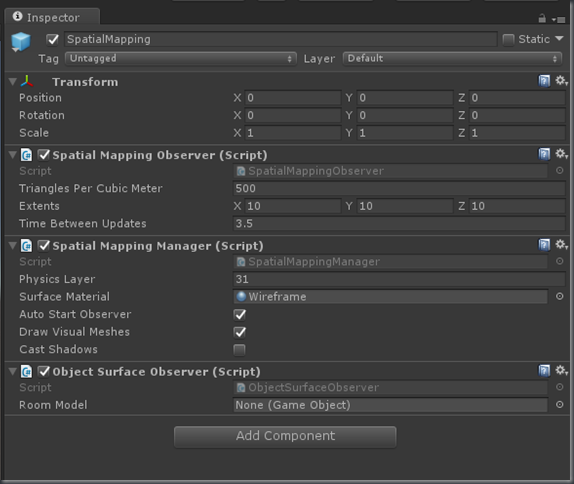 and I took away the ‘Object Surface Observer’ as it didn’t seem to have a runtime role to play and I then tweaked some parameters down to try and end up with a situation where I was asking for a less complex mesh than the prefab’s setting of 500 triangles per square metre (mine is set to 50) and trying to update it more frequently (1 second versus 3.5 seconds); 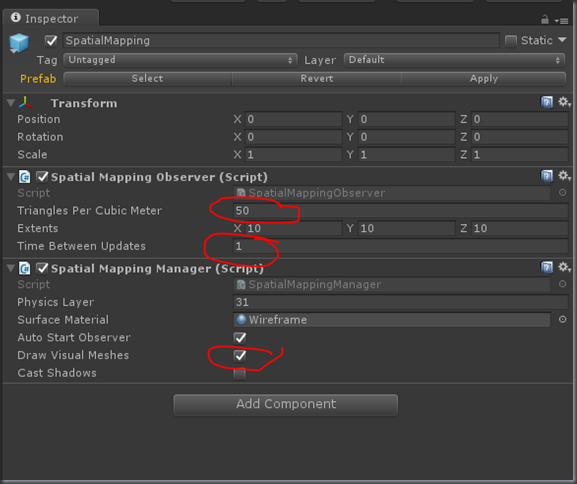 Prefabs to Instantiate at Runtime

I made a prefab out of my ‘teleporter’ disk so as to make it an empty game object which contains a box collider and a cylinder and it uses the Hand Draggable script in order that the user can drag it around trying to make sure that it does not turn to face the user but, instead, stays upright;

The intention of the empty game object is to provide a parent object that can be used to reparent the rabbit as it teleports to this particular disk and that seemed to work out reasonably well.

The rabbit works in a very similar way in that it is also a pre-fab and I have attached both a capsule collider and the Hand Draggable script to it as well except this time around I allow it to orientate itself towards the user; 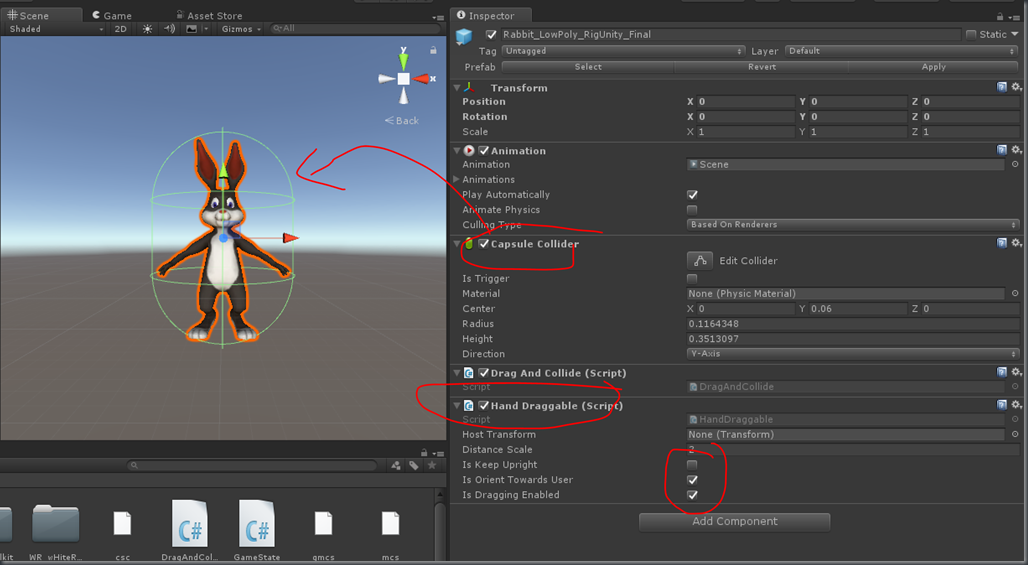 and both of these prefabs also have a script on them called Drag and Collide which really came from my previous blog post where I’d done something very similar with a Xmas present. That script looks like this;

That script is really trying to achieve a few things;

This script depends on a script called GameState and you might notice that I’m using what I think of as quite a ‘clunky’ mechanism to try and differentiate in this script between rabbits and transporters using a method GameState.Instance.IsTransporter and this somewhat reflects my collision with Unity and its approach to adding components to objects rather than (e.g.) sub-classing them. I could do a better job than I’m currently doing so this way of doing things does feel a little ‘rough’.

Those are my 2 prefabs and the behaviours on them. I then have a ‘placeholder’ in my scene which does some more work.

The Placeholder and GameState Script

My placeholder has a bunch of scripts associated with it, all but one of which are straight out of the HoloToolkit without any modification to the settings; 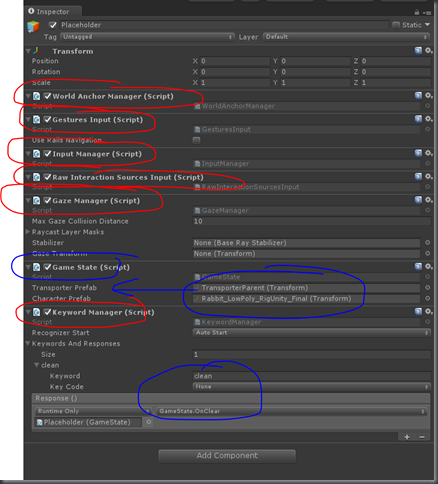 in the screenshot, all the red bits are just scripts used without any changes from the toolkit. The blue stuff is where I have added my own script (GameState) and you’d spot that it has two properties for the Transporter Prefab and the Character Prefab (the rabbit) and also that I’ve used the Keyword Manager in order to link the Clean spoken keyword to a GameState.OnClear method.

and while that code might be a little bit ‘clumsy’, I don’t think there’s too much in there that shouldn’t be fairly obvious in terms of what it’s doing and the code around loading world anchors is something that I’ve re-used from a previous blog post.

I think it’s fairly clear that the way in which I’m identifying my 2 transporter objects is pretty clunky and there’s perhaps a need for some other classes to manage (e.g.) the world anchors but this was my first rough sketch to try and get what I wanted working.