Voice is really important as both an input and output mechanism on the HoloLens and there’s a great section in the documentation over here on working with it;

and it’s fairly easy to add the ability to have the device speak in that I can add the “Text To Speech Manager” script onto a game object in Unity; 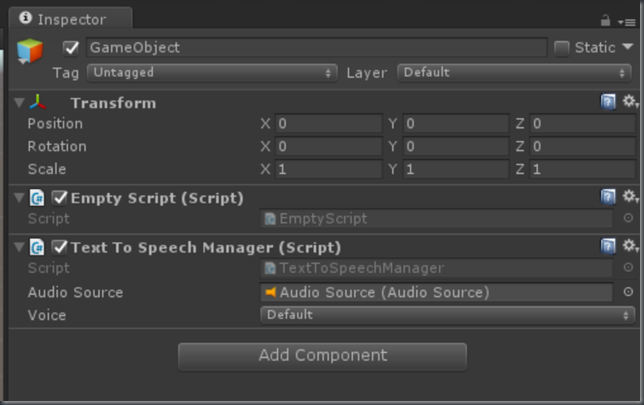 and that script comes from the Utilities section of the HoloToolkit-Unity;

and once I’ve got that in place I can easily ask it to speak on my behalf with code such as this which is running within a method on a script that is attached to my GameObject;

And you can see the code for the TextToSpeechManager over here on GitHub.

There’s one caveat though in the code above and that’s that the model employed by the Text to Speech manager code here is one of ‘fire and forget’ and so my code above which is trying to have 3 distinct pieces of speech spoken doesn’t really work and what I usually hear when I run that code is a spoken output of;

I wanted to see if I could tweak that a little and so I wrote some exploratory code based on what I saw in a slightly earlier check-in of the Text to Speech manager and my main change was to try and alter the implementation such that calls to SpeakText or SpeakSsml were effectively queued such that a second call would execute after the first one had completed playing.

I initially thought that this would be pretty easy but it turned out that the underlying Unity AudioSource object that underpins this code doesn’t really seem to have a great way of letting you know when the audio has stopped playing. It seems that the options are to either;

There may be other/better mechanisms but that’s all I found by doing a search around the web.

The existing TextToSpeechManager code already does work (on lines 239 onwards of function PlaySpeech) to ensure that it moves most of the work of generating speech from text via the UWP’s SpeechSynthesizer APIs into a separate task but (as the comments in the code around line 297 of function PlaySpeech say) the actual playback of the audio has to happen on the main Unity thread although I don’t believe that the call to Play is a blocking call that would halt that Unity thread.

I wanted to leave as much of this code in place as possible while adding in my extra pieces that queued up speech rather than always trying to play it even if the AudioSource was already busy which is what the existing code seems to do and it felt like to do that I would have to implement some kind of queuing mechanism which took into account;

At this point, I could see a few different ways in which I might be able to implement this functionality with Unity and I figured that I could maybe;

The last one is perhaps the most elegant but in the end I went with using the InvokeRepeating method to schedule some work to be checked ‘every so often’. There are probably better ways of doing this but it’s all part of learning

In order to get something going, I took the existing code and did a few things.

I took some of the code from the existing TextToSpeechManager and refactored it into this ‘audio helper’ class below. Largely, this is just the original code move into its own static class;

I added in my own abstract base class which tries to encapsulate the idea of a queue of work to be processed where items are taken off the queue and worked upon in sequence. This is quite a generic problem to solve and you can get into aspects of multi-threading and so on which I’ve avoided here and this little class isn’t as generic as it could be because I’m bending it to my specific requirements here in that;

and my little queue class ended up looking like this;

3 – Derive a Text to Speech Manager

I derive a new variant of the original TextToSpeechManager from my new IntervalWorkQueue as in the code snippet below and this class is making calls out to the refactored UnityAudioHelper which I listed earlier. The main ‘features’ here are that the Start() method calls base.Start() in order to get the interval work queue up and running and that the DoWorkItem and WorkIsInProgress methods and properties have been overridden to call into the original code whereas the original PlaySpeech method has been reworked to simply call base.AddWorkItem to add an entry onto a queue.

That’s pretty much it for this post. If I now add an instance of my TextToSpeechManager to a game component as in the picture below; 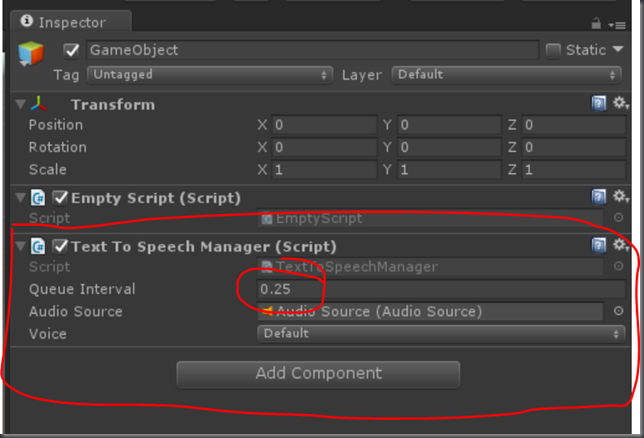 where the interval has been set to poll the queue at an (aggressive!) 250ms interval then I find that code like this;

now plays 3 distinct lines of speech rather than one which is what I had been hoping for when I started the post.