I wrote a previous (now out of date) post about the changes that come with implementing background tasks in Windows 10 Anniversary Edition here;

and some of that was based on the //build 2016 session here;

and that came before the official article that followed it came out on the Windows blog;

which went into the full detail and I’ll admit that the last time that I read that document I skimmed some of the pieces that are titled;

“But first, the fundamentals”

and I revisited them in the meantime and Matt’s article the other day prompted me to write some of that up;

After the official article came out, I had to have a bit of a re-think around the EnteredBackground and LeavingBackground states that are now part of the app model and every UWP developer should familiarise themselves with how those events work because they have implications for how you do state management in an app.

I had a vague notion in my head around how these events worked but I hadn’t fleshed out the details properly and so in order to play a little with this, I wrote a little code to try and make an ‘app’ that watches various events in this lifecycle. Here’s the app running on my PC; 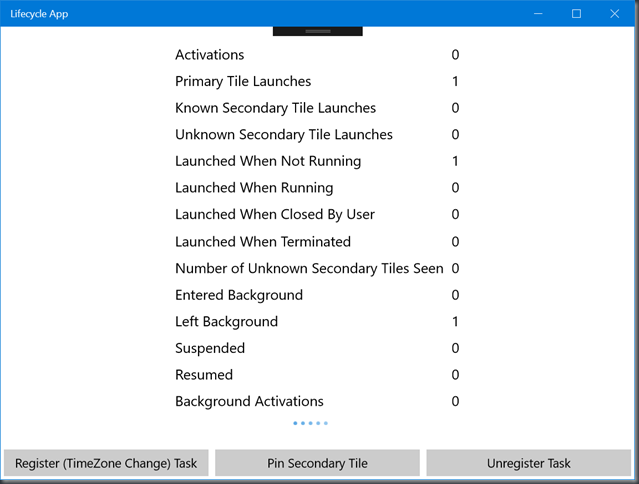 What app tries to do is to count (across instances) how many times it has been;

There’s also an indeterminate progress bar to see whether the app’s updating its display or not and 3 buttons (left to right);

In the screenshot above, I have launched the app from the primary tile (count 1) and it has been launched when it wasn’t running (count 1) and has left the background state (count 1).

The one part of this app which is perhaps a bit weird is the idea that the app can be launched from a secondary tile that it hasn’t created. That’s one for another blog post but, in the meantime, I found this an interesting little app to play around with and so I’m sharing the code here if others want it (or want to fix it

The code was written in a bit of a scramble so please apply a pinch of salt and unexpected results might be bugs! Also, forgive the naming of ‘App52’ in there