One of the things that I noticed yesterday on my dev PCs running Windows 10 1607 or Anniversary Update was that the Windows Device Portal has appeared and (I think) in a new incarnation on these PC builds.

I was in the ‘developer settings’ for this particular PC and I saw the option to switch on the Device Portal with or without authentication for local network connections; 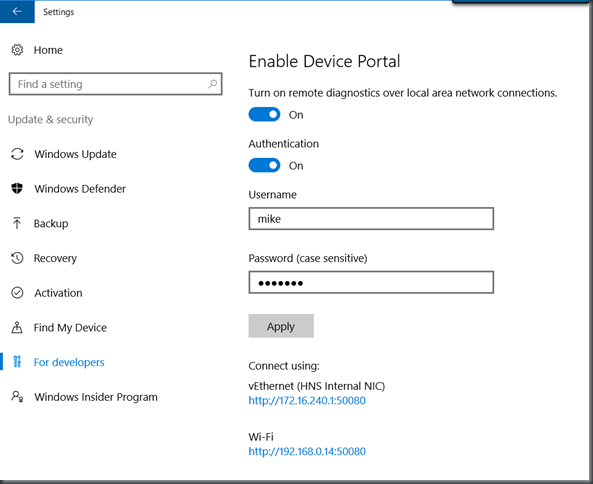 and so I did just that and then pointed a browser from another PC on the same network at that endpoint and got the updated UI; 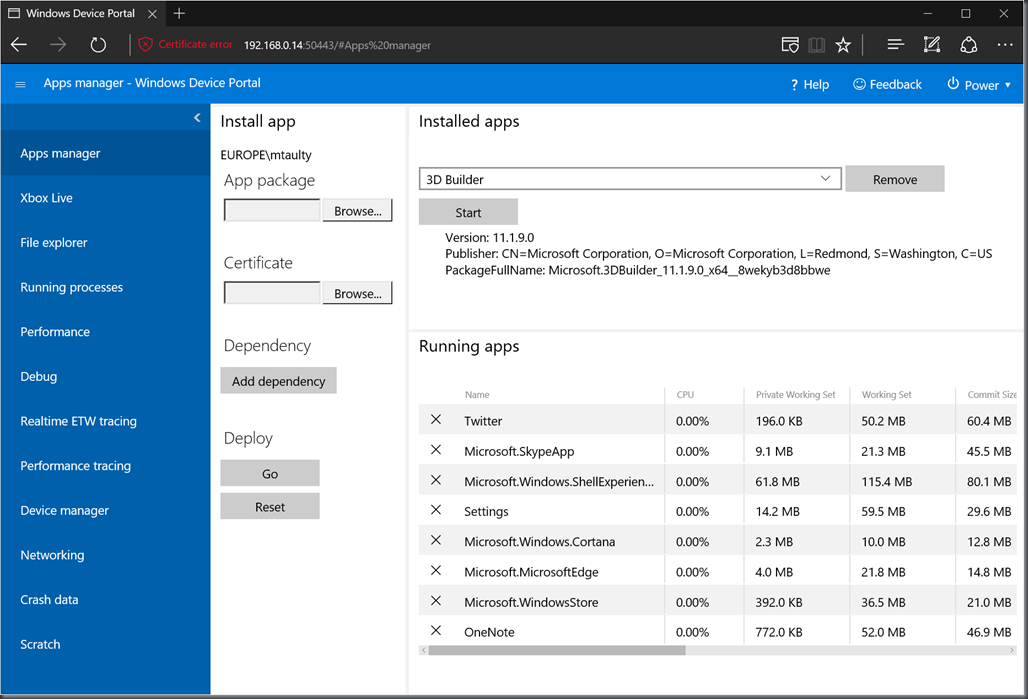 and it’s kind of fun to take some of the installed apps here and use the “Start” button to launch one of those apps on the remote PC.

This was possible on phone and/or IoT but there’s something about doing it on a PC build that feels a bit different. It’s also possible (as on the other devices) to use this as a way to deploy .appx packages and their dependencies.

The new UI offers drag/drop/dock tabs so that you can remove areas; 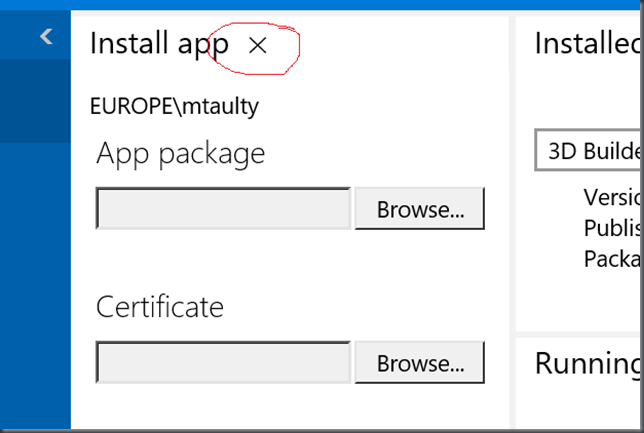 or drag/drop them around; 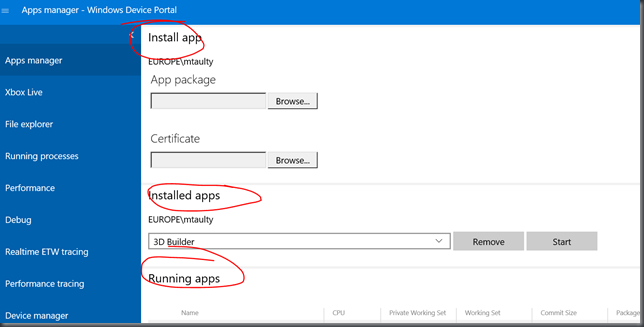 and it’s also possible to create your own workspaces with whatever tools you want via the new workspace option; 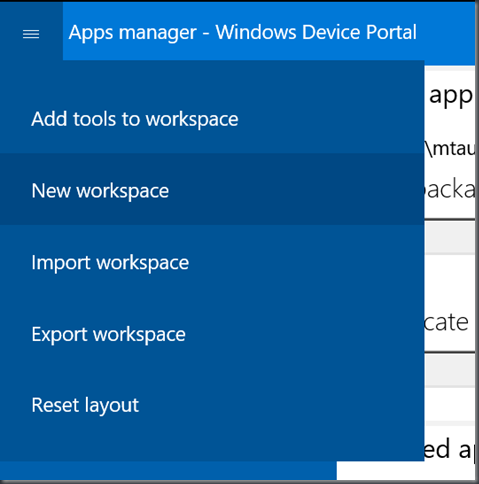 which lets you name it;

and then add tools to it, including the tool named ‘Coming Soon’ 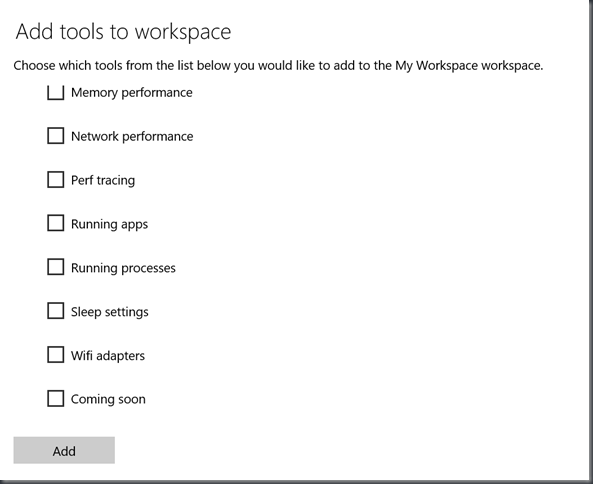 Beyond the UI changes, the other things that I noticed here which feel new are…

The ‘Xbox Live’ section although that’s currently in a ‘Coming Soon’ state.

The ‘File explorer’ section looks like it would be useful for working with files that live within the part of the file system which is devoted to storage for Store apps and if you followed my last post here you’d know that I’d installed the InkScape app as a UWP packaged desktop app onto this machine and you can see its section of the file system here; 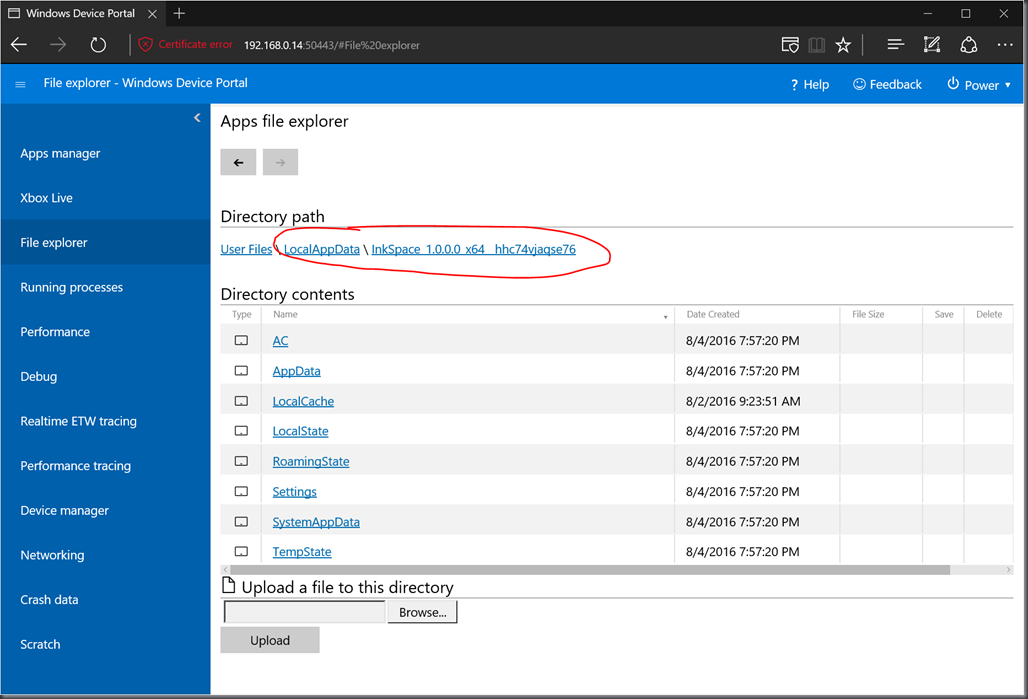 whereas the other part of the Task-Manager-like-UI is provided by the ‘Performance’ tab which looks to have had an update;

and most of the rest of the UI is as I remember it, albeit factored into these new, resizable panels.

I’d have to say that while I was trying this out I did find that the UI could become a bit unresponsive and I’d have to refresh the browser page from time to time. I’d also say that those graphs on that ‘Performance’ tab above don’t seem to be showing me actual graphs so I’m not sure whether that’s a bug or not.

The other thing to remember with this portal is that it surfaces not only a UI but also set of REST APIs which means that you can do things like deploy or undeploy packages using these APIs.

As an example, I might try and find a particular package on this machine…

and that works quite nicely and I can go on to uninstall that package should I want to try and get rid of the Calculator and so on.