One of the things that has been missing from the UWP and the Windows Store has been the ability for one application to extend another one and the Anniversary Update makes this possible.

Perhaps the most obvious way in which this shows up is in the Edge browser which now has the ability to support extensions and I’d heartily recommend watching the (developer) session around Edge extensions here from the Edge Summit as hosted on Channel 9. 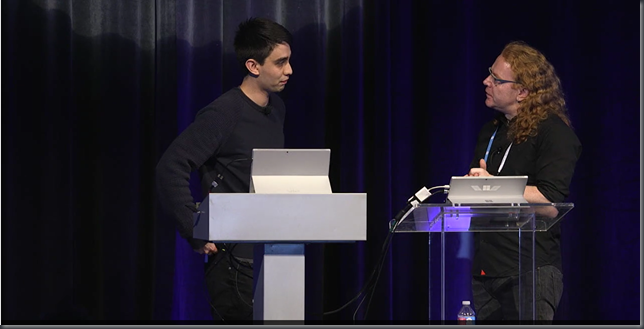 but that’s an Edge specific story whereas extensions are something that many app developers might want to make use of.

Before getting to extensions, it’s worth remembering that on the UWP it’s already possible for one application to ‘invoke’ another via a few different mechanisms.

Off the top of my head those might include.

How to Launch an App for Results

Data is transferred using the ValueSet dictionary and there are possibilities for exchanging more complex data by passing tokens to files through a ValueSet by making use of the SharedStorageAccessManager where either side of the transfer can use the AddFile method to get a token for a file that the other side of the transfer can then get hold of by using the RedeemTokenForFileAsync method.

What does have to be considered here is the ‘protocol’ for this communication as the launcher and launchee apps have to have enough knowledge of each other a priori in order to be able to communicate – the developer of the launcher has to know what to put into their ValueSet and what to expect back.

If none of those mechanisms are enough then an application can invoke an ‘app service’ offered by another where that service is a particular type of background task that is known to the calling application. The detail on that is here;

Create and Consume an App Service

and I remember making a basic demo of this (where one app provides a photo search service to another) back in October of last year;

Once again, the data that flows back and forth here between the consuming app and the providing app is modelled in ValueSets and, once again, that can include files.

The calling app still needs to know quite a bit about the app that it wants to call in order to set up an AppServiceConnection and that includes;

One last but sometimes forgotten possibility for two apps from the same publisher to share data with each other is via the ‘PublisherCacheFolder’ which is part of the ApplicationData class and is documented here;

and can be useful for a ‘suite’ of apps that come from the same publisher that don’t need to use some of the more complex mechanisms described previously.

Some of this landscape of existing mechanisms via which one application can ‘talk’ to or ‘invoke’ another is explored in this //Build session; 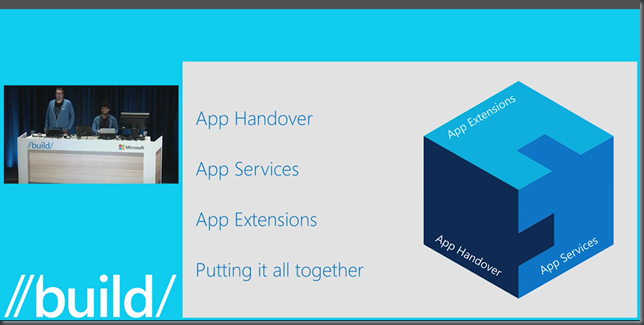 and I think the various bits that I described as ‘launching’ above are slotted into the section named ‘App Handover’ and then there’s a section on ‘App Services’ and the coverage is good with some good demos so it’s well worth watching if you’ve not been through those bits before.

Around the 25m mark the video transitions into talking about the new app extensions support that comes with the Windows 10 Anniversary Update and from what I’ve seen so far this provides a fairly generic and lightweight mechanism whereby one app can contribute to another I wanted to try out a ‘hello world’ experiment with this and the remainder of this post is a write-up of where I got to.

The App Providing the Extension/s Declares Them In Its Manifest

The schema which defines how this is done is specified on the web here;

and it’s worth noting that the Category here needs to be set to “windows.appExtension” and that the attributes Name, Id, PublicFolder, DisplayName are all mandatory on the AppExtension element and, at the time of writing, Visual Studio does not seem to have UI for filling out these details in a manifest.

For my example, I declared a manifest which looked like this offering up two extensions named (imaginatively) “MyExtension” and “MyOtherExtension”;

and I made 2 empty folders within my project as below; 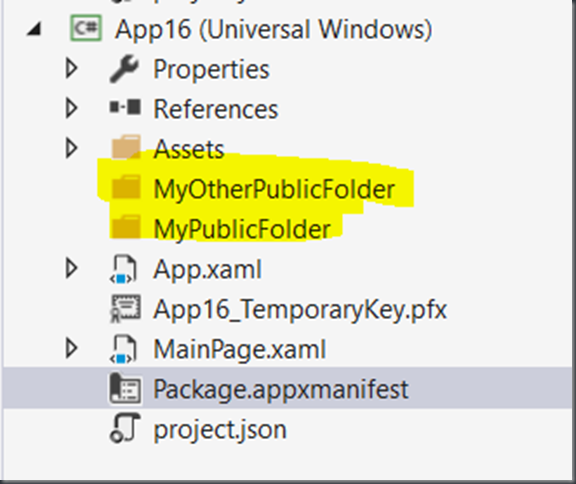 The App Consuming the Extension/s Declares Them In Its Manifest

I added an app to consume these extensions to my solution and changed its manifest according to the schema specified here;

The App Consuming the Extensions Opens Catalogs By Name

In my consuming app, I wrote a little code that looked like this (all called from a simple UI button);

Sure enough – initially my code finds 0 extensions of the two types that I’m interested in (“MyExtension” and “MyOtherExtension”) and then when I deploy the package containing the extensions it later on finds 1 of each type.

It’s worth pointing out that an app that’s consuming extensions can (and probably should!) be notified if those packages which contain the extensions change while the app is running and there are events for all of this hanging off the AppExtensionCatalog class. Specifically;

For some of those, it seems fairly obvious as to what your code would do in a particular case but the PackageStatusChanged event is interesting to me as it provides the detail of the Package and then the Status property can be used to interrogate lots of properties around whether it is available or, if not, why it’s not available. See PackageStatus for the range of options there including the VerifyIsOK method.

Once the consuming app has a catalog open, it can enumerate all the extensions within it. In my example, this is easy;

and that produces the output;

and we can use the Package property to get hold of things like the Logo for that package if we wanted to display it. Naturally, my two extensions here come from the same package and so their PackageFamilyName and InstalledDate properties are going to be the same.

I can easily enumerate the properties that I specified on my extension in the manifest. If I add in this additional code to the loop above;

then for the extension named “MyExtension” I get the expected output whereas for the extension named “MyOtherExtension” I find that the call to GetExtensionPropertiesAsync() throws an ArgumentException. I’m unsure whether this is a ‘preview thing’ at the time of writing or whether there’s a better way to avoid that exception but my output looks as below;

and so I could use this mechanism to grab whatever metadata has been made available about an extension and then use it to make decisions around where that extension is useful.

So far, we’ve managed to get to an extension and grab some metadata about it but we’ve not really been able to do any extending as such but each extension has to have a PublicFolder property and so we can use a method on the AppExtension class itself to get hold of that folder and then grab content from it.

To that end, I added a simple text file to each of the public folders that I’d set of on my extension project;

and then I updated my manifest such that each extension had a property which specified its TextFileName;

and then I added a TextBlock named txtContent to the consuming app’s UI and wrote some code to try and populate it as/when extensions show up on the system and as/when they get uninstalled or changed.

So…so far, so good and this would work for scenarios where an app wanted to extend itself with content that came from pure files like;

and so on but it doesn’t let an extending app add any additional code to the app that it’s extending.

Back to App Services

It’s clear that this infrastructure can be used to improve the situation around app services in the sense that if an app is to be extended by other apps offering up an app service then this model allows the app to;

But I think this is still better than the app service situation today and there’s a demo of doing just this in the //Build video linked from the image above. I’d like to write my own just to try it out and I’ll perhaps do that in a separate post.

I’d also like to think about whether this infrastructure gives any scope for dynamically loading code into the app being extended whether that is by loading up compiled code (e.g. an assembly) or whether it be by dynamically trying to compile code. I’m not sure on either of those yet so I’ll return to them too at a later point.