Update: I wrote this before the official post here added more detail about this single process model for background tasks so read that first and then feel free to also read my early experiments below

For quite a while I’ve been meaning to write some posts about the Windows 10 Anniversary Update (currently in preview) and some of the changes that it brings to UWP app development but time has been getting the better of me.

One of the areas that I did pick up on at //Build was that the way in which background tasks are implemented was being changed and I really wanted to dig in on this and try it out.

This was discussed in the excellent session that Chris and Stefan ran; 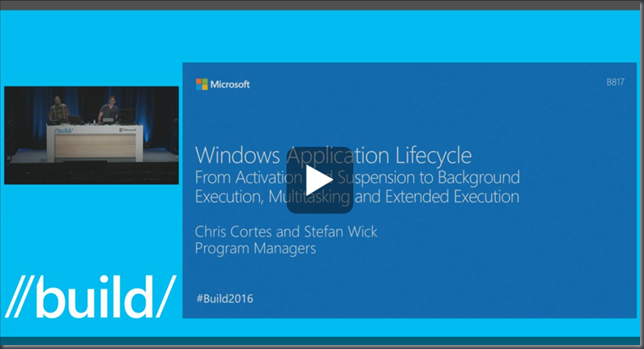 where they introduce the idea of a “Single Process Execution Model” (around the 10min mark) for background tasks.

Since Windows 8.0, modern WinRT based apps have had a clear model for background execution based on the ideas of triggers, conditions and tasks and I walked through some of that myself back in 2015 at TechDays in Holland.

The essence is that a developer registers their background tasks to run in association with some trigger (e.g. a timer or the arrival of a push notification from the cloud) which can be further filtered by a condition (e.g. internet availability).

What’s always been a little bit painful though was the way in which you needed to implement background tasks in that;

Having to write a custom WinRT component isn’t the end of the world but for a .NET developer it does mean that you have to create an interface to that code which is modelled in the type system of WinRT rather than the type system of .NET and so you don’t get to play with Task<T> and so on although there are extensions in the framework that take away much of that pain.

Having your foreground and background code executing in different processes (albeit in the same app container) is a little bit more limiting in that it makes exchanging even the most basic of information between the two a bit trickier than it would otherwise be. For example, the provided mechanisms help you to;

Those are fine but there are times when a uint isn’t really the way that you’d like to pass rich data between two processes and so the Anniversary Edition is simplifying this by adding a new way of building background tasks such that;

This felt like something that had to be tried rather than talked about and so I spun up Visual Studio on my installation of the 14352 preview build and set about experimenting.

I needed some scenario to play with and so I figured I might try and write a background task which “indexed” all the music files in the music library on the PC in the sense of visiting them and building up at least some level of information about them.

In a real music app, I’d imagine that it might be attractive to;

but I wanted to keep my code very simple and so I didn’t get bogged down in 3 and just went for 1 and 2 and wrote the code below;

The essential idea here is of a static class with RunAsync and CancelAsync methods which then tries to recurse (in a naive way) through the music library, gathering files one by one and writing some of their music properties into a file calls titles.txt. The code deliberately introduces a 1s delay each time it finds a new file and it also fires an event to signify Start/NewFile/Completion as it’s going along.

It’s not great code but it’s something to play with and so I put a simple UI on top of that;

which provides a simple data-bound ListView and 2 buttons to Start/Cancel the indexing process and two visual states for [running/not running].

I scribbled a little code behind here;

and the code here which handles the observable collection, the button presses, the visual state changes and the events from the MusicIndexingService is fairly self-explanatory.

Something that I needed to think about a little bit more was the idea that if my MusicIndexingService was to be made available as a background task then it’s perfectly possible that at the time when my app is Launched and navigated to this MainPage and hits the OnNavigatedTo override it may be the case that the process it is running in was already up and running and running the MusicIndexingService in the background.

That’s why the code in OnNavigatedTo does not assume that the visual state for the newly navigated page should be _default but, instead, tries to ask the MusicIndexingService whether it is already running and determine the current visual state based on that.

I changed the App.xaml.cs code that ships with the blank template in Visual Studio 2015 Update 2 so as to add some code to register my background task;

Notice that the code here is using SystemTrigger with a TimeZoneChange but my real code would use a TimerTrigger with some maybe 6-12 hour interval.

Notice also that this code does not set up an EntryPoint property for the task, it leaves it blank and that means that the App class itself is going to provide the entry point and I’ve set up my manifest that way; 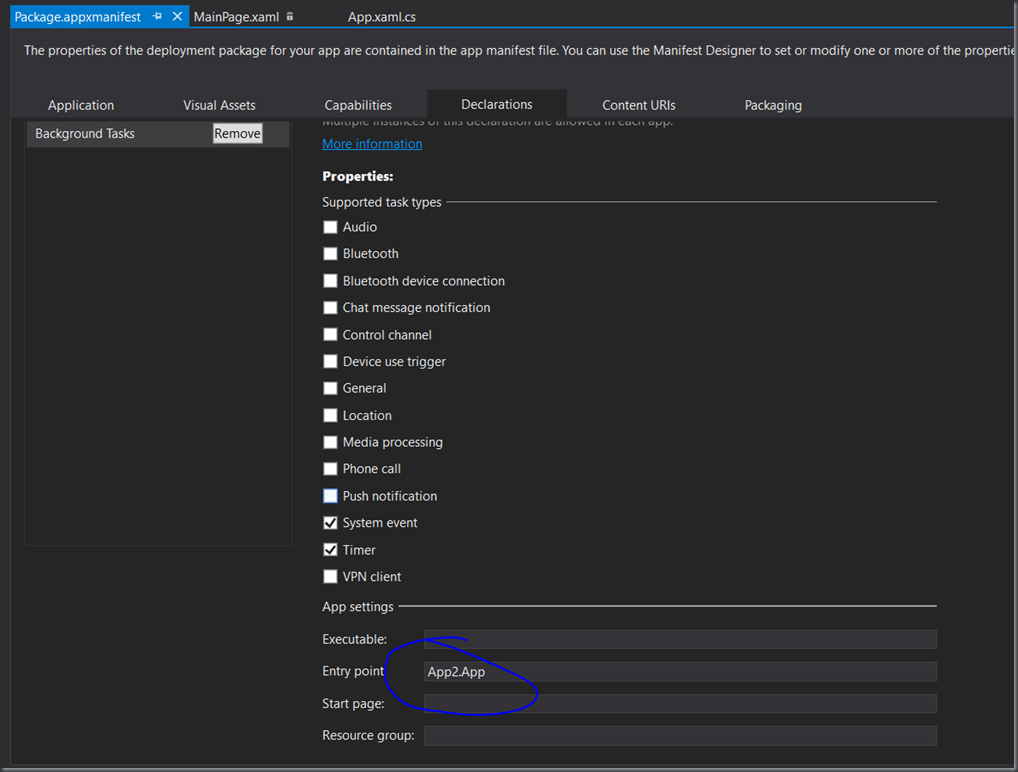 I can’t say for certain whether that’s the correct way to do it but I can say that it’s working for me at the time of writing. I then went ahead and implemented OnLaunched on my App.xaml.cs such that it called my RegisterBackgroundTaskAsync method every time the app started up;

Other than that, it’s pretty generic and then I added in the new, crucial override for App.OnBackgroundActivated which is where my task can be implemented rather than having to have a separate project with a WinRT component;

and this is, hopefully, fairly simple and looks a lot like how you would have written an implementation of IBackgroundTask in the past but without the ceremony of the WinRT component and so on.

I also tried to factor in a little around suspend/resume although my music indexing service is fairly basic and so the best it can do is [start/stop] in response to [resume/suspend];

I should say that when I use the term ‘background work’ here what I mean is work that has been triggered by the system invoking the OnBackgroundActivated method rather than the user setting some indexing in progress by clicking a button.

Firstly, the code seems to pretty much hang together and work in the sense that I copied a couple of albums into my music library and then ran the code and pressing the ‘reindex button’ started the process; 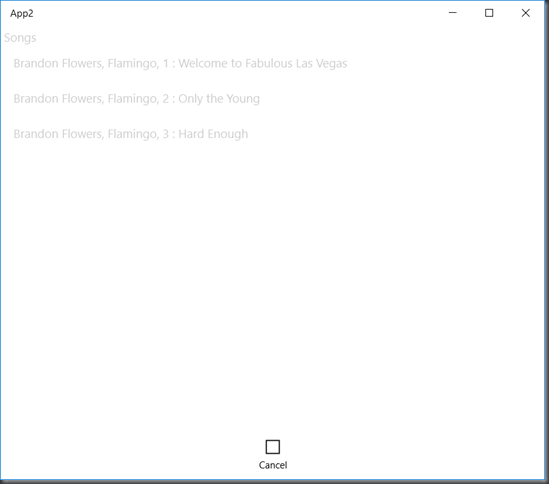 and the ‘cancel’ button stopped it so that was good.

If I then changed the timezone on the machine, my background task did get invoked and I saw the UI refresh itself again as the music got reindexed; 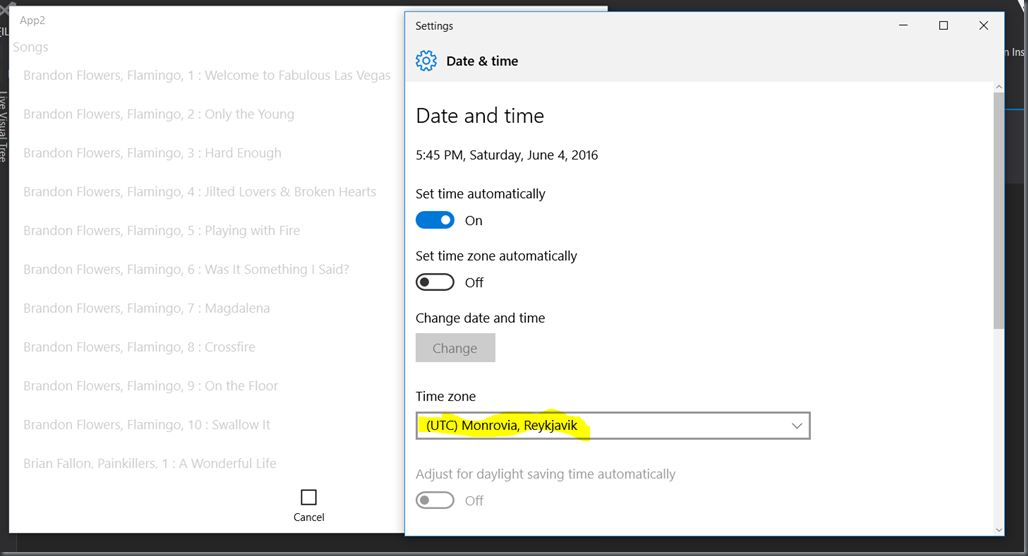 A quick look with the debugger seemed to suggest that the answer to my first question (1) above is that the OnBackgroundActivated method does seem to get invoked on the UI thread.

I could also easily see that if I changed my timezone while the app was running then the file titles.txt in the app’s LocalState folder would get deleted and then rebuilt with the song titles and so that seemed to work ok – i.e. the background task is firing up in the background.

As an aside, the ‘lifecycle events’ dropdown on the Visual Studio ‘Debug Location’ toolbar still seems to work fine for invoking these new type of background task implementations

To answer my second question above, I made sure the app wasn’t running and then I changed the timezone and saw the process spin up in task manager; 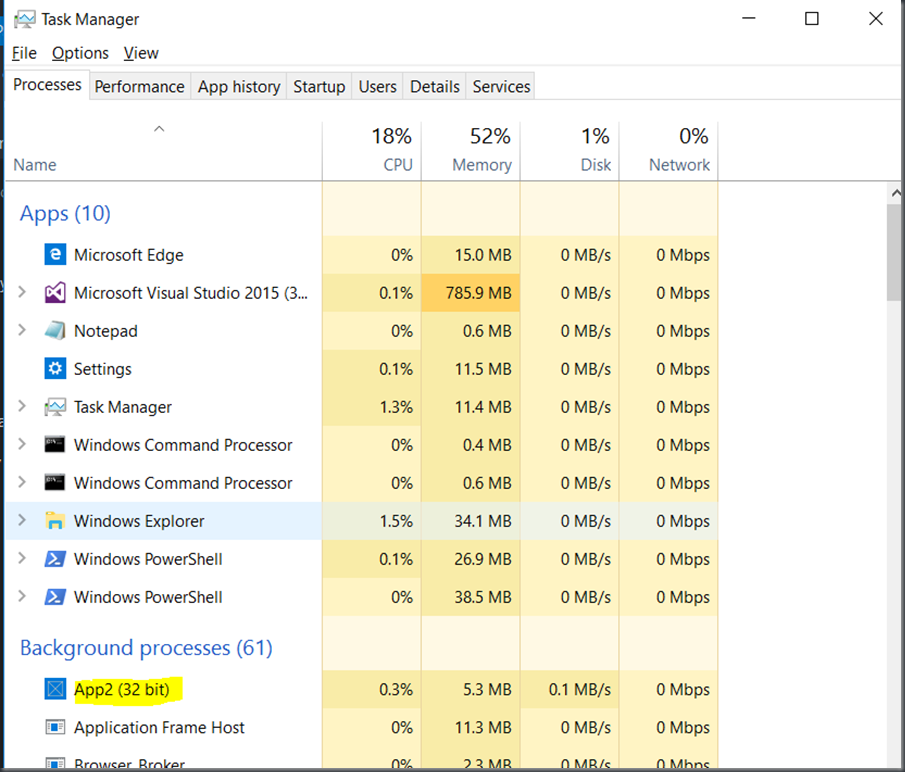 and you can see that the app springs up under the ‘Background processes’ section. If I then launched the app while the background task was still running then I’d see the process migrate; 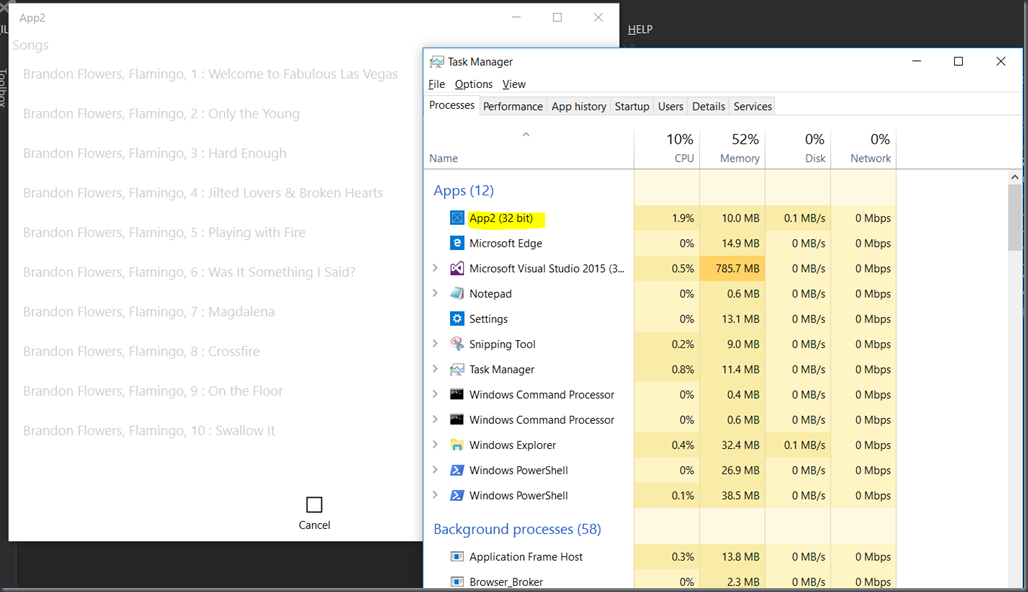 and move into the ‘Apps’ section of task manager and the code that I’d written in the OnNavigatedTo override of my MainPage is clearly getting run to handle the scenario when the app launches and finds that the music indexing service is already running inside that process. That is – it all works much as I’d expect it to.

The remaining question that I had is around what happens in a scenario where the foreground app suspends/closes while the background task is running in the same process.

Does the background task continue? Does it get cancelled? Does it just get killed?

I’m not 100% sure on the answer here yet but I’m fairly confident that the task doesn’t continue to run in the current preview bits.

In so far as I could tell in the debugger the background task did not get cancelled either, the app simply got its Suspended event and then closed down.

In my code, I’d added a property onto my MusicIndexingService such that I could know whether it had been run from foreground code or background code.

The idea of that property was to have different behaviour in my suspending event handler – if the indexing was from the foreground, I’d shut it down whereas if it was from the background I’d try to leave it running.

Based on what I see at the moment, that code would be redundant but maybe that’s just part of the preview and things may change over time.

I really like what I see here – it’s much easier to write a background task using this infrastructure than the previous infrastructure involving WinRT components and different processes but it feels like there’s a need for a good write-up and sample somewhere which answers the questions around how this interacts with threading and how it interacts with the suspend/resume/terminate lifecycle. I’m sure that will come at some point in the future as the Anniversary Update and the accompanying SDK update get closer to release.