We all know that the way in which we interact with computing devices has changed and continues to change.

If we go back maybe 10-15 years then we interacted with devices in the way in which they could best accommodate us.

We had graduated from punch-cards on to keyboards and screens and mice and those mechanisms stuck because they were highly productive for a lot of the computing tasks we undertook but they are mostly about the human bending from their natural modes of interaction to use ones that a machine could hope to process.

Those modes of interaction work well to the present day and I’m using them to type this blog post. They haven’t gone away and I doubt they will in the foreseeable future.

But in the last decade or so, the devices that we’re using are taking different forms. Forms that don’t always sit well with the traditional mechanisms for input and output. Forms that fit into your pocket or on your wrist or sit on a wall in a shared space.

These form factors often need different types of interaction and we’ve seen the rise of touch and speech and especially in the realm of the smartphone and the tablet.

The fact that those types of interaction mechanisms even exist though is testament to at least a couple of things;

For quite a while on this blog, I’ve been experimenting with various technologies that fit into this space mostly with a Microsoft slant – technologies like;

and a few more and it feels like this is an area where the technology becomes more capable and available on an almost daily basis.

Recently, I wanted to bring some of this together in a form that’s more structured than some of the posts on this blog and so, with my colleague Andrew, we made a new show for developers on Channel9 that we called ‘Context’.

I say ‘for developers’ because a big portion (probably about 80-90%) is code.

Right now, we have 2 episodes published. 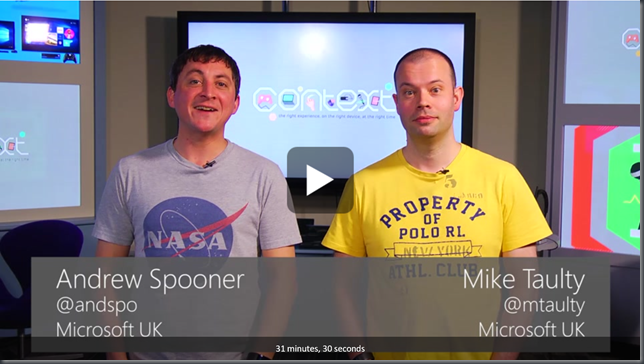 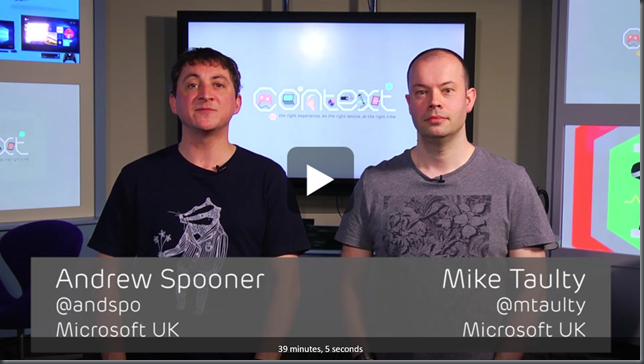 It’s because we believe that ‘context is king’. I’ve written about this elsewhere mostly as a way of trying to get my own thoughts in order on the topic

but the idea is that mechanisms like speech, touch, pen, ink, gaze, gesture, body tracking, mice, keyboard, screens, holograms, etc. only bring benefit when considered in the light of the user’s context which includes at least;

and perhaps a few more dimensions like network connection, time of day, etc.

We’ve got more of these shows coming over the next few weeks and months, on a 3-4 week release cycle and we’re very keen to take feedback so if you watch any of them please do leave comments on the Channel 9 page for us to pick up.