Following up on my previous post, I said that I’d return to ‘Project Oxford’ and its capability to do speaker verification and identification.

You can read the documentation on this here and you can try it out on the web;

and I learned late in this process

that while there does not seem to be a client SDK package as such for the Windows10/UWP developer that surfaces these REST APIs into your environment there are some .NET samples;

That said, those .NET samples seem to use NAudio in order to generate an audio stream and I wanted to use UWP APIs to do that and that’s where most of my effort went in trying out the ‘Oxford’ speaker recognition APIs.

I’ve only really dug into verification so far but I think that in both cases you work with ‘Profiles’ and for verification the process runs something like this;

That’s about it when reduced down to a few sentences. I think the service currently supports 1000 profiles so, effectively, 1000 users.

I wrote a little Windows 10 UWP app to try out the verification service and, lacking the discovery of the WPF sample, I wrote a bunch of classes that I could have more or less taken straight from that sample code if I’d known about it before I started; 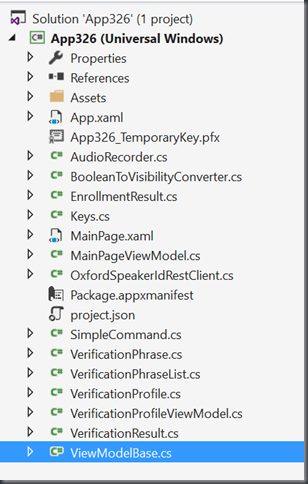 I didn’t write mountains of code but it’s perhaps too big to go into a blow-by-blow account of here and most of it is just REST calls and JSON de-serialization.

I did, though, spend quite a long time on it and for one reason only…

I used the UWP AudioGraph APIs to create a byte stream containing a WAV container wrapping a PCM audio stream sampled at 16K in mono with 16-bits per sample.

That’s what ‘Oxford’ said that it wanted and that’s what I tried to give it. Many times over

Every time I submitted one of these byte streams to the ‘Oxford’ speaker recognition enrolment APIs I would get some kind of ‘PCM is required’ error.

After much head scratching, I found myself going back and reading a resource that I’ve used before on WAV file formats (like when I wrote this old post).

I found that if I opened up a WAV file from c:\windows\media with the binary editor in Visual Studio then I would see a header something like;

whereas the WAV byte stream that was coming out of the Windows 10 UWP AudioGraph APIs looked like this;

Clearly, the characters ‘JUNK” stood out for me here and, in as far as I can tell, this second WAV file contains a ‘JUNK chunk’ of 36 bytes. As far as I know, this is valid and is certainly mentioned here and it doesn’t seem to cause Groove music or Windows Media Player any troubles.

However…it did seem to cause troubles for the ‘Project Oxford’ API in that I found that when my stream contained the ‘JUNK chunk’, I got errors from the API whereas once I removed that chunk (and patched up the file length which is also stored in the stream) then things seemed to work so much better

Consequently, my code currently has this slightly hacky method which hacks the byte stream that comes out of the AudioGraph APIs before it gets sent to ‘Oxford’;

Once I had that code in place, I seemed to be able to submit audio to ‘Oxford’s speaker verification endpoints for both enrolment and verification with no hassle whatsoever.

I’m not sure whether I could somehow push the AudioGraph APIs to not emit this JUNK chunk but, for now, I’ve gone with the hack after wasting quite a few hours trying to figure it out.

Putting it together, I have the most basic UI which runs like this – the demo below is a little bit ‘dry’ as I’ve not got a community of users to try it out with as I write this post but maybe you can try it out yourself and see how it works for you with a set of voices;

If you want the code, it’s here for download but there’s a #error in a file called Keys.cs where you would need to supply your own API key for Oxford’s speaker recognition API.

With the code as it is, I don’t think it’d be too hard to add on calls to the identification service and try that out as well. I might get there in a follow on post…

You could imagine building a system (web connected) that used Oxford’s facial and voice verification to add 2/3 factor authentication to something like a secure swipe-card door access system.

At the time of writing, facial recognition is available on device (Intel’s RealSense SDK for desktop apps) and is based on depth camera images (like those used in ‘Windows Hello’).

For voice recognition though I’m not aware of an on-device service whether for desktop or UWP so it’s exciting to see this up at ‘Oxford’ in preview (free) for developers to experiment with.

Give it a whirl