I haven’t found official documentation on this anywhere so I thought I’d write up my own quick notes which I can replace when I find the right web pages to link to – I’ve seen quite a few people talk about the portal that’s present on both IoT Core and on Windows Mobile and I’m assuming on Surface Hub but I haven’t checked that last one at the time of writing.

By way of rough notes…

I’m currently on a mixture of wired/WiFi networking where I have my Surface Pro 3 development machine on a wired network along with a Raspberry PI 2 running Windows IoT Core and a Windows Mobile 10 device (my phone) which connects to the same network but over WiFi.

If I use the IoT Dashboard application then it shows me a couple of devices on my network;

and so it’s showing both my PI and my phone.

If I use the “Open Device Portal” on the Raspberry PI 2 then a browser opens;

What I’ve never shown in public (AFAIK) though is what happens if I use the “Open Device Portal” on my phone. In the first instance, I see an error;

but I can fix that by losing the :8080 port on the address here although (right now) I still find myself with a warning; 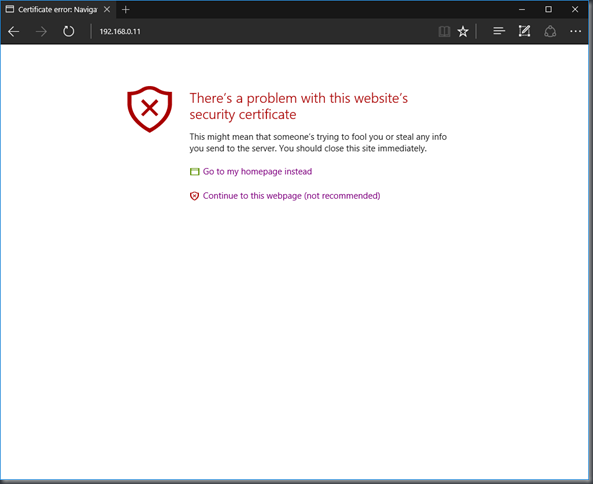 but if I go around that I get to;

and this leads over to the pages on the phone where I can set all of this up. As you can see, I have the device in developer mode;

and you’ll notice that I have “Device discovery” switched on here; 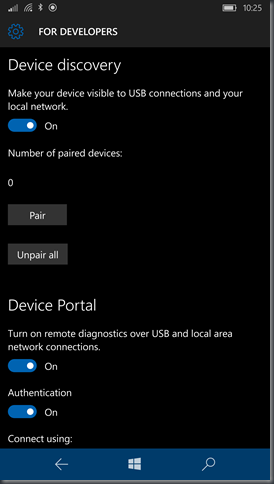 and that it says that this is available over both USB and WiFi, that I have no devices paired and that the portal is also switched on and advertising itself at http://192.168.0.11. 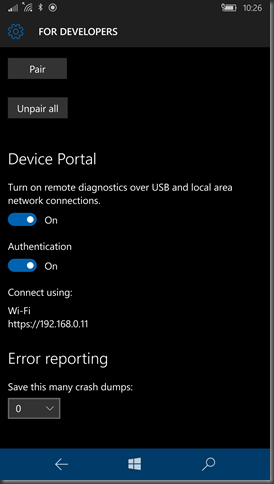 If I then go through that ‘Pair’ process on the phone, I get a code; 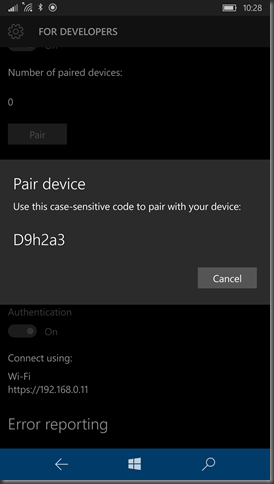 which I can then type into the web page and I’m then onto the portal on the device and here’s the phone portal side by side with the IoT Core portal;

and from that Phone portal I can then go and add/remove/stop/start apps and I can look at performance, networking and so on for the phone just like I can on IoT Core device.

What I’d really like to do is to also be able to debug here over WiFi without having to connect a USB cable and I don’t know at the time of writing whether I can do that or not.

If I unplug the USB cable then Visual Studio certainly sees the device as a remote target over the network if I use the Universal authentication mode;

but attempting to deploy using this mechanism ends up in me being prompted for a PIN;

and I don’t seem to be able to provide any type of PIN here that makes the phone play nicely with me so I’m not sure whether this is just because I don’t know how to provide the right PIN or whether there isn’t a PIN that will work here right now.

Let me know if you know and I’ll update the post.

1 thought on “Windows 10 Devices and ‘The Developer Portal’”