One of the new areas that came along with Windows 10 and the UWP was the ability for one application to offer a ‘service’ to another application. There was a //Build session about this back in May;

with the discussion on app services starting at around the 25 minute mark.

Naturally, the app providing the service needs to take care to ensure that the service that it is offering isn’t open to abuse and there might be scenarios where it makes more sense for the app to support the ‘launch for results’ type of operation that’s also talked about in that //Build video above.

But, app services are a welcome addition to the platform and I’ve been demo’ing them for quite a while with an app that goes off and performs my favourite API call of searching for photos on the flickR service.

In terms of the way in which this is built, there are the 2 pieces as you’d expect – the app offering the service and the app consuming it.

My app service app is very simple. It has 2 projects, one being the app and one being the custom WinRT component that offers up a background task; 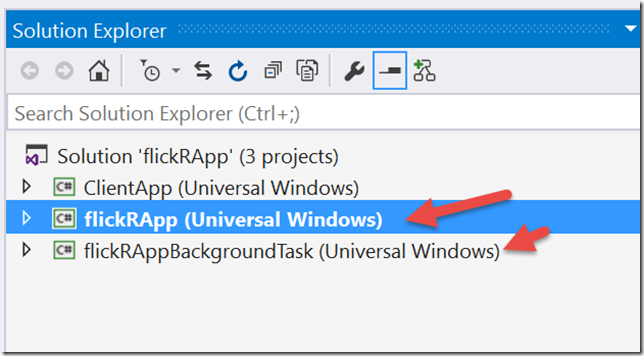 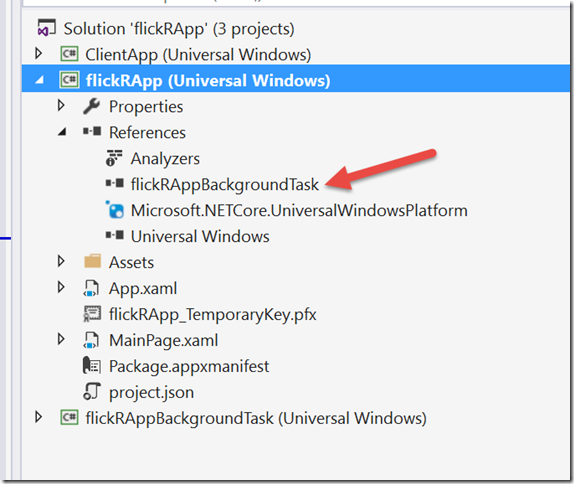 and it has an entry for it in the app manifest; 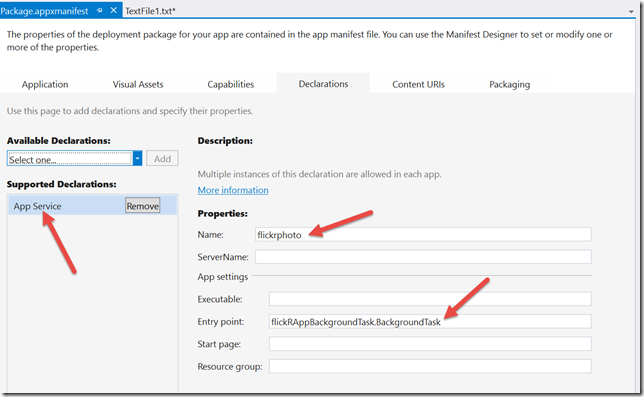 and then it just has some code which populates the UI (and the clipboard) with the details of the service;

Any remaining implementation is in the background task itself;

this does a couple of ‘interesting’ things if you haven’t seen app services before;

The OnAppServiceRequestReceived handler does the rest of the work – the one thing I’d flag here is that the system uses ValueSet in order to pass data to/from the consumer of the app service and the service itself.

ValueSet is just a dictionary and, initially, I thought this might be very limiting for my service because I wanted to pass a file back across the boundary between the service and its client.

However, there’s a means to do exactly that – you’ll see that line 52 is making a temporary file, line 59 is using the SharedStorageAccessManager to get a token for that file and that token is passed back across the boundary to the client of the service such that it can be ‘redeemed’ for the file on the other side of the bounday.

The client’s a pretty simple thing here. One thing it does is to monitor the clipboard and copy and newly pasted items from it in the hope that it might be the package family name from the other app that offers the service;

the other thing that it does is to wait for a button press before attempting to call the app service. That code looks like;

and you’ll see that it makes use of the new AppServiceConnection class and sets up the necessary PackageFamilyName and AppServiceName parameters before attempting to OpenAsync() on that connection.

You’d also spot that it sends a ValueSet across the boundary to the app service where (in my case) that value set simply contains the text of the query that we’d like to execute.

When the service responds we attempt to get the token that was created for the response file and we use SharedStorageAccessManager.RedeemTokenForFileAsync() in order to turn that token back into a file that we can present as a bitmap on the screen.

If you want the code for this, it’s here for download. If you compile it, you’ll find an error at the point where you need to insert your own API key for flickR.