The other week, I wanted to make a basic sample that showed how a Windows 10 device (universally – i.e. a phone, a PC or a Raspberry PI 2 etc.) with appropriate hardware (e.g. on the PI 2 you’d need a suitable bluetooth dongle) could both publish and consume advertisements over Bluetooth LE.

There’s an official sample for this over on github but I wanted to create something from scratch and I wanted to make sure that I understood what I was writing and so I wrote my own.

Since then, I was involved in a hackathon where some of the participants were using bluetooth beacons (or iBeacons) and wanted to detect them from Windows 10 apps and I shared my small pieces of code at that hackathon and it made me think that I should perhaps also write it up and share it here.

I quite like this overview of what Bluetooth LE is and its coverage of the range, data rates and so on;

and that data falls into the categories of advertising/scanning and connections.

I also like the same site’s introduction to using Bluetooth LE for advertising;

and it explains that advertising packets sent by a device have 31 bytes for the payload and that there is a byte specified here which denotes the type of data that is being advertised (with 0xFF meaning ‘manufacturer specific data’).

That guide also explains that a beacon is a device which only advertises (i.e. which doesn’t allow connections) and that an iBeacon is a beacon which sets its Advertising Data type to 0xFF which means ‘manufacturer specific’ and which sets a specific manufacturer ID (Apple uses 0x4C) with those IDs being listed here;

Apple also has some more detail about how an iBeacon should advertise itself which states that a developer should advertise their beacon with a GUID (UUID) which is specific to their app/use case and then also advertise 2 WORDs which are used for ‘Major’ and ‘Minor’ identifiers which might be used to signify (e.g.) country+city or office+floor or some such.

While a developer using Windows UWP APIs can;

they aren’t limited to those scenarios – this is just a narrow subset of the functionality offered by the APIs that the Windows UWP makes available and these APIs are part of the UWP and so exist on phones, PCs, IoT devices and so on.

For my own sample, I thought that I’d write two apps;

My advertising app is very simple. It displays a photo of an Audi R8 (no, I don’t have one

) with a license plate; 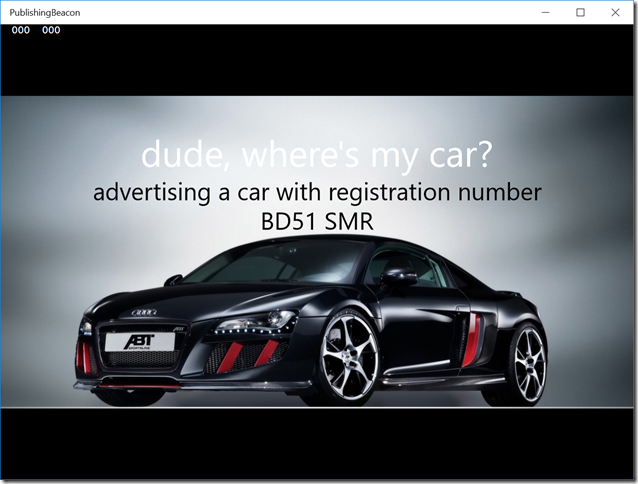 and there’s some very minimal code sitting behind that UI;

Yup, that’s it – the code is publishing an advertisement for a particular manufacturer (in this case 0x010E) and it puts the license plate number into the advertisement packet and starts the BluetoothLEAAdvertisementPublisher pushing that advertisement.

It’s worth flagging that this is foreground publishing and it requires the application to be running which may/may not be ok. For instance – I can deploy this app to my Raspberry PI 2 and leave it running. That might be fine. Conversely, if this app were running on a phone then keeping it running isn’t likely to be very practical.

However, there’s a background way of doing this via the BluetoothLEAAdvertisementPublisherTrigger class which can be used to do similar work from a background perspective.

My scanning app is also very simple. It displays a simple piece of UI; 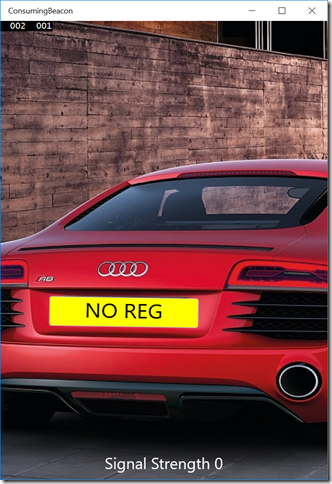 and it spins up a BluetoothLEAdvertisementWatcher which then attempts to listen for the license plate advertisements from the publishing app with a fairly flimsy attempt to keep track of whether it is seeing the same car over a period of time or whether a new car arrives or a previous car is lost;

this works really well in the sense that it detects the data being advertised by the ‘car’ but it doesn’t work so well in that it’s estimation of whether the distance between this app and the ‘car’ is growing or shrinking – that estimation seems to be very rough indeed.

There’s also some basic use of the speech to text API in the app such that it speaks to let the user know what’s going on.

This is a foreground app but, again, this work can also be done in the background via the BluetoothLEAdvertisementWatcherTrigger class so you don’t have to have an actively running foreground app.

Here’s a basic video of this app in action (tethered to the PC which makes it hard to move the app closer/further from the PC which is acting as the ‘car’);

and here’s the code for download should it be of use to you in something that you’re doing.