In order to do that, I need to dig into my own code and try and remember how my camera capture works because I remember that while coding it back on Windows 8.0 I did not;

Mostly for my own benefit, the way in which my current camera capture code works is as follows (in Windows 8.1);

When the CapturePage spins up it tries to figure out which cameras there are on the machine (via DeviceInformation.FindAllAsync()) and it looks for DeviceClass.VideoCapture devices and gives priority to cameras that say that they are located on the back of the device.

If one of those is found, then camera preview is started from that device with fairly default settings and then the whole of the image capture and decoding cycle is represented by this single line of code;

but what happens underneath there isn’t perhaps what you’d expect and it wasn’t what I originally wanted to build in that it’s essentially a separate Task which;

There’s more code in there than I’m implying but that’s about the basics of it and I think the thing that is surprising is that the app does not in any way try to hook into the video frames but, instead, is periodically capturing PHOTOS and trying to decode those.

I’d really rather that I was hooking into the video feed and taking as many frames from that as it can handle rather than snapping photos. I daresay that I can also do a better job of dealing with the camera in general.

One part of that is that I have code in the app to rotate my view to compensate for scenarios where the device is itself rotated – I believe that I can get rid of this in the light of Windows 10 UWP and I’m looking forward to deleting that code if I get there.

But, first, I thought I’d take a look at seeing if I could remove my dependency on my local build of ZXing and move to the WinRT port of that library.

Moving from ZXing to ZXing

In the Windows 8.x version of my app, I’d taken the source for ZXing and built it into the app having (as I remember) made a few changes here and there in order to be able to build it for WinRT.

I took away my reference to my local version of ZXing and went off to NuGet to see what I could find and this is what I came up with;

and, in all honesty, so much debug spew comes out of NuGet doing these kinds of operations; 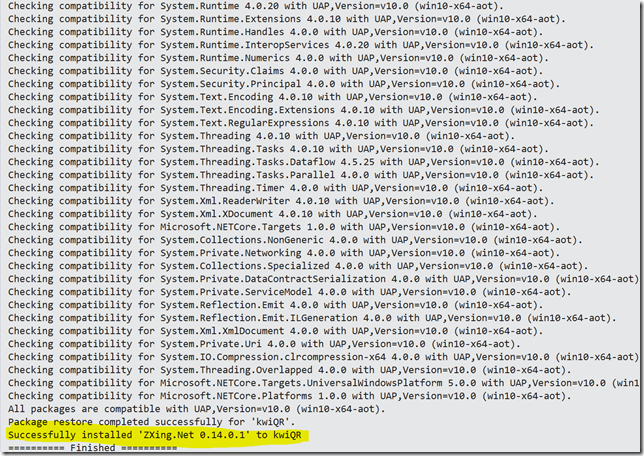 that it’s sometimes hard to know whether the installation of the package actually worked or not but it looks (from the last line) like it did.

Fortunately, all my calls into ZXing were contained in a single class and so I didn’t have to visit much of my code to start trying to replace what I’d done in Windows 8.0.

In doing that though I was keen to keep the existing camera code working while replacing ZXing even if that means that I’ll ultimately do more work than necessary when I rework the camera capture part of that app to (hopefully) work better and with better performance on Windows 10.

Here’s the code that I had on Windows 8.x and, in all honesty, I’ve lost track of why it was attempting to do some kind of pixel conversion but, regardless, that’s what it was doing;

and the modified code (preserving the interface into the function);

and so I’ve less code in here and it’s doing less work and my whole solution now drops down from 2 projects (app + class library) to a single project.

And, so far as I can see, the app is still recognising QR codes much as it did previously.

So, that’s a nice jump forward for the app to make and, for me, it reflects the fact that WinRT libraries are much more prevalent than they were back in 2012 when I first wrote this app.

All told, this took me about 2 hours to make the transition.