I wanted to share something that happened to me today. I found that on one Windows 10 machine all of my Store apps (Weather, News, etc) would not run.

I’d run them, they’d flash onto the screen and then they’d disappear within around 2 seconds.

I tried to hunt this down and ended up in the event log looking at an error like this;

It wasn’t just mobile Excel though, it was every app.

I scratched my head.

I swore a lot.

I searched header files for that error code. I searched forums and found this but it didn’t seem to be the answer.

I wondered what it could be that would stop an app running even before it got past its splash screen and would affect every app and pondered on whether it might be something to do with my identity.

Here’s what turned out to be the problem for me. I went to the Settings->Accounts page; 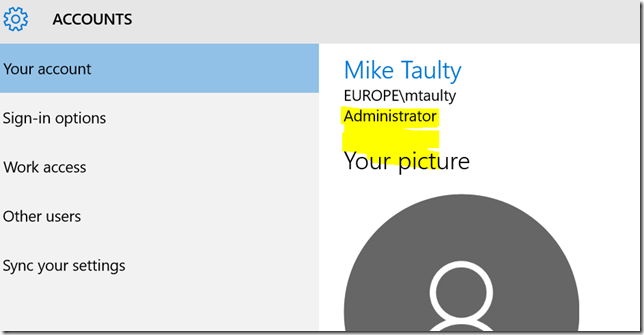 and that highlighted section had a hyperlink saying verify your identity. This machine is domain joined.

It seemed to help – that is, apps that were refusing to run started running but, at the time of writing, some apps are still refusing to run up so I’m not sure whether it’s a red-herring or not.

I can’t promise that this will fix a similar issue for you but I thought I’d share just in case it does.

Update: I’m not sure that this did fix my problem – at the time of writing, I can run Windows 10 apps but I don’t seem to be able to run any Windows 8.1 apps that came from the Store so it seemed to alleviate my problem but not completely fix it. I’ll update the post if I figure this one out.

Update 2: While working on this, I also hit this problem around error code 0x803F81F5 and having too many devices and so I removed some of my devices and then I could actually acquire something from the Store again.

Somewhere in between these two errors, I seemed to get things sorted such that I could run both Windows 10 and Windows 8.1 apps again.