in that screen capture and blog post I walked through a demo of code where I was using AllJoyn in Windows 10 across desktop/phone and IoT devices (Raspberry PI 2 in my case).

It’s a simple scenario where I cooked up an imaginary ‘lightbulb’ interface which I then implement in an app in a couple of ways;

I showed that working in the previous video and the code is all available for it on the blog post.

At the time though, what I really wanted to do was to control it with Cortana but I didn’t have Cortana working on my PC at the time that I wrote that post.

Since then, I’ve moved to Windows 10 build 10240 and I have a working Cortana (albeit after some struggles around UK/US regions and settings) and so I thought that I’d try it out with my goal being to enable this (made up) scenario;

I thought it might be a fun thing to play with and I could certainly see some future scenario of shouting at the XBOX One to turn the lights on outside or similar.

Everything I write here builds on the previous post and so I wouldn’t expect this to make any sense if you haven’t seen that post and I’m only going to write up the additional pieces here rather than run through the whole thing again.

Before I go there though, here’s a quick screencapture/video of me trying out the bits I put together;

Additions to the Existing Code

The first thing that I felt that I needed to do was to add a little more ‘functionality’ to my lightbulb interface beyond switch [on/off] and so I added a couple more simple methods;

and so now my interface encapsulates the idea of asking the lightbulb where it is located and whether it is already on/off. I then re-worked my 2 implementations of a lightbulb in order to implement these additional pieces of functionality but it’s just a small amount of extra code in each case.

Previously, I’d had the lightbulb app advertise itself with AllJoyn immediately that the app started up but, because the interface now has the idea of a location for the lightbulb I added a textbox and a button so that the location can be set before advertising; 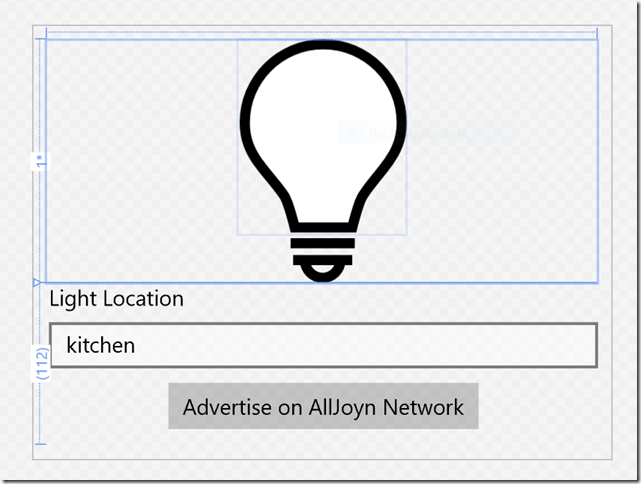 Because my Raspberry PI doesn’t usually have a keyboard plugged in, I added some IoT Core specific code to set a timer such 5 seconds after startup it will act as though the button has been pressed and will go ahead and set the location of that lightbulb to be ‘kitchen’. Cheap and cheerful!

Beyond that, I didn’t make many (or probably) any mods to the code that I’d had in the previous post acting as a lightbulb service.

In trying to do something with Cortana, I made reference to the sample on GitHub but whereas that sample shows two scenarios;

I focused entirely on (2) here and so my app is made up of 2 projects – a blank UWP app and a Windows Runtime Component to host my background task. I made the UWP app reference the component project so that the bits get copied over at build time. 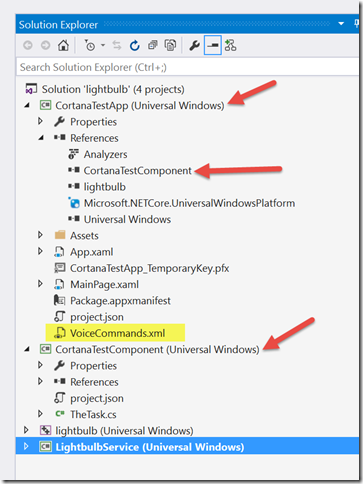 and I made sure (using the manifest editor!) that I’d specified that this app had an app service; 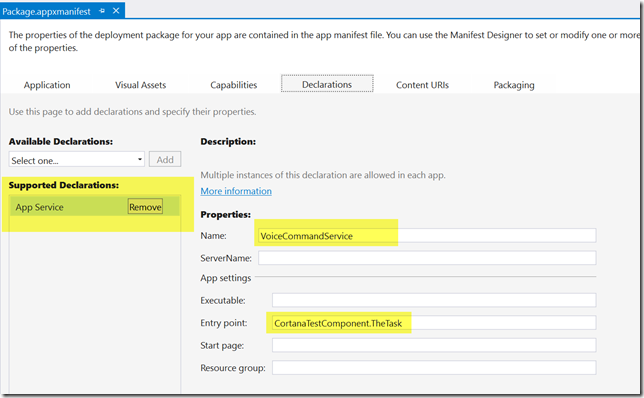 and I’ll admit that I find it very odd that for this particular type of background task there’s no need (AFAIK) to write registration code to register the background task on a trigger. It just ‘exists’.

I then just threw a button on a form and had the click handler register my voice commands;

with that in place, all of the remaining implementation lives in my background task project which proved to contain a few challenges…

Where I found writing a background task to be a bit of a challenge here is around the generated types that I seem to get from my AllJoyn interface via the alljoyncodegenerator.exe tool. What I need to do is something like;

However…the class that I get generated from the AllJoyn interface is a lightbulbWatcher class and what it knows how to do is to wait around for lightbulb services to show up on the network.

What it doesn’t seem to be particularly set up to do is to get me all of the lightbulbs that are on the network at a specific point in time.

Meanwhile, Cortana is a demanding client – she’s not going to hang around for ever while I build a list of lightbulbs.

Consequently, I went with an approach something like this;

So far, this seems to work reasonably well but I don’t know whether it’d scale to 10-100 instances of the service on a slower network.

There was another challenge in building a list of lightbulb services here – it goes something like this;

In my original implementation, I assumed that at step 3.2 above, I could get rid of the lightbulb service consumer and recreate it at step 4.2 if needed. However, I found that my attempts to do this were met with ‘you have already joined this AllJoyn session’ type errors and so in the end I keep around all the consumers from step 3.2 until step 4 is entirely finished and then I release them all.

The code for my background task then is as below;

and, clearly, some of this (particularly the message dialogs back to Cortana) could be encapsulated into some additional classes to make the code better all round but this was coded somewhat ‘on the hoof’.

I found it an interesting thing to experiment with though and I could definitely see this sort of idea being built into apps such that I can control devices around the house through home automation.

I’m fairly certain that companies like Insteon are doing work with both AllJoyn and Cortana so I’m sure it’s something that we’re going to see a lot more of.

If you want the code for all of this (warts and all!) then download from here.