I thought that I’d written some of this up before but it looks like I must have dreamt it because I can’t find the blog post that I thought I’d written and so I’ll start from scratch.

I’ve had a Raspberry PI V2 for a little while now. I bought it from RS Online;

and I also bought a little case for it as well;

and I found that they worked fine for me as did the instructions for setting up the development tools;

and I then ran through the instructions on this page to make sure that I could talk to my device via PowerShell;

and that all worked fine with the exception that I’ve yet to get the IoT Core Watcher application to do anything other than crash for me but that hasn’t stopped me deploying bits to the PI and I found it easy enough to set up remote debugging on the PI.

I took the application that I built up in this recent blog post and deployed it down to the Raspberry PI and that’s shown in this little piece of video here;

and that all works out fine although you’ll notice that in the video the array of large images doesn’t load very nicely on the PI and that’s really testament to the fact that I should be paying more attention to decoded image sizes in the my code rather than just assuming that every device the code runs on is going to have a tonne of memory to decode bitmaps. If I fixed that code, it would improve things for all platforms so that’d be a good thing to do.

With that done, I wanted to get so that I was actually controlling something on the PI and I went and bought myself a starter kit from Amazon;

and that allowed me to try and build up a simple example of switching on/off a flashing LED which seems to be fast becoming the default thing to do on these devices.

At this point, I should say that it’s a long time since I did anything even vaguely electrical and I’ve forgotten how to read values from a resistor and I’ve forgotten which end of an LED is +ve/-ve and those kinds of things and, frankly, I was never much good at those things in the first place.

Regardless. Between a combination of the little instruction book that comes with the Sunfounder kit and these great blog posts written by Paul Winstanley;

Set up the PC

and this YouTube video from Sunfounder I quickly found that I could make some kind of setup where I had a switch controlling an LED.

) as web searches for “Raspberry Pi pins” kept coming up with different images.

My little bit of electronic wizardry (ahem) looked like this; 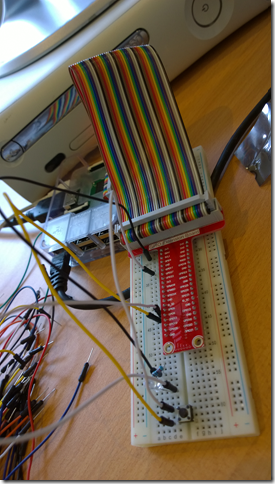 and I wrote a little bit of a UWP app with some code to attempt to flash the LED whenever someone pressed the switch and until they pressed it again to turn off the flashing light.

What I found most ‘interesting’ about this is that writing the code was fairly trivial and I did it purely by discovering the API as I went. I hadn’t attempted to read any docs or code prior to trying it out but it seemed to just follow very naturally once I’d added the extension SDK for Windows IoT.

Then again, I am only listening to an on/off value from a switch and then turning a light on and off

and so here I just have a task which spins around a loop flashing the LED on and off whenever the ManualResetEvent that it is controlled by allows it to. I also have an event handler for when the GPIO pin 6 changes value which I can then use to control that ManualResetEvent.

So, as a ‘hello world’ it’s all pretty simple and I spent more time trying to read the resistance value off my resistor than I did trying to write the code to control the input/output

As an aside, I had an additional ‘cunning plan’ for this demo which didn’t work so I’ll outline that there. I planned to;

I’m not sure that this is a very ‘real world’ scenario but I thought it might be fun to send a raw notification containing [5:Low] or similar to turn my light on/off.

However…I wasn’t entirely surprised when the constructor to a PushNotificationTrigger threw an exception at me saying “the notifications platform is not supported” and so this cunning plan has had to be sidelined for the moment.