I wanted to publicise a company-wide event that Microsoft is running at Excel, London in the week of the 10th November and, specifically, the developer part of the event which happens on the 12th November.

I own a half-day track on that developer day which I have themed around “Visual Studio for Cross Platform Apps” but that’s just one of many technical tracks across big data, DevOps, Enterprise Mobility, Cloud, IoT and more – it’s a big event with a big agenda and, importantly, it’s all free!

All the details and the registration link are behind the picture below where I’ve tried to highlight the speakers you’d see if you came along to my section of the day but take a look at the full agenda – there’s a tonne going on; 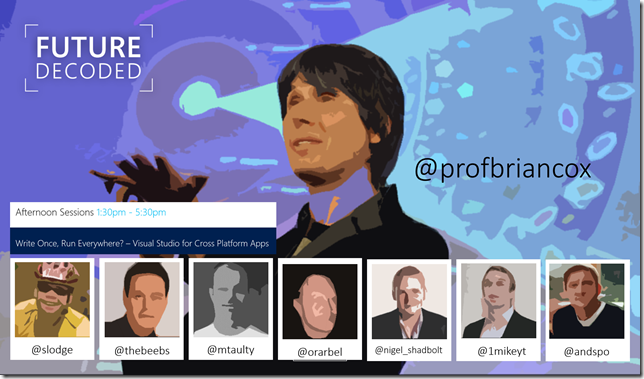 We have an afternoon of sessions across;

and I’m very lucky to be joined by the creator of MvvmCross and all round top chap Stuart Lodge to talk about Visual Studio and Xamarin;

“Let's take a tour of the tools offered by Xamarin within Visual Studio. We'll start from ‘File -> New Project –> Android’ and ‘File -> New Project –> iPhone’ and we'll explore what it takes to create an app – to build its business logic, to create a rich ui, and to talk to services like GeoLocation. This is a practical session – working with the Xamarin tools and looking at the developer workflow they enable. What's it feel like to code, design, debug, iterate and ship to Android and iOS from Visual Studio?

Xamarin's mission is to delight developers – can they delight you?”

and by my colleague Martin Beeby to talk about Visual Studio and Cordova – note that the agenda has a bug or two here which I’ve marked below with nice red crosses while the website gets fixed;

“If someone asked you to build an iOS or Android app, could you do it? What if you could do it all in JavaScript? In this session, we'll show how Apache Cordova opens the world of mobile app development to web developers. You'll learn what kind of apps are best-suited for the hybrid architecture and when to make the switch from web app to mobile app. You'll also walk away with a list of tools, tips and tricks you can use to make your first attempt at mobile app development a success.“

and then I will be talking a little around the ideas of Universal Apps for Windows/Phone from the point of view of a C# developer with this talk;

“In terms of apps, Windows/Phone have been a case of "two platforms separated by a common vendor".

That changed with the 8.1 release of the platforms which have been unified around the underlying WinRT APIs such that it's possible to build a significant portion of an app across Windows/Phone from common code without losing the ability to customise the app for a particular class of device.

In this session we'll look at what this means for C# developers in Visual Studio by looking at the options that you have for building portable C# code that can run on both Windows and Phone and some of the considerations that you need to make when building out application code that you want to have run on both.

We'll work mostly in Visual Studio rather than PowerPoint and our focus will be with C#/.NET but we will also talk briefly around other options for producing "universal" Windows/Phone apps.”

I hope to see you there!