Continuing this series of posts there’s something that I’ve been using as a tool for Kinect development which I hadn’t really mentioned on the blog here so I thought I’d bring it up and that’s “Kinect Studio”.

There’s coverage of Kinect Studio here in the Channel 9 video;

but I hadn’t really appreciated how much Kinect Studio was giving me until I’d started doing some actual development against the Kinect sensor and also until I’d carried a Kinect sensor around in my bag and started to ask the question of whether that was really necessary.

For all of these reasons and more, the folks on the Kinect SDK team have delivered both an architecture and a tool which allows for these scenarios and without which I think working with the sensor would be quite hard.

Kinect Studio is installed with the SDK. You can find it by searching Windows for Kinect; 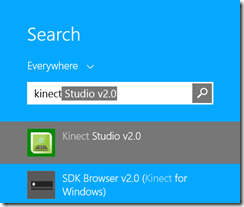 and it runs up as a Windows desktop application; 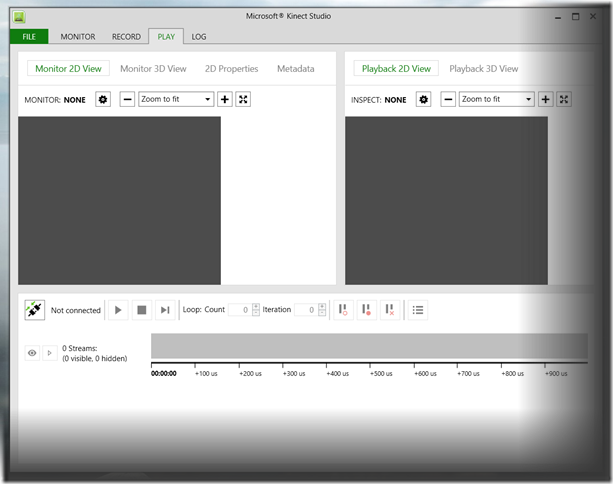 and the underlying architecture here is really important in that there’s a service running away on the machine which can receive data from a physical sensor and pass it on to client applications running on the machine but that service has a public set of APIs that allow it to send/receive data from other code for record/playback purposes.

There’s a good demo of Kinect Studio in the video that I referenced above so I thought I’d make something more specific to my own purposes here and show how I’ve used it when producing a couple of the blog posts that I’ve had on my site in recent weeks as that’s how it’s had an impact on me.

In this post I was attempting to write some WPF code which drew skeletal data in 3D and debugging that can be really tricky if you’re working along and your body is at your keyboard rather than half way across the room standing in front of the Kinect sensor.

Here’s how Kinect Studio really helps in that case;

In this post I was trying to do something a little more advanced in that I wanted to;

I’m still debugging this code right now – I don’t have it at the “working” stage in that there are a couple of notes that aren’t being detected correctly by the pitch algorithm and the Kinect Studio is really helpful in trying to debug that;

Having not come from a “Kinect for Windows V1” world, I’m not sure how much of what the Kinect Studio offers would be “expected” to a developer who’s already been doing work there although I know that there have been a bunch of improvements to the way that it works. As a newcomer with the V2 sensor and SDK I think it’s really a case of a tool that you’d have to think about building if it didn’t already exist – I tend to hit points where I realise that I need to stop getting up in front of the sensor and start recording data via the Kinect Studio if I’m going to make any process.

It’s also the mechanism via which you can record data for custom gestures, but that’s another story…