Returning back to this series of posts, I wanted to continue experimenting with the Kinect for Windows V2 SDK and to try out how I would go about collecting audio data from the sensor.

I tried to come up with something “interesting” or “semi-real” to do with the audio data rather than just to draw the angle that the Kinect thinks the beam is coming from based upon its array of microphones and the best that I could come up with was to experiment by linking the Kinect up with another little hobby of mine where I’ve been trying (not very successfully) to learn to play the diatonic harmonica.

I’m still very much a beginner with the harmonica and one of the areas where I’m still struggling is with getting decent, clean, bent notes.

If you’ve not tried a harmonica then essentially the diatonic has 10 holes with each producing 2 notes (one for blow, one for suck) but a number of holes can also produce additional notes by altering the air flow over the reeds inside the device and causing a note to “bend”.

So, I figured that I’d try and put together a simple prototype app which could help me identify whether I was producing the right note from the harmonica as I’m playing it. In doing so I wanted the app to figure out;

and I wanted all of that to work across the user entering/leaving the scene, putting the harmonica down, unplugging the sensor and plugging it back in and so on.

Here’s a little video of where I’ve got to so far in terms of the app that I knocked together. Please excuse the harmonica notes and you might notice that the highest frequency notes don’t work – I’m still trying to see if there’s anything that I can do on that;

I should add some credits for the images used in that code;

In order to get this going, I needed to capture audio from the sensor and I was very pleased to find that the mechanism for capture followed the same model as all the other APIs that I’ve used so far.

and it’s so nice to see it’s the same approach all across the API surfaces.

I needed a library to try and do pitch detection for me on a PCM stream and I managed to find this library up on CodePlex which does “auto correlation” on the audio streams it receives;

As far as I know, the Kinect produces audio data every 16ms and from testing with this library it seems to be more than fast enough to handle the sampled audio data at that frequency but I’m not sure that it’s going to produce the accuracy that I need here and the author of the library (in the discussions on CodePlex) has said that they’ve given up on it and are trying out a new approach but I found that this library gives me 95% of what I need although I need to see if I can get that last 5% somehow.

Anyway, I made a Windows Store app, built a little library out of this CodePlex code and referenced both that library and the Kinect SDK. I also decided that I’d use the Reactive Extensions here so I referenced those too; 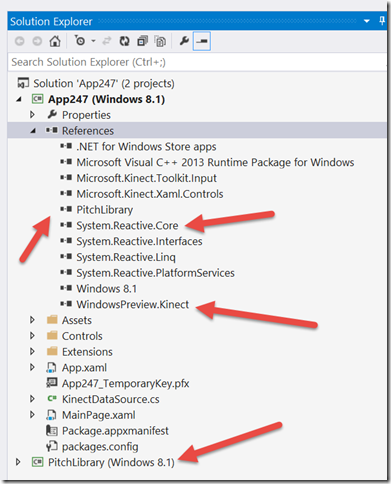 With that in place, I tried to knock up a static class which would surface some observable streams of data from the Kinect representing;

In terms of topics that I’ve covered in previous posts, the only new bit here is using the KinectSensor.AudioSource to open up a reader and then handle its FrameArrived events. In the handling of that event I try to take some care to make sure that I Dispose() of everything that I make use of because I found that, otherwise, I’d stop getting events (which seems fair to me).

That event handler tries to grab the frame of audio data from the event arguments which looks to contain 1024 samples in byte[] form which I then chop down into 256 samples in float[] form (-1 to +1) before handing them on to the pitch processing algorithm.

I then have a main UI in the some XAML which is really just 4 user controls and a little code to show/hide those controls via the Visual State Manager;

The four user controls in question are really quite simple things, typically displaying a picture and a progress wheel as this example shows; 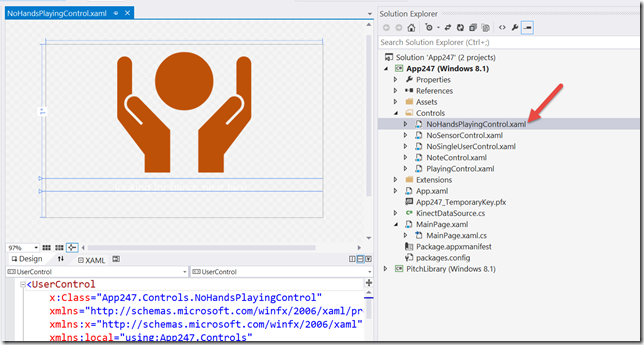 but I also built this simple control which attempts to show the note being played; 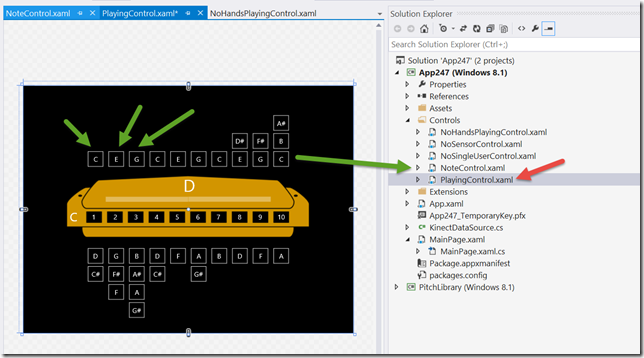 and the green squares are instances of another control called NoteControl. That control simply displays a rectangle, a piece of text to indicate the note and it can aso display a green ellipse in response to a call to methods LightOn/LightOff which show/hide the ellipse in a cheap, visual states, style manner.

The parent PlayingControl then simply has a dictionary of which of these NoteControl instances maps to each note from the pitch detection algorithm and it notifies each NoteControl to LightOn/LightOff based on which note it is passed as the currently playing note.

You can see how that works from the code below (NB: the Tag property is used as a cheap/cheerful way of storing the note that the NoteControl instance represents);

The only other thing going on in that code is that the Pitch Tracking algorithm gives me a –50 to +50 confidence value as to how well the note has been hit (midiCents in the code).

I use this to update a couple of simple progress bars as a way of trying to indicate the accuracy with which the note is being played.

For now, that’s pretty much it – there are at least a couple of problems with what I have right now;

But I had some fun playing with it and I may well revisit it. If the code’s of interest to you then it’s here for download (licensed under Ms-PL as above).