This post is really under the category of “hacking for fun”. I wanted to knock up a quick demo for a talk about Windows 8.1 apps and I wanted to show that it’s possible to connect to interesting bits of kit from an app and the 2 of the “interesting” bits of kit that I came up with where;

I had a few people asking me how that was put together and so I thought I’d blog that here in the manner of a “Recipe” where I’ll try and keep the code/HTML as short as possible to reproduce what I showed at the recent “Native Summit” event.

You’re going to need a Sphero. I got mine from Amazon and I’ve linked the image below to them. Other online stores are available. 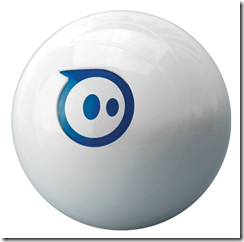 You’re also going to be needing a Kinect for Windows V2 sensor. I got mine from Andrew at work. He’s not likely to be able to get you one so I think you’d need to buy one. I’ve hyperlinked to the UK Microsoft Store from the image below;

I’m not 100% sure whether other stores are available on this one.

Step 3 – Get a Dev Environment for Windows 8.1 Apps Set Up

You’re going to need somewhere to run Visual Studio 2013 on Windows 8.1. This is most likely going to be a PC but I suspect it can also be a Mac whether running Windows virtualised or dual-booted but I should say that I haven’t tried working with Kinect and Sphero on anything other than my Dell XPS 13.

The best plan to go get bits is probably to follow the “Get Set Up” link below;

Once you’ve got your Sphero charged up and have it switched on ( double-tap ) you need to pair it up with Windows so you go to your bluetooth device settings;

and pair it up. I didn’t really have any challenges in getting that done – I think it stumbled a bit on the first attempt but worked 2nd time around for me and has stayed working since.

The chances are that if the Sphero app in the Windows Store doesn’t work for you then your own code isn’t likely to so go grab that app by clicking on the image below; 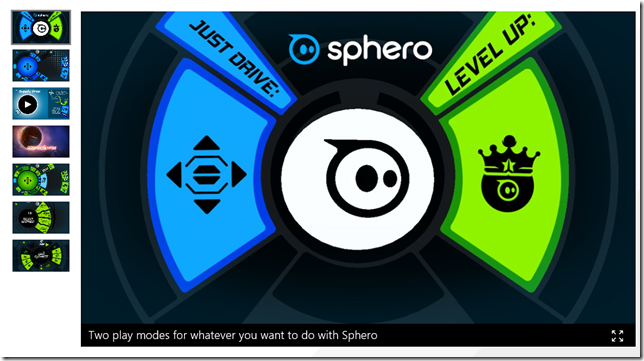 and give that a quick try.

Step 6 – Get the Kinect SDK

You’re also going to need the Kinect for Windows V2 SDK so go and download that and install it – linked from the picture below;

Step 7 – Get the Robotkit Library

I also made use of the Robotkit library. There’s possibly another or a better way of doing this but it’s the direction that I took. You can download that by going up to the official Sphero developer centre;

and then finding your way across to this github project;

and in there you’ll find Robotkit.dll which is a .NET library that you can make use of.

You’ll also find some other bits and pieces that you might also find useful in the sample there.

The demo that I showed was written in JavaScript so I’ll try and produce a minimalistic version of that here. The Robotkit.dll library is in .NET so I need to wrap something around it to turn it into a WinRT component that can be used from JavaScript. 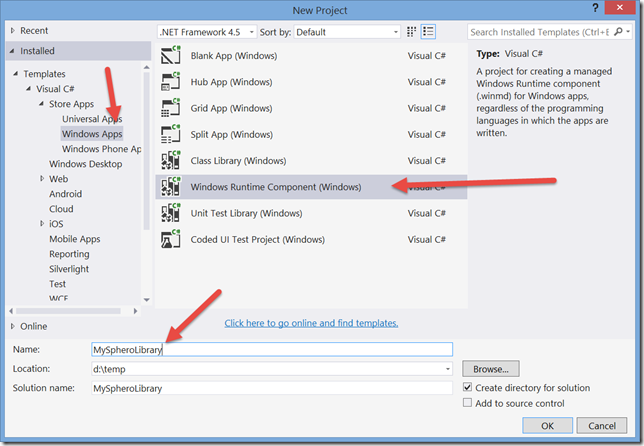 and then add a reference to that Robotkit.dll that I got from the Sphero github project; 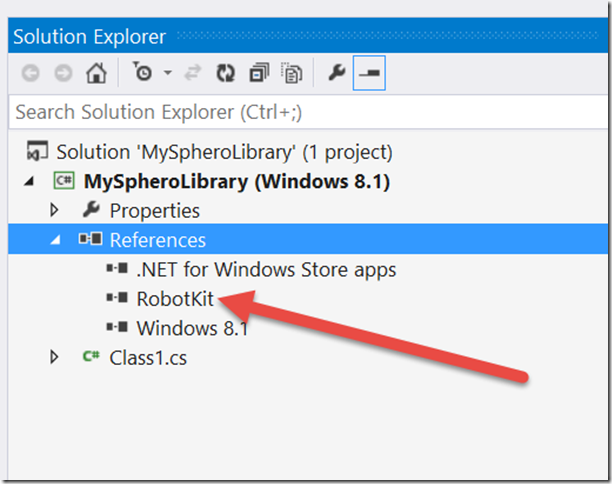 and then I just wrote a little class called SpheroControl which offered up some of the functionality that’s within that Robotkit library in as simple, short a way as I could;

Now, this was put together pretty quickly and I guess the most “tricky” part of it is the bit that’s trying to get hold of the first Sphero device that it can find connected and that’s mostly a bit “tricky” because I chose to inline a bunch of event handlers and I have to try and cope with adding/removing them. There’s no error handling in there as you’d spot.

However, with that in place I can now create a Windows 8.1 project in JavaScript and make use of it so it’s back to Solution->Add->New Project; 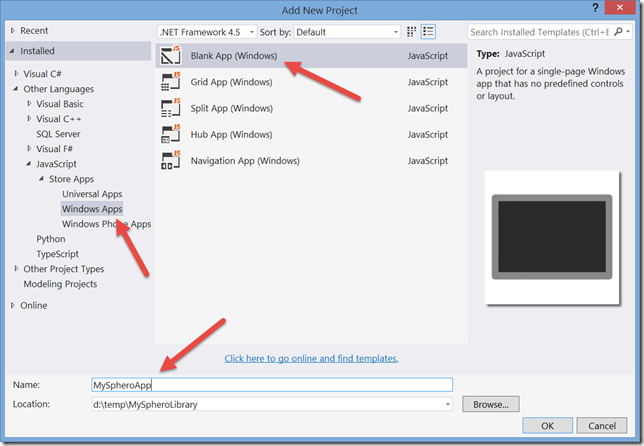 and inside of that JavaScript project I need to reference both the MySpheroLibrary project that I’ve just made and the Kinect SDK. 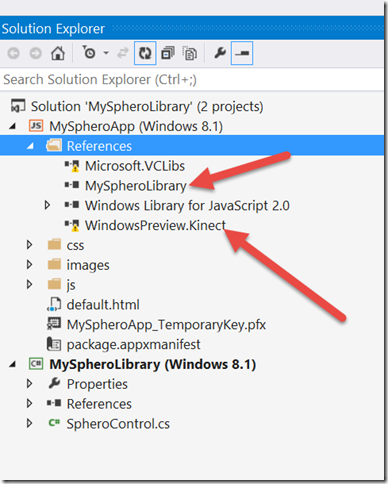 The Kinect SDK involves native code so I need to choose a processor architecture to work with and so I can just open up the “Configuration Manager” and switch it to (e.g.) x64; 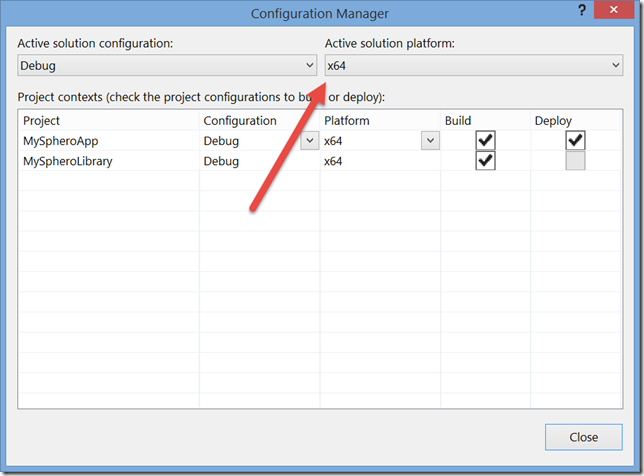 this always feels a little “weird” to me when it comes to working in JavaScript but if we take a dependency on underlying native code then it’s got to be done as that native code has to be built for a processor architecture.

The other thing I need to do is to tweak my application manifest. I need to set up; 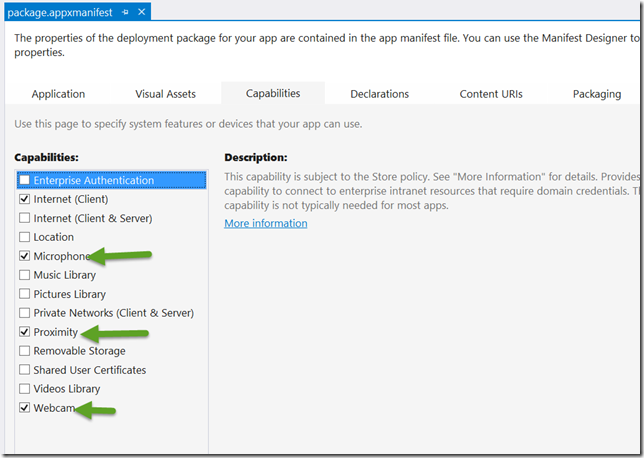 and I also need to open up the manifest as an XML file and make sure that I’ve got (taken from the sample I think);

From there, I could pretty much leave my UI alone. The blank project template will give me this;

and that’s fine. It’s worth saying that there’s absolutely no need to use WinJS here, I’m just leaving it in place as I’m not planning to display any UI at all here in the interests of keeping things short.

The blank template also adds a bunch of code which I would strip down to this;

and then there’s a need to write those 2 initialisation functions and a few helper functions to wire things together. I cooked this up in a different form without any UI and it ended up looking as below;

and that’s all there is to the very basics of it – you could then add some UI and call more functions and error handling and so on and so forth but it works reasonably well for me.

That code’s here for download if you want to take it as it is.