I’ve been writing these posts about my beginner’s experiments with the Kinect for Windows V2 SDK;

with reference to the official materials up on Channel 9;

I realised that I hadn’t done anything with;

I also realised that I hadn’t tried to do anything where I link together multiple data sources to produce some kind of combined view.

I figured that what I could do is take the IR data and display it but correlate it with the body index data to remove any values that didn’t relate to a tracked body (this is far from an original idea – there’s samples like this everywhere although they sometimes use the colour video frames rather than the infra-red frames).

I stuck with using a bit of the reactive extensions as per my previous post and started off with a little WPF UI to display 2 images; 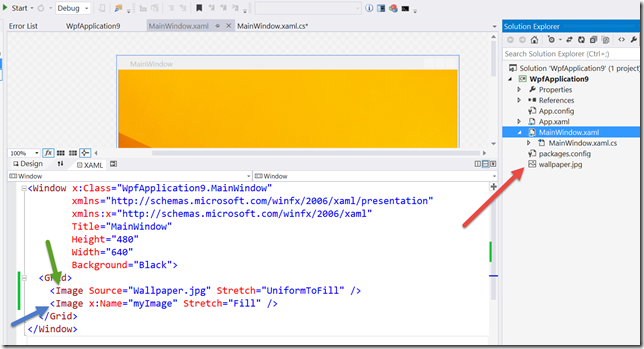 Simple enough stuff – a wallpaper image underneath another image that I have named myImage. From there, I wrote some code to run when the UI has finished loading;

I’m hoping that this is a fairly “logical” structure. First off, I open up the sensor which I keep around in a member variable;

and then I try and figure out what the dimensions are on the frames that I’m planning to deal with – the body index frames and the infra-red frames and I keep a few things around in member variables again;

and then I create a WriteableBitmap which can be the source for the Image named myImage in my UI;

and then finally I attempt to create an observable sequence of frames of data which contain both the infra-red frame and the body index frame. To do that, I made a simple class to hold both arrays of data;

and then I attempted to make an observable sequence of these;

That’s quite a long bit of code

As in my previous post, I’ve taken the decision to allocate arrays for each frame that I get off the sensor and “live with the consequences” which (so far) has worked out fine running on my meaty i7 laptop with lots of RAM. I’m actually hoping that the GC mostly deals with it for me given how short the lifetime of these arrays is going to be.

So, effectively, this is just trying to use a MultiSourceFrameReader to bring back frames from both the Infrared and BodyIndex data sources at the same time. Where both of those frames can be acquired, this code produces a new instance of my FrameData class with the members IrBits and BiBits containing copies of the data that was present in those frames.

It looks a bit “wordy” but that’s what the intention is and most of the code is really there just to make sure that the code is acquiring the 2 frames that I’m asking the sensor for so it’s a couple of AcquireFrame() calls plus some null reference checks.

Once that observable sequence is set up, it gets stored into a member variable and then I consume it from that OnLoaded() method (in the first code sample above) and that, essentially, is routing the captured frame data through to a method called CopyFrameDataToBitmap which looks like;

this is making reference to a little static array of colour-based bitmasks;

and, essentially, this code is building up the 2D image from the captured frame data by on a per-pixel basis by;

and that’s pretty much it. What I really like with respect to this code is that the SDK makes it easy to acquire data from multiple sources using the same pattern as acquiring data from one source – i.e. via the MultiSourceFrameReader and I don’t have to manually do the work myself.

The sort of output that I get from this code looks something like; 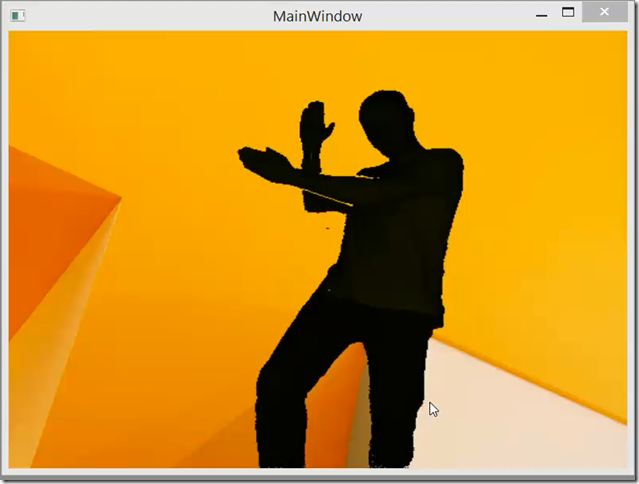 when I’m a little more distant from the sensor and perhaps a bit more like; 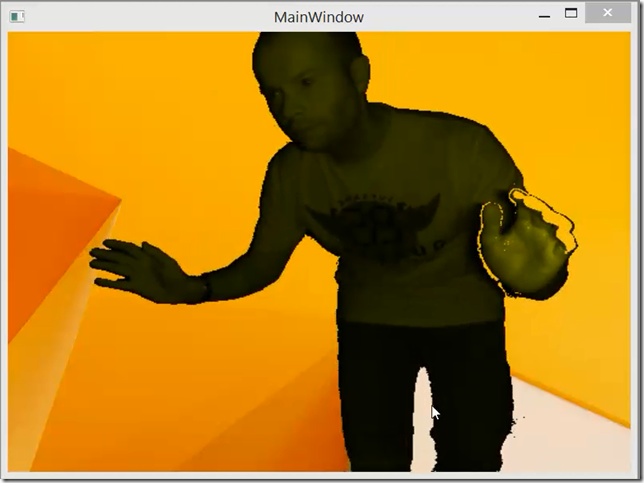 for a case where I’m nearer to the sensor and it looks like in this particular case the infrared data is being drawn in yellow.

Again, I’m impressed with the SDK in terms of how it makes this kind of capture relatively easy – if you want the code from this post then it’s here for download. For me, I’ve taken brief looks at getting hold of;

data from the sensor. I also want to dig into some other bits and pieces and my next step would be to look into some of the controls that the Kinect SDK comes with and how they can be used to “Kinectify” a user interface…