In this post about dealing with the differences across Windows/Phone 8.1, I finished up with some pieces about the differences between the FileOpenPicker (and the FileSavePicker) on Windows Phone 8.1 versus Windows 8.1.

There are other APIs like this in the Windows RT framework – collectively they are known as the “AndContinue” methods and this blog post by Bret talks more about them;

As the post says – there are APIs in WinRT which are async and where the expectation is that there is enough memory on the device in order to keep the app running while the API performs its work and then gathers some result and returns it back to the calling application (think of the FileOpenPicker example).

On the Windows Phone, the memory required to perform the operation (like file picking) might not be available on the device and so these “AndContinue” APIs all cause the application to be suspended while the API does its work and it’s possible that the app will be terminated by the OS in order for that work to be completed. This is something that I don’t think ever happens on Windows 8.1 – i.e. you call an API which may cause the OS to terminate your app. Generally, on Windows 8.1 the OS terminates your app only after the user has switched away from it and it has already been suspended (after around 8 seconds).

In that previous blog post, I had some code that tried to abstract around these differences by using shared compilation whereas I recently showed the same sort of thing in a couple of conference sessions where I did things differently and so I thought I would share that here as a follow up.

I built two very, very simple Windows/Phone apps which just show the FileOpenPicker and to pick an image file which is then displayed on the screen. Here’s the Windows version in “action”; 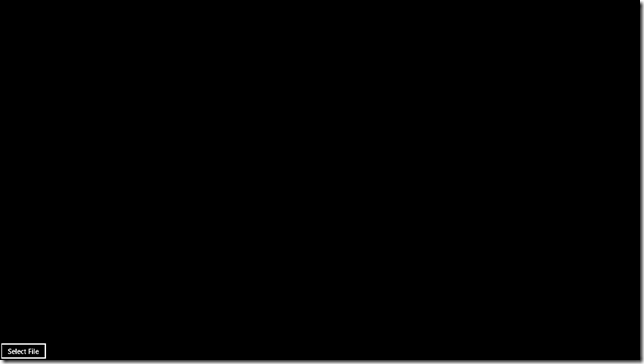 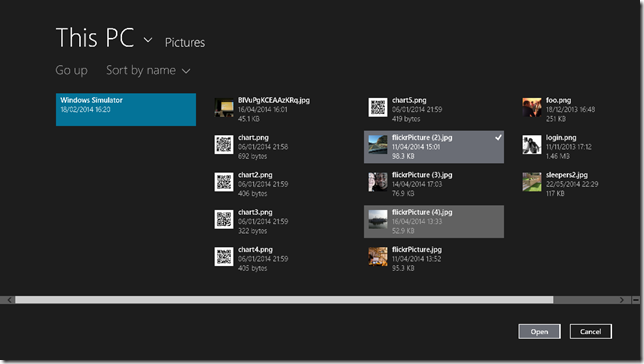 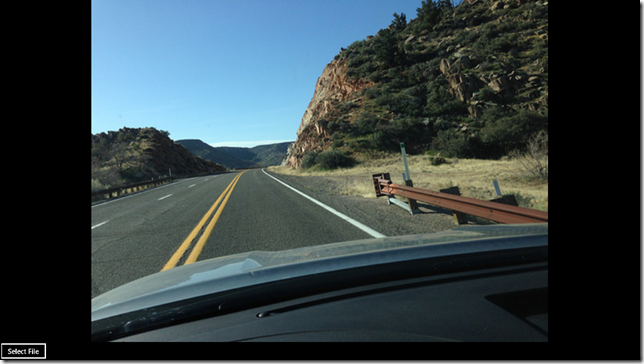 and here’s the Windows Phone version in action; 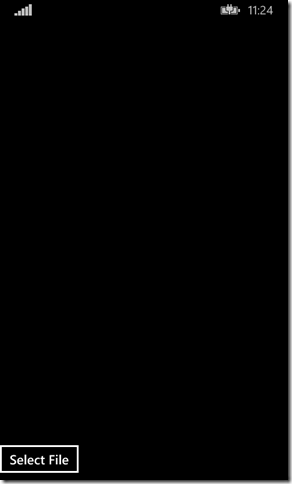 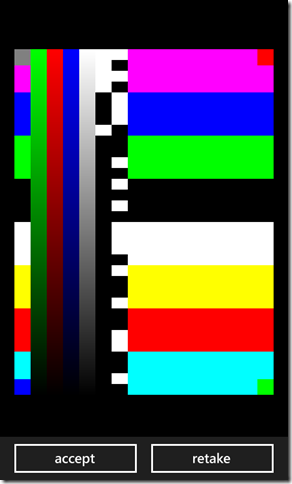 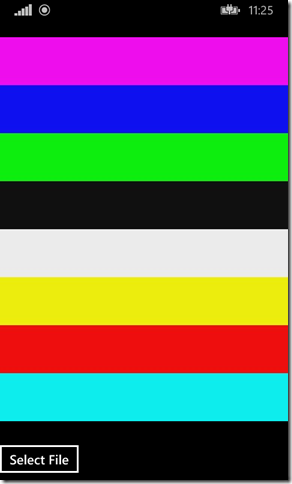 As described, the difference between the 2 applications is that on clicking the “Select File” button in Windows Phone, the app will be immediately suspended and may be terminated and in that case it would need re-running when the FileOpenPicker returns a file – hence the AndContinue naming on the API.

In order to abstract the difference between Windows/Phone I think any abstraction interface has to deal with 3 scenarios;

In order to achieve this in an abstracted way, I can’t think of avoiding a requirement to have the abstraction Initialise itself in some way when the application starts up such that it can be in the right “place” to handle the Activated event should it need to, hence I ended up with an interface that looks like this;

I built that into a portable class library along with some other pieces and for my simple demo I paid no real consideration to the suspend/terminate state management that a real app would need to do but built on 6 different projects as below;

The Windows library contains a Windows specific implementation of the IFileSelectionService interface shown above and the Windows Phone library contains a Windows Phone specific implementation. I have nothing in the Windows/Phone application projects themselves other than the standard bitmaps and application manifests as you can see below – everything else I use here is either in libraries or the shared folder. 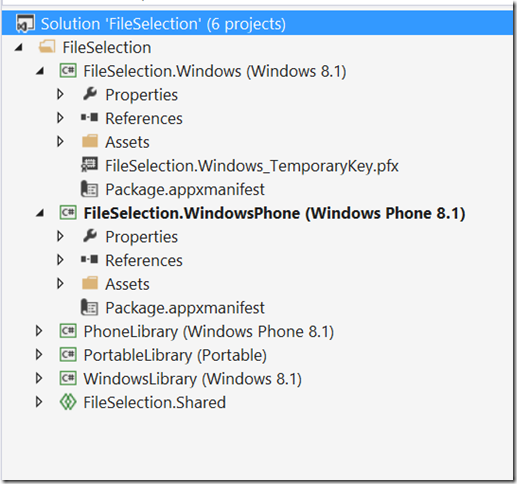 There’s then a MainPage.xaml(.cs) which has some XAML to display the “UI” and that XAML is setting the DataContext to a property on the ViewModelLocator called ViewModel and there’s then bindings to two properties called UserImage and SelectImageCommand;

the code-behind this XAML file uses a cheap/cheerful trick that I use from time to time when I need an easy way of calling some initialisation code on a DataContext;

and so as this page is NavigatedTo it will take a look at its DataContext (which never changes in my case) and if that context supports IDataContextInitialise it will call an Initialise() method on it. This becomes important at a later stage in the app because it’s the way in which the view model will attempt to retrieve a file in the circumstance where the app has been terminated and restarted.

and it contains the ViewModelLocator class that I used in App.xaml;

This is pretty simple – it has that one property called ViewModel (referenced from MainPage.xaml) which uses an Autofac IoC container to resolve the MainViewModel. The Initialise<T> function which we’ve already seen called in App.xaml.cs creates the container by trying to instantiate the IFileSelectionService type it is given, calling Initialise() on that service (which is also going to be important) and then registering a single initialised instance in the container.

The MainViewModel class is also in the portable class library and, as you might expect, it has a dependency on the IFileSelectionService which the container is going to resolve for it. It’s as below;

and so the crucial thing here is that this class has been built around the IFileSelectionService abstraction interface. In the OnSelectImageCommand() function, it asks the file selection service to display a FileOpenPicker and it attempts to await that call for the StorageFile result. Sometimes this will happen. Othertimes, on Windows Phone 8.1, this code may never run because the process is terminated and re-started.

That scenario is why this ViewModel has an Initialise() function. That function calls IFileSelectionService.GetAndClearLastPickedFile() to ask the file selection service whether (at app startup) it has gathered a StorageFile handed to it when the app has been restarted by the OS and so can deliver it as soon as the MainViewModel is created. This will never happen on Windows 8.1 but may happen on Windows Phone 8.1.

In my Windows library project (only referenced by my Windows app project) I have the implementation of IFileSelectionService for Windows 8.1. In this simple demo, this is simple code;

and so this code is simply delegating down to the ability already present on the FileOpenPicker via PickSingleFileAsync.

In my Phone library project (only referenced by my Phone app project) I have the implementation of IFileSelectionService for Windows Phone 8.1. In this simple demo code I tried to implementation that abstraction;

Firstly, the Initialise() method is important because it handles the CoreApplicationView.Activated event to look for activation events which are a continuation of a FileOpenPicker operation. This can happen 2 ways;

The DisplayPickerAsync method tries to use a TaskCompletionSource to put an async facade over the top of scenario (1) above and for scenario (2) as long as the Initialise() method is called early enough in the app’s lifecycle the Activated event will be handled, the StorageFile will be retrieved and stored such that a caller can pick it up via the GetAndClearLastPickedFile() method.

This is just demo code, lacking exception handling and so on and possibly there’s a few bugs lurking around in there too but I thought I’d share this “tidied” version of what I talked about in that previous blog post.

The code’s here for download if you want to look at it in it’s entirety rather than in the pieces above. If you want to debug it then the process to follow for Phone is; 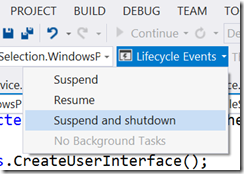 and you can play around with some breakpoints to see how that file arrives and gets displayed in the page.