I have a vague, nagging idea for an app to run on the Phone but the app needs to know the user’s location.

It’s not the type of app that needs to know the location on a blow-by-blow basis. It’s not like a jogging-tracker type app or that kind of thing but the app will need to know the user’s location as the user is mobile rather than waiting until they actually use the app and then trying to figure out where they are.

In simple terms – I might want to have a live tile for the app with the user’s current location displayed on it. It doesn’t need to be 100% accurate 100% of the time but it needs to be “mostly right”.

Windows Phone 8.0 has support for the type of application that constantly monitors the device’s location;

Running location-tracking apps in the background for Windows Phone 8

and the support is specifically about location tracking apps in that an app using this mechanism can only do certain things in the background.

But, Windows/Phone 8.1 introduce the much more general approach to background working of having background tasks which are fired by triggers with a task running in the application’s context (i.e. able to get to the app’s files, settings, etc.) and triggers supporting many scenarios (e.g. internet connection available) including location based triggers which, today, are tied to geo-fences.

If you want to see more on background tasks on Windows Phone 8.1, you can watch this session from //Build;

and if you’re interested in geo-fencing on the Phone you can watch this one;

I’ve experimented with the geo-fencing APIs before on Windows 8.1 without massive success with my main challenge being one of trying to simulate (via the Windows 8.1 simulator) location because working with location is really difficult if you don’t have a great way of simulating where the device is.

With the arrival of Windows Phone 8.1 I wanted to think about this idea of my app that “tracks location” another time and see if I could get something started on it.

Realising that I can’t take the “continuous tracking” approach of Windows Phone 8.0 and, also, realising that I really don’t need it I wondered whether I could make use of geo-fencing to achieve what I wanted and this led me to the idea of…

Ok, I made that term up. I daresay someone else made it up before me but I haven’t web searched for it to check. The basic idea of the “rolling geofence” is to;

and with Windows/Phone 8.1 supporting circular geofences that means that if a user is at some Lat,Lon and my app creates a fence of some radius R then I’d hope that when they move a distance of R I get a chance to put a new circle around them centred at their new location with ( if the timing was right ) the circumference of that circle touching their original position.

Now, I know that on the phone I’m possibly not going to get my geofence events when they happen – in Windows Phone if my background task was to cause multiple geofence events one after the other then they would be coalesced and delivered only every 2 minutes (watch the second video above at the 52 minute mark for details).

For my app, that perhaps doesn’t matter too much – if I was to use a 1km radius to try and track where the device is then I guess I might start to miss individual events at the point where the device was travelling more than 500m in 2 minutes or 15km/hour but as long as those events are delivered at least every 2 minutes I’m not really going to get too much out of sync with where the user is and I could always use a wider geofence to try and minimise the impact of this.

I made a little WinRT component project and added a few classes to it;

and so this RollingGeofence class is a big static class which has most of the functionality that I’ve built here. The public interface is much simpler essentially comprising;

and that’s it. That class is supported by the background task implementation itself;

and this task is simply handing over the responsibility for checking the GeofenceStateChangeReport entries received to the RollingGeofence class.

Then there’s 2 other small classes;

Just to step back into that code a little – the essence of the previous code is in the RollingGeofence and RollingGeofenceBackgroundTask classes and is something like;

Any time we obtain the current location we log it into a file and that file can be read (in a slightly abstracted way) via the public API of RollingGeofence.

Setting up a Host Project

I need some “app” project to try this code out and so I made a Windows Phone 8.1 project, referenced by RollingGeofence component and wrote a tiny piece of UI; 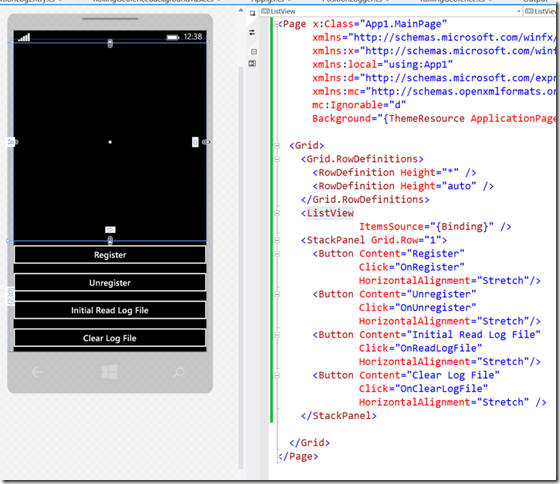 and that marries up with a small amount of code-behind to try things out;

the other thing that needs setting up is a manifest. At this point I get into a philosophical debate. The component that I’ve written is trying (in as much as possible) to abstract the details of background tasks from any calling app. However, in order to register a background task and to obtain the user’s location the app itself is going to have to have a manifest that allows for those 2 things. I almost feel like there’s a need for a “component manifest” where I could specify these things without troubling any developer that wanted to use my component but, there isn’t, and so I alter the manifest file; 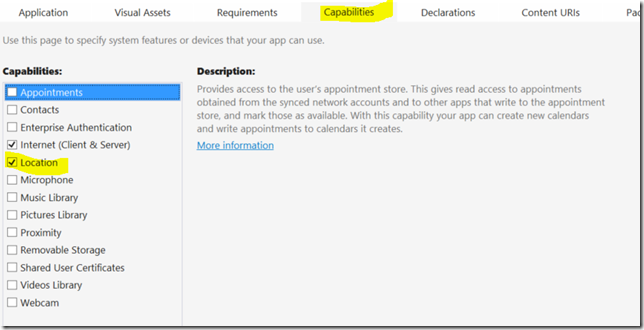 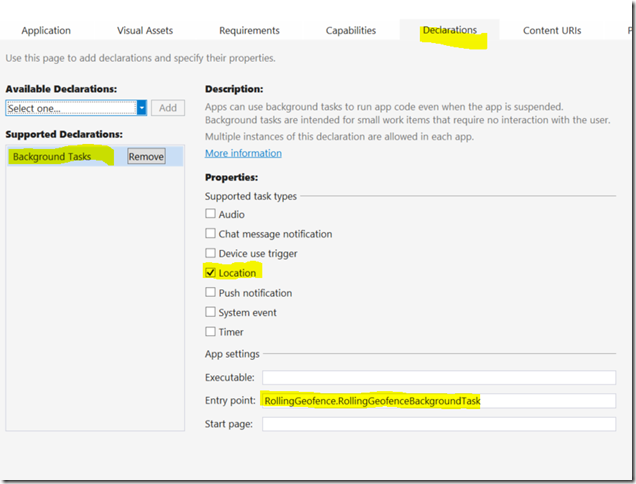 This is where things get a little “hairy”. I’d prefer to try this code out initially on the emulator rather than having to put it onto my phone and drive around a lot with the phone to see what happens

However, I’m not entirely sure that I understand how to best use the emulator to test out geofencing and I find that my experiments are a bit hit and miss. What I can say is that I seem to have found a way to make things work reliably but that’s been more by luck than by judgement to date. I specifically think that the geofencing service has quite a lot of smarts and the sort of tricks I might use in the emulator to test it are actually being filtered out by its algorithms when (e.g.) it sees the device suddenly travel 100km in a short period of time. 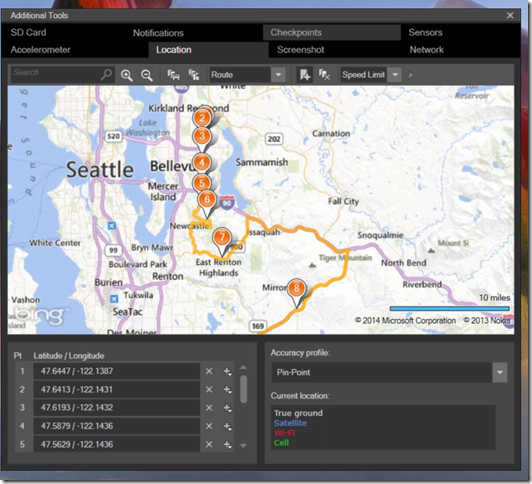 and that seems to work reasonably well and here’s a picture of the app as it has recorded 3 changes in location as the device travels down the road; 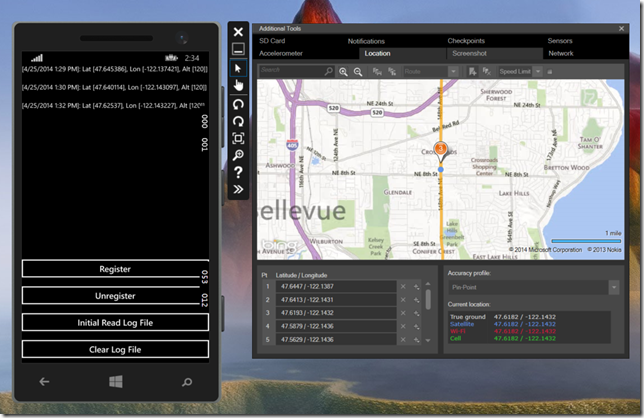 however, I found that my notifications stopped for quite a while after the 3rd one leaving a 16 minute gap where I didn’t received any geofence notifications.

At first, I thought I’d hit a bug where my code had failed to register the “next” geofence but that can’t have been the case because I did get a subsequent notification around 16 minutes later and then things were a little sporadic again for the next few miles of the route.

It seems to hold up a little running in the emulator so I’ll install it to my phone and see to what extent it tracks me there (and whether I notice my battery life dropping) over the next couple of days.

The main thing that worries me with the approach that I’ve used here of;

is that if something goes wrong in the sequence then the next geofence might not get set up and the whole “chain” will stop. I could possibly try and mitigate that a little by (e.g.) having another background task like a time or maintenance trigger which periodically tried to make sure that my fence was in place. I might look into that as an additional thing to try.

Having run this code on my phone for a week or so I can certainly say that it doesn’t quite work properly. What I’ve found so far is that I do get notifications as I change location but there’s a couple of problems;