I’d recommend reading that post before launching into this one and all the caveats that I applied to that post also apply here.

Having written a little in that previous post around where I think “we are” with respect to Windows 8.1/Windows Phone 8.0 and developing code for both of those platforms, what does Windows Phone 8.1 bring?

With Windows/Phone 8.1 there’s much more convergence than before. In my own head I see this a convergence around “WinRT” as the underlying platform APIs/runtime but that’s maybe an over-simplified view;

What I’m trying to say with that picture is that WinRT is a bigger set of APIs for a Windows Phone 8.1 app than it was in Windows Phone 8.0 and, at a high level, I think you could view it as being “the same set of WinRT APIs that a Windows 8.1 developer has available” although that’s not entirely true when it comes to the detail – the Angels are always in the detail

Thinking from an apps (not games) perspective, I think it’s fair to represent both Windows/Phone 8.1 platforms with the diagram below;

This is the exact same diagram that I drew for the Windows 8.1 platform in the previous post (with different colours

The variant of XAML on both Windows and Phone is now the same. That means that;

It’s also important to note that the subset of .NET that’s presented to both Windows/Phone 8.1 platforms is the same subset of .NET so common code can sit on a common substrate.

Windows Phone 8.1 is backwardly compatible – apps and games from previous operating system versions will continue to run and that developers who have an existing Silverlight Phone application targeting 8.0 do not have to leap to “Windows XAML” in order to build for Windows Phone 8.1.

It’s possible to take that existing Silverlight application and re-target it to run on the 8.1 runtime which gives the Silverlight 8.1 app a platform something like the picture below;

Going back to the discussion in the previous post about “Phones are different”, the platform convergence above is not about building one app package/binary that will then install and run across Windows/Phone.

A developer who’s building for both Windows/Phone 8.1 on the new platform will still build 2 apps and submit them into Store with separate application manifests although there are capabilities within the Store to link those applications together from the user’s perspective if the developer chooses to do so.

However, the possibility for sharing code between those two apps becomes much greater with Windows Phone 8.1 than it has been to date. From a XAML developer’s point of view; 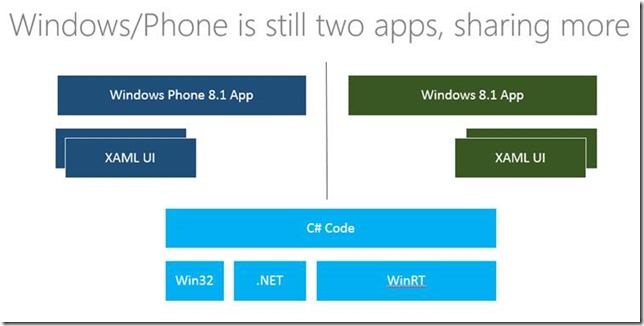 This means that the traditional “problem” of not being able to build portable class libraries that make calls to the underlying platform goes away – it’s possible for code built into a PCL to make use of WinRT to access the file system, the camera, the network and so on as those same WinRT APIs are available on both Windows/Phone.

Common XAML – What Does it Mean?

In terms of “XAML” for Windows/Phone 8.1, the XAML language variant is in place for both platforms as is the same runtime used to render that XAML and as are the same libraries which provide “XAML functionality” to your code. For the first time in a long time, “a Button is a Button is a Button”.

As you’d expect, there is some subtlety here. If we think about the sort of controls that make up a XAML UI; 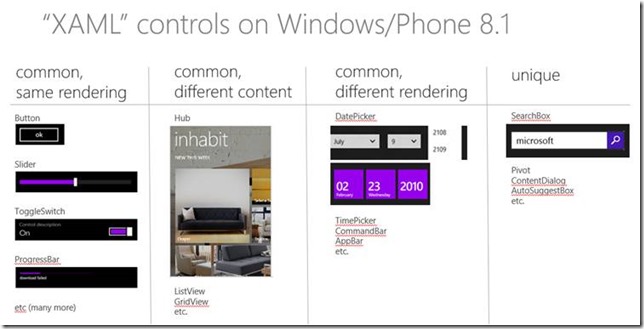 Update: Since watching some of the //Build breakout sessions I know that diagram above isn’t quite right in at least one way. The controls like Hub/ListView at least should perhaps really sit in the “common, different rendering” column because I learned that they do some make some adaptations for Windows/Phone platforms.

I’ve partitioned those controls into 4 categories as in the diagram above;

There are some differences here but they are in the minority and the main differences are going to be in how the controls are used more than anything else.

Common WinRT – What Does It Mean?

Much like what’s happening with XAML, when it comes to WinRT there’s a much larger shared API set across Windows/Phone 8.1; 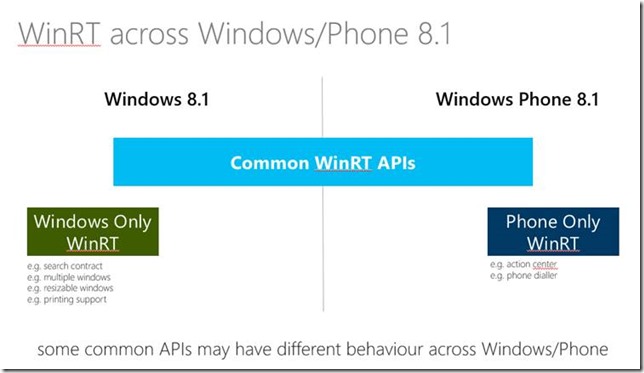 Lots of APIs are going to be common and this has impact on how a developer writes their code. A Windows Phone developer is going to notice more changes than a Windows 8 developer. For example, in areas such as these examples; 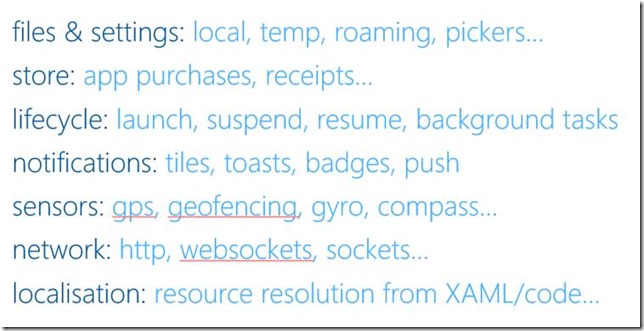 As the picture above suggests though there are going to be some APIs that are still platform specific. For example;

The Windows/Phone 8.1 platforms are far more greatly unified than in the past. Windows Phone 8.1 supports a number of different ways of building an 8.1 app;

And that’s not including the options around building games with DX.

For a XAML developer, the XAML variants used across Windows/Phone 8.1 are the same and the underlying .NET/WinRT APIs are greatly unified which should make for a much easier life in trying to target both platforms.

In the next post, I’ll spin up a “Universal” app project in Visual Studio and look at how that makes use of the new “sharing” folder.