Sometimes I feel like I’m banging the same old drum

but at the risk of repeating myself…

I have an application in the Windows 8.1 Store. It’s called kwiQR. It’s a QR code scanner. Here it is running on a few devices I happen to have around; 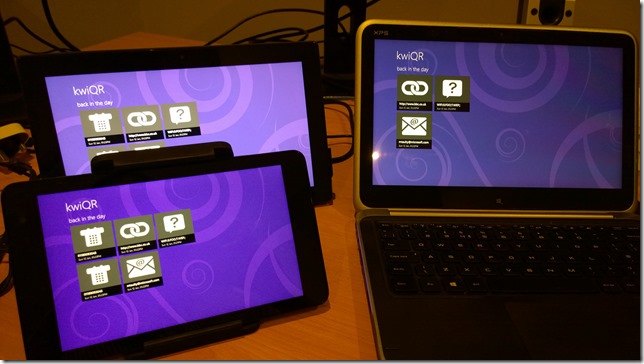 I built that app once. In the picture the app is running on 3 devices;

The app runs nicely on all of those devices. It’ll run on any device that’s running Windows 8/8.1.

It needs a camera so it does “device detection” to figure out how many cameras the device has and where they are located.

That’s all part of the WinRT platform that the app is built upon ( in C# and .NET  ).

The app also seamlessly syncs data for a specific user from one device to another such that a user can have a common view of the app across their devices (if they want to). Again, that’s part of WinRT and is done for free and pretty much transparently by the platform via OneDrive.

Why call any of this out? I frequently meet up with developers who are thinking in terms of;

and the reality is that’s not really what a developer does with Windows 8/8.1.

A developer builds an app for all the devices that Windows 8/8.1 runs on which is a much broader set of devices than tablets.

This matters because if you were to look at the Gartner data then there were around 180 million tablets shipped in 2013. I don’t think it’s contentious to say that most of those devices were running something other than Windows.

But…the key point is that my app is not purely targeting tablets. It’s targeting a much, much larger set of devices – the entire installed base of Windows 8/8.1 devices out there – those already in market and whatever portion of that new 300+ million devices that went out of the door with Windows 8/8.1 on them in 2013.

For me, that’s why it’s important to get the idea that these kinds of apps aren’t “tablet only”.

Now, in an ideal world I’d be able to also include a Windows Phone version of the app in that picture above and target more devices. While it’s perfectly possible to do that today, it takes a bit of work ( see my “building for both” talk here ) that I didn’t put into this app just yet.

However, in the future, I’m hoping that the publicly stated unification efforts will make that easier.

That would make the potential larger still.