A second app that I have in the Windows 8.0 store is the kwiQR app which is a QR code scanner. I thought that I’d migrate this app to Windows 8.1 as well while I’m away from work and see how common the experience was between migrating the Tile A File app and this app.

The first thing I did was to create a branch off main in TFS so that I could have a Windows8.0 code base to go back to and fix bugs in should I want to maintain that Windows 8.0 code in the future.

The next thing was to retarget the projects to Windows 8.1. The kwiQR app is built out of 2 projects;

with one being a variant of the Zebra Crossing library for QR codes that Google builds. I’m not 100% sure I can trace which variant of Zebra Crossing this library is but, regardless, it’s here as a pure .NET library that my main application uses.

I retargeted those two projects to Windows 8.1 and the only minor problem that I hit was that the app has a dependency on Callisto; 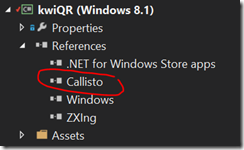 With that done, I managed to get a successful compilation but I hit quite a lot of deprecated code. This isn’t a very big code base but I hit;

Ok – so in short this sounds to me like 3 things – snapped views, creating secondary tiles and the share contract. Looks like I have a little bit of work to do there.

On the SettingsFlyout I also found that I needed to set the Background color of the flyout and also its RequestedTheme in order to get it to line up with the way that the Callisto version of the SettingsFlyout used to work. Other than that, settings seemed to be resolved.

It didn’t seem that I’d been quite as lazy with this kwiQR app in terms of providing scaled logos at the point when I’d built the application package but, as you’d expect, because Windows 8.1 introduces the new 70×70 and 310×310 tile sizes I didn’t have specific imagery in my project to cope with that.

and nor did I have all the right imagery to deal with the small 30×30 logo at its 4 target sizes; 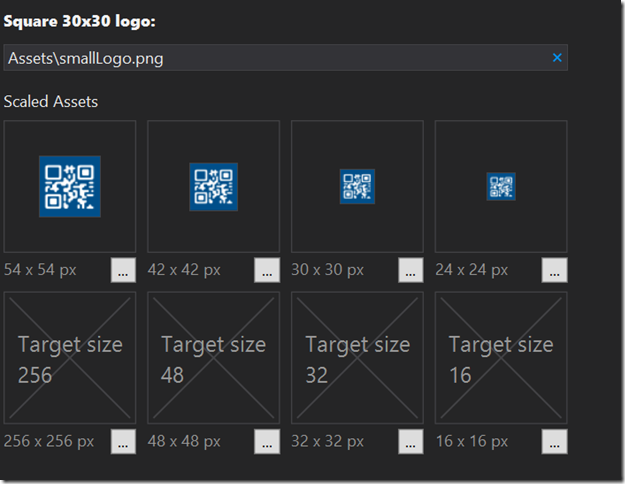 The idea of kwiQR is that the user can scan a QR code which might contain a web URL, a telephone number, an email address, a contact card and then they can “action” that scanned content either immediately or at a later point. For example, “actioning” might mean launching a web browser to view a web URL or launching an email client to email the address from the code.

To help with this the app did support a snapped view which felt like a useful thing to have in that the app can be positioned on the left hand side of the screen and then used to “launch” multiple pieces of content.

Unlike the previous Tile-A-File app then I wanted to preserve this idea of a snapped view for kwiQR and so I set the minimum app size down to 320px.

This “sort of works” in that for a page like the application’s main page I have the regular view which is GridView based;

and then if I size that down to 320px then the old Windows 8.0 APIs are still doing their thing and my UI changes to be more ListView based;

However, I need to move away from the APIs that the app is currently using to drive these state transitions and this app is different from the Tile-A-File app in that I made use of the LayoutAwarePage base class which used to ship in the Windows 8.0 templates. There’s nothing wrong with using that but it means that I’m going to have to rework that base class a bit so that it no longer relies on Windows.UI.ViewManagement.ApplicationView.Value which is deprecated.

Instead of relying on that value and having four possible states – FullScreenLandscape, FullScreenPortrait, Snapped, Filled I made modifications to that base class.

I also have code in this app which is querying Windows.UI.ViewManagement.ApplicationView.Value in order to figure out (probably incorrectly) whether the device is portrait. It is doing this in order to decide whether an image from the camera needs rotating to display properly. Interestingly, under Windows 8.0 this worked fine but under 8.1 that Value property returns FullScreenPortrait for the situation shown below which doesn’t seem quite ‘right’ to me; 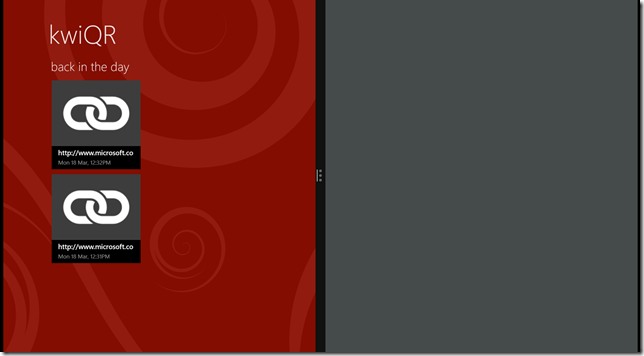 and it breaks my code because the app thinks the camera is being held at a 90 degree rotation when it’s not – the app would override this by querying the SimpleOrientationSensor but on the particular PC I’m developing on there is no sensor so the app gets the rotation wrong.

When the kwiQR app has captured a QR code (containing a web URL, a phone number, a contact card, an email) it has an option to either automatically launch the system’s default application for that item that it has captured.

Either way, the likelihood is that the user would want the kwiQR app to get out of the way and let the launched app take over a good portion of the screen so the new feature that comes with Windows 8.1 whereby a launching app can hint as to how much screen space it needs once it has launched a second app makes sense here. In both cases, I changed the code such that when the app uses the Launcher it specifies LauncherOptions such that it asks for the minimum amount of the screen to be given to itself when it launches an app.

That means that the user has an experience like; 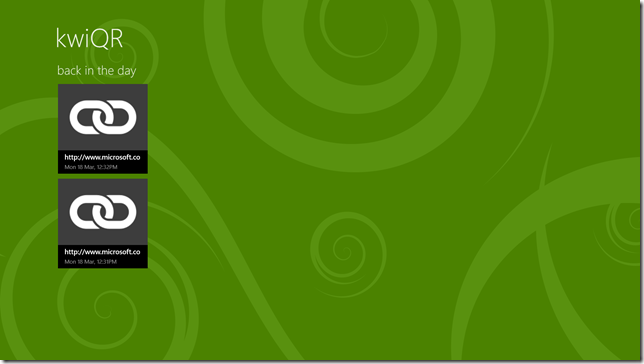 and then when they launch a URI they get; 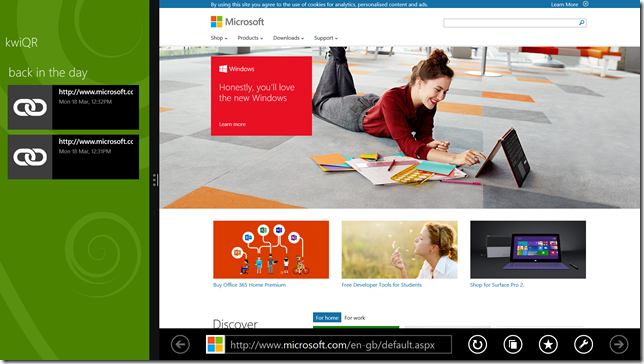 One of the features that kwiQR has is an ability to pin a second tile to the Start Screen such that the user can launch straight into the “capture a QR code” page which uses the camera.

If the user just wants to capture a QR code quickly then rather than having to run the app and get the first page; 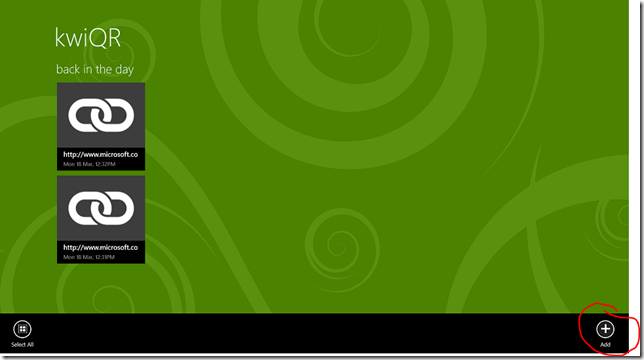 and then tape on the “Add” button highlighted to jump to the camera page;

they can pin the camera page to their Start Screen using the “Pin Tile” button highlight in the picture above.

The way in which the app actually pins the tile is to use the constructor for the SecondaryTile class which takes TileOptions to control whether the tile should show the name on the logo and the wide logo.

That constructor is now deprecated as part of Windows 8.1 and so I replaced it with a call to the constructor which takes 5 arguments and added some additional code to set the various properties of the VisualElements property to sensible values. As part of that work I also added a 30×30 logo and a 310×310 logo in case the user wanted to make a small/large secondary tile and so if the user was really nuts about the app (it seems unlikely

) then they can have two big tiles on their start screen; 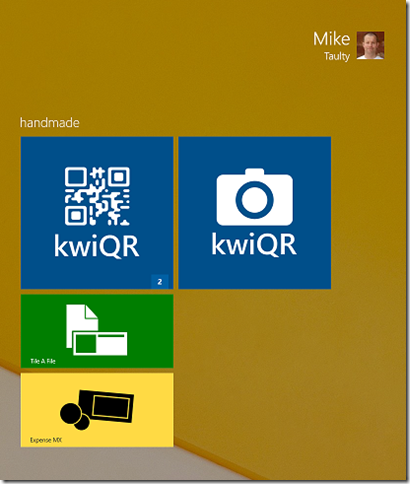 One of the slightly spurious things that kwiQR does is that if the user has captured N QR codes then it attempts to cycle the last 5 codes captured through its wide tile in order to have that feeling of being “alive” and being “aware” of what the user has been doing. The idea here was that if the user was mobile and captured 3 QR codes for URLs from magazines or similar then the tile would at least be active enough to show the user that they had captured 3 codes and the details of what those codes were. The tile also displays that number 3 as a badge; 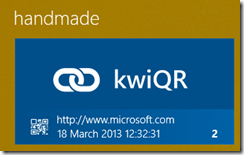 As above, the user can see that they scanned a QR code which was a hyperlink to www.microsoft.com and they scanned it on the 18th March 2013 (or at least that’s what the test data says!).

There are two problems with doing this now that the app is building for Windows 8.1;

As the MSDN page details, because of the addition of 310×310 tiles in Windows 8.1 the XML schema used for tile notifications has changed. There are now 2 versions of the schema – V1 and V2 and my code (which uses its own helper class to generate tile XML) is generating a V1 schema. The older templates have now been renamed and hence the deprecation of TileWideImageAndText02 which is now TileWide310x150ImageAndText02. Naturally, the OS maintains backwards compatibility by picking up the use of a V1 schema notification and translating it into a V2 version automatically but a V1 notification schema can’t update a large (310×310) tile.

Alongside doing that I also wanted to build up code that added these notifications to a 310×310 tile – specifically the TileSquare310x310SmallImagesAndTextList01 seemed to fit well but this involved some additional logic. For the original wide tile I select up to the top 5 most recent QR codes scanned by the app and submit up to 5 tile notifications into the wide tile which has queueing enabled so that it will simply roll around those (up to) 5 notifications.

The last piece of deprecated code that Visual Studio showed to me was a call to DataPackage.SetUri. In my app, this happens if a user has scanned a QR code that represents a URL and then wants to share it with some other app as below; 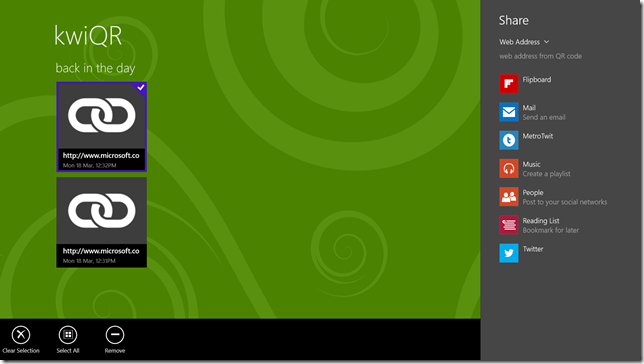 this API is now deprecated having been replaced by DataPackage.SetWebLink so that was a pretty easy change to make.

Submitting to the Store

I have a few more tests to do on this app and then I’ll submit it back to the Store. My recent submission of the updated ‘Tile a File’ app took about half a day or so to get certified so I’m hoping that the Store guys can keep up that rapid response and I should have a new version of this kwiQR app for Windows 8.1 pretty quickly.