One of the things that I find most exciting (and perhaps challenging) with Windows 8+ is that it runs on such a staggering array of devices.

The most recent “PC” I’ve bought is the Dell Venue 8 Pro; 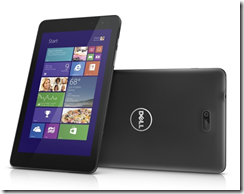 It’s a tiny tablet. It’s a full PC. It’s both. It’s neither. It’s a chameleon. Who knows what it is?

So, while desktop software is definitely going to run on this device it’s perhaps not going to be what I’d generally use it for. That’s not to say it’s not valuable to have that possibility for scenarios where I have this device to hand want to (e.g.) write a quick blog post with Windows Live Writer so I might connect to an external monitor, add a bluetooth keyboard and get something done.

On this particular form factor though I think I’m more likely to spend most time running Windows Store apps that have been designed to cope with; 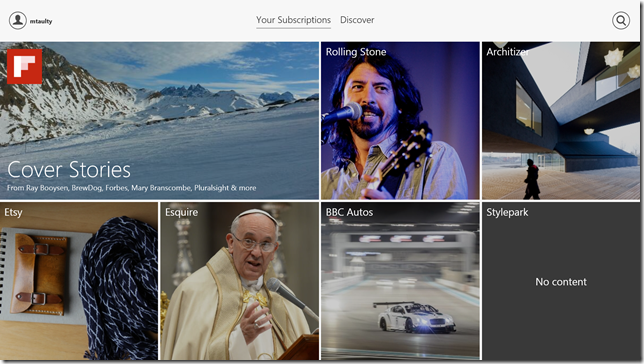 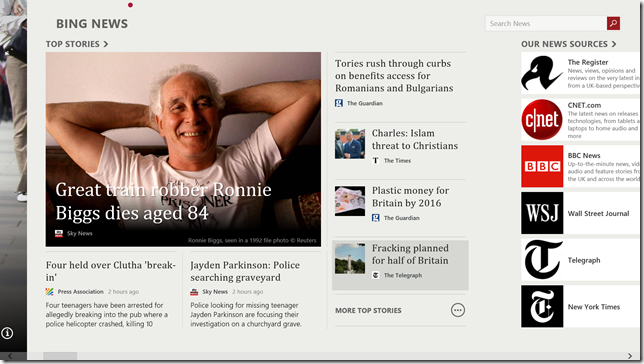 I don’t only run those apps on this small device though. I also run them on my Surface RT (this one below isn’t mine but you get the idea);

and I run them on my laptop which is currently a Dell XPS 12 as below (again, that one isn’t mine) and those screenshots of the 2 apps above actually came from this laptop;

and, if the budget ever allows me to buy one, I might one day run them on a big all-in-one machine like this Lenovo below;

This isn’t very different from what happens on the web under the banner of “responsive web design” and I guess the right name for it here might be “responsive app design”. I don’t think that’s a new term -  I think that it’s something that the Android community (with their diversity of devices) have been dealing with for quite some time ( I came upon this post as a great example of that kind of thinking ).

This same idea shows up for Windows Store apps that need to be designed to deal with extra screen space.

Rather than expecting a designer/developer to go out and buy lots of different devices, both Visual Studio and the design tool Blend have features to try and help with designing a responsive app and one of those tools would be the simulator that, amongst other features, lets you run and debug your app on different display sizes and resolutions. 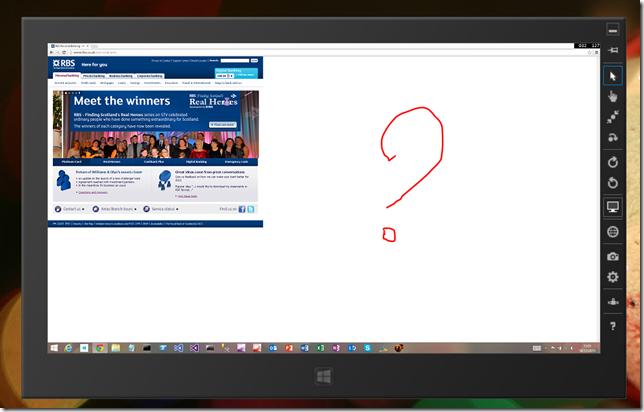 i.e. it’s not a very responsive site when run at that kind of resolution. Moving away from a web site, I can change my simulated screen size to be a 10.6” screen at 1366×768; 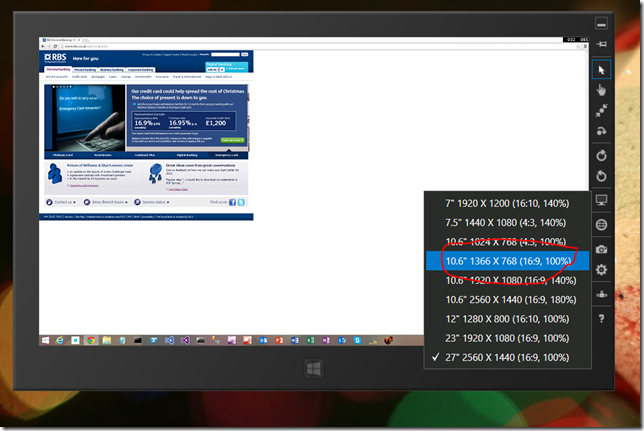 and running the Bing Travel app shows me; 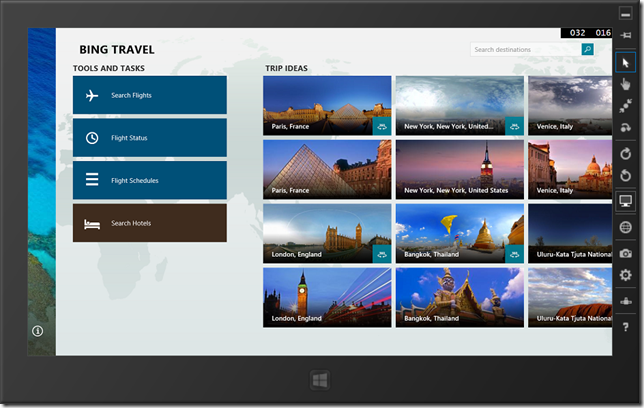 what’s interesting about this is that if I go and choose a 10.6” screen running at 2560×1440 resolution and navigate to the same part of that travel app; 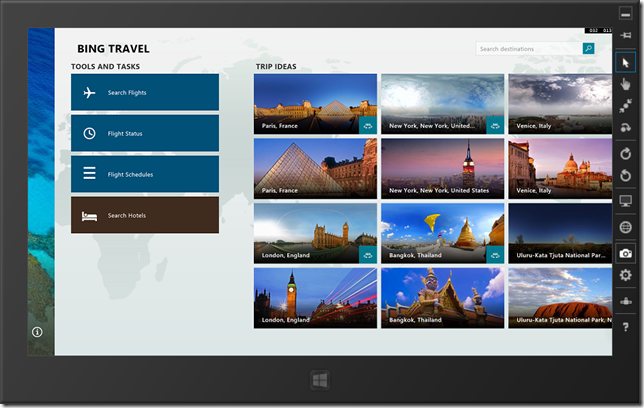 then I don’t see any difference. There’s nothing “responsive” going on here. The clue as to why this happens is hinted at in the menu that I used to change the simulated resolution; 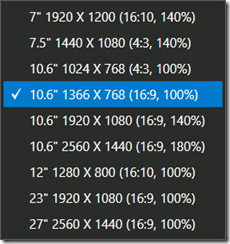 each of those resolutions have a little percentage after them stating to what extent Windows is going to scale the app’s UI. 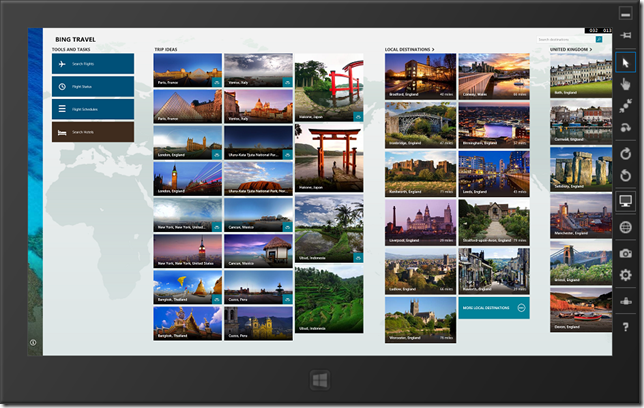 I get a lot more content on the screen – clearly the whole UI is prepared to stretch itself and the 4 “Tools/Tasks” are anchored to the top left in their layout and then the 2 grids of “Trip Ideas” and “Local Destinations” must have layout that allows them to vertically stretch to near the boundaries of their container which allows them to display a larger number of items.

This also comes into play when a user resizes an application on screen in order to display multiple apps. For example, if I take an application like the ‘Fresh Paint’ app and run it up on that monitor at 2560×1440; 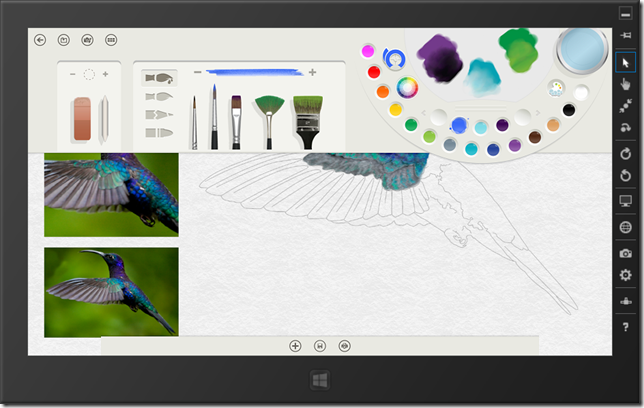 then as I scale it down to half-screen size then it scales; 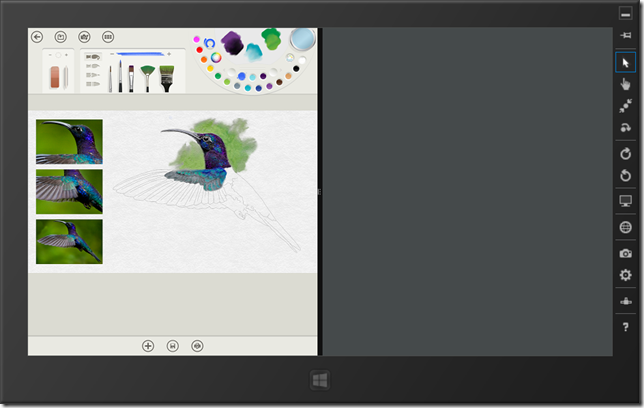 and at a really small size I think it gives up the ghost on being able to actually paint anything and displays different UI; 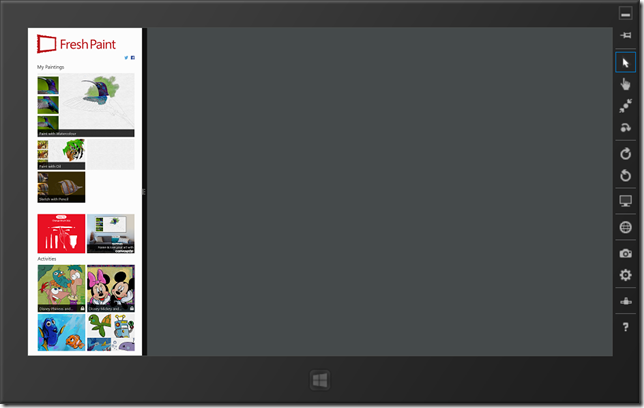 In terms of how a designer/developer handles this sort of layout in their app there’s a few approaches stretching from the;

approach which I couldn’t really recommend through to the;

which I wouldn’t usually recommend other than it does work well for certain types of content (e.g. games might do some of this) through to the;

If you’re in the XAML world then you’d be using techniques like visual states and animations to declaratively show/hide/move/resize UI elements (typically by repositioning items in various rows/columns of grids).

But it’s an aspect of design/development that spans across the web, Android devices and Windows devices – how to make the best use of the screen space that you’ve got on the device in a productive way both for the developer and for the user.