Yes, I’m still on the Windows 8.1 preview even though Windows 8.1 has gone out of the door and is generally available as per posts below;

Now ready for you- Windows 8.1 and the Windows Store

I just need to get around to installing it

Meanwhile, I wanted to experiment a little more with what I started on in my previous post Windows 8.1 Preview- Multiple Windows and specifically I wanted to see what the experience was like for an application that had multiple windows on a machine where a user may have multiple monitors with different display settings and, further, might drag windows from one monitor to another. I’d been kind of curious as to how that would work and especially in the case where those windows contained content that had loaded resources using the standard mechanisms – how dynamic are those mechanisms with respect to display settings changing while the app is running?

I knocked together a sort of skeleton which would allow me to create 2 windows. It took about 5 minutes to add a button to the first screen; 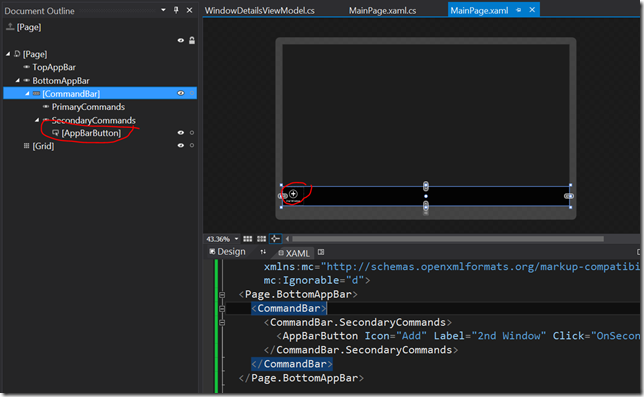 and stuck a little bit of code behind that to create my secondary window;

which is just a bit of XAML to set up a view model and display some information from it;

and then there’s just a simple view model class which that second window instantiates declaratively (i.e. default constructor time) via its XAML as you can see up there in the Page.DataContext setter on line 8 above. That view model class is largely just surfacing up the DisplayInformation class from WinRT;

and that ViewModelBase class just implements IPropertyChangedNotification so I won’t include that here.

You’d have to assume that there were differences in pixel density across those 2 screens.

So, I ran up the app and pressed the button to create the second window side-by-side with the first window on my 12” laptop;

So, that looks like I have a 175ish DPI screen and it’s in Landscape (it is) and it would usually be landscape (it would, it’s a laptop) and Windows would apply 140% scaling to this UI. Fair enough.

I dragged this window to my second monitor, crossed my fingers and waited to see if things updated. They did;

and so on this monitor, the DPI is closer to the regular 96 and Windows would apply 100% scaling to this UI.

Clearly, at an API level then Windows “knows” that my window has moved monitors and it fires an event such that my app code can pick up that event and do “something”. What I wondered next was whether Windows could do anything to automatically resolve resources based on this knowledge.

For instance, if I temporarily change my secondary page to be a Grid which is defined as 96×96;

Similarly, if I use a piece of text;

then that looks pretty much the same size on my 2 monitors as I drag the window backwards and forwards. The problem is that some resources (particularly) images just aren’t going to play ball nicely and that’s why Windows has its scaling system to provide alternate images based on scale factors.

I went out and find an image of the Surface 2 on the web that was 485px by 323px (not a great size – should really be a multiple of 5 pixels) and dropped it into my UI with a simple image tag;

but I also found an image that was twice the size in terms of pixels and I attributed the 2 images so that I could tell them apart; 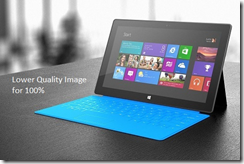 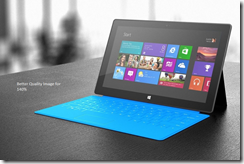 and added them to my project using the regular naming convention; 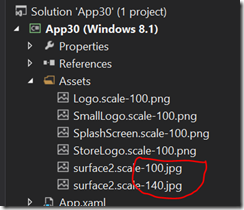 Now, I may have gone a little over the top in terms of the size of my 140% image but I ran up the app and, sure enough on my 24” inch monitor the second window displayed; 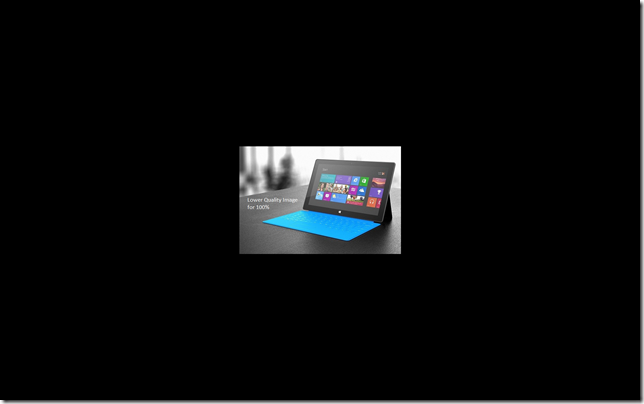 and on my 12” monitor the second window displayed; 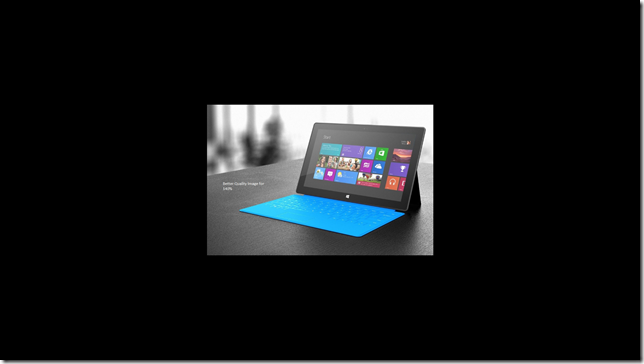 and so the resource-resolution system is clearing listening to the right events and is refreshing (in this case) my image for me as it realises that the surrounding graphic capabilities have changed as the window moved from one monitor to another – very neat.

That made me wonder. What if the picture to display was actually hidden away inside of a value that was data-bound. As a simple example, what if I had this “ViewModel”;

and I change my UI such that it sets up one of those objects as its DataContext and then binds to it;

then does that still work? Does my image still resolve to a different image as I move the window from my 12” screen to my 24” screen?

Not surprisingly, yes, it does

Naturally, if you’re loading up images that your app has stored in local storage (i.e. local/roaming/temp storage hanging off ApplicationData.Current) then the system isn’t magically going to swap those images around for you as and when the Window transitions from one monitor to another and the DPI changes.

As an aside, one of the things that I’m not 100% sure on is whether there is a way to use the resource system to resolve images in data folders using the same naming system that it uses when loading up packaged resources. For example, if I have a path like ms-appdata:///local/surface2.jpg then can I get the system to resolve that for me to ms-appdata:///local/surface2.scale-100.jpg and follow the same naming convention as for resources? I’m not sure whether I can but I’ll return to that if I plug that gap in my knowledge.

Equally, if you’ve loaded images from the web then the system is not usually going to be able to magically pick up display changes and go back to the web for “the right image”.

I think in both of those cases, you’re going to have to do some work yourself and make use of the DisplayInformation.ResolutionScale property to figure out what images to load or, if you’re in the JavaScript world, you can use something like the CSS media-resolution feature in order to specify different background-image values for various media queries and hit the problem that way.

This is one I haven’t tried yet. I wrote a little blog post about Windows 8.1–Resource Packages and App Bundles where I took a basic look at how for Windows 8.1 it’s possible to build resource packages – e.g. it’s possible to build a package of resources that only apply to the 140% scale so that all those 140% scale images are in that package and that package would not need downloading onto a system running at 100% scale.

So…what happens in the circumstance where a user has a system with a DPI that would resolve to 100% scale but then plugs in a monitor that resolves to 140% or 180% scale and then drags a window from their 100% scale monitor to their 140% scale monitor?

Does the system go back to the Store and magically get the additional resources required and, if so, how does that affect the running app package?

As far as I know, the answer is “yes, the system does do that” but given that the Windows 8.1 Store only opened yesterday I’ve not tried it yet but I’ll update the post as/when I have any more detail.