I’ve been trying to track the ability of a Windows 8 Store application to do work in the background since the first previews of Windows 8 shipped. The idea that a Windows Store app is more than the UI that you see on screen is a really interesting one and, for me, it’s important to understand that area reasonably well such that you can decide what a Store app can/can’t do and how to put in place an architecture that allows code to run in the right place at the right time.

This is explained up on the developer centre and I’ve posted about certain aspects of it in the past.

One of the new types of triggers that arrived in the Windows 8.1 Preview was a LocationTrigger – a way of triggering activity when the machine’s location changes or “geofencing” as it seems to be known.

Running background tasks in response is just one part of the new geofencing support in Windows 8.1. It’s worth having a look at the “Start to Finish” guide up on the developer centre to get a bigger picture view of geofencing and it’s also worth look at the BUILD video referenced below for more info.

For me, it’s perhaps more likely that I’d want this kind of functionality on a phone that on a Windows 8 tablet/laptop but it’s not hard to think up use cases for it and especially as slates running Windows 8.1 are getting smaller as illustrated by the new Dell Venue 8 Pro below in the video from CNET;

It’s not too hard to think up scenarios – e.g. it might be used in a line-of-business scenario to download some kind of work items when a device enters/leaves a particular location such as for a delivery messenger or a travelling salesperson or whatever.

and then I needed to specify a background task so I went and created a basic, empty background task project (i.e. a WinRT component in .NET) and listed it in my manifest and I also referenced it from my main project. I tend to do that for background tasks because the API for registering them wants a name of the type implementing the background task and I find that “easiest” to do if I can use reflection to ask the component what its name is; 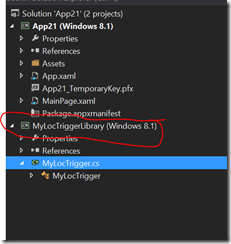 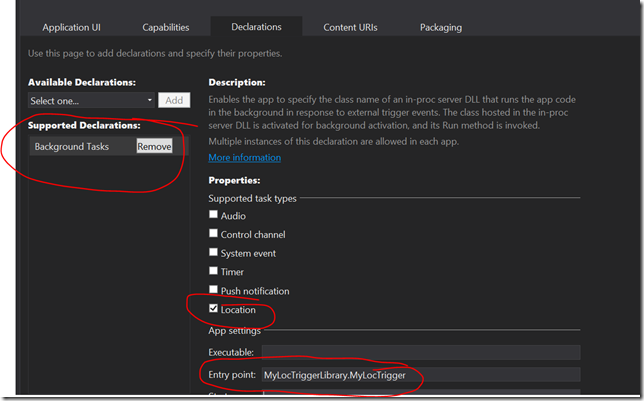 From there, I hit a bit of a problem which surprised me. I find that if I try and build this code then;

I wonder if I’m missing something or whether this is just “a preview thing” so I tried to fool the build system by claiming that I also supported a “Timer” task and that seemed to pacify the build system even if at runtime I’m not actually going to implement a task that is driven from a Timer trigger.

From there, I tried to add a couple of test buttons onto a UI just to run some sketched out code to see how things worked. Firstly, I wrote a little piece of code whereby my app could ask to be on the lock-screen;

The next thing is to set up a Geofence around some region of interest and then ask the system to alert me (via my background task) when the user wanders in/out of that fenced area for a particular period of time. The most natural thing to do here is probably to put a map on the screen and so I thought I would make an attempt at that. I went out and got the Bing Maps SDK for Windows 8.1 Preview and dropped a simple map control onto the screen along with a few buttons that might let me try some things out; 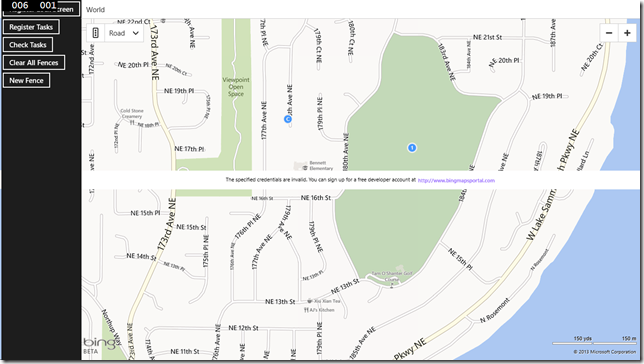 I hacked some code together (no nice patterns, design, MVVM or even a nice set of classes) behind those buttons.

The “new fence” button changes the mouse cursor to a cross-hair, lets the user click on the map and drops a 1km geofenced area wherever the user clicked. Just so I could see what I was doing I made the system’s current location appear on the map as a Pushpin with the letter “C” (for centre) in it and I made each geofence have an incrementing id which is also displayed on the map. So, in the above screenshot the machine is centred in Seattle on 178th Avenue NE and there is a geofenced area in the golf course to the East.

In terms of setting up a geofence, I found it pretty simple – here’s the handler that does the work;

and so the handler essentially gets the mouse click position from the map in lat/lon coordinates and then creates a BasicGeoposition, uses it to construct a Geocircle with a radius of 1km and uses that to create a Geofence which is monitored for the machine entering/leaving it (line 27), multiple times (line 28) and the machine has to be in/out of that area for 5 seconds minimum in order to trigger the geofence (line 29).

That Geofence is then added to the list of Geofences that the system is monitoring on my app’s behalf (this list can easily be retrieved later and interrogated, cleared, etc).

For the moment, I added some dummy code into my background task implementation and then set about trying to test this out. This proved hard.

I struggled with getting this to work for many hours. Firstly, the only way I know of testing this out (other than to drive around the block with a device) is to use the Simulator which has that nice dialog box for typing co-ordinates into;

It’d be nice if this was a draggable map and had some more of the features of the Windows Phone emulator version but it serves its purpose. I encountered a few things though;

But I came across a bit more of a blocker. In as much as I could tell, changing the simulated location in the simulator did not seem to ever trigger my background task which was waiting on its LocationTrigger.

I wrote bits of code that sync’d up to the GeofenceStateChanged event on the GeofenceMonitor class to try the scenario where an application wants notification of geofencing events while it is the foreground, running app and I would find that I could change the simulated location of the device such that these foreground events would fire when that location entered/exited a geo-fenced area so the bits seemed to be working.

Getting a bit desperate, I did a bit of a web-search and found a bug report which suggested that things might not work.

That was a bit of a blow – but not to be defeated, I tried another tack…

“Walk Down the Street” Testing

I thought I’d change my test code such that rather than setting up a 1km geo-fence area it allowed me to set up a 50m geo-fenced area and then I figured I’d install the app onto my Surface RT (also running Windows 8.1 Preview) and then set up a 50m geofence around my current location before walking up the road until the device “knew” that it was no longer within that 50m geofenced area and then I’d expect an “exiting” event after I left the area and an “entering” event when I came back into the area.

Naturally, this is a bit hit-and-miss with the Surface RT because it’s not a device that has GPS making it exactly aware of where it is at any time – you have to hope that it has some other way of figuring out that its location has changed and, in my case, that did seem to be happening and I can only assume that the device was doing this based on the WiFi networks it could/couldn’t see.

I experimented with this but, to date, I’ve had no success. I’ve not seen a background notification on my device actually fire. I can walk far enough (i.e. a few 100m) up the street such that the device clearly knows it is more than 50m away from the geofenced location (I can see this using both my own app and the built-in Maps app on Windows) but I never see my background task get invoked.

So, at the time of writing I’m still waiting to verify whether I can get this to work – perhaps it’s a “preview” thing or perhaps it’s something wrong with my hacked together test code. Speaking of which.

Here’s the code I was trying out. I have a tiny piece of “UI”;

and then I have a little bit of code sitting behind that;

and then a separate WinRT component project for my background task;

So far, I’ve failed to get this LocationTrigger->Background Task scenario to work for me with setting up geofenced areas and then entering/leaving them.

I’ll return to it when I’ve moved to Windows 8.1 RTM and see if I have more success there but it’s worth being aware of this new capability and perhaps trying it out for yourself and see if you can get the SDK sample to do the right thing with respect to background tasks and geofenced areas.