One of the things that I’d heard about in a couple of places for a Windows 8.1 store app was the idea that work had been done to improve the situation where you might have an app that supported a number of different variants such as;

Generally, these things don’t change on a user’s system and so it would make sense to split up an application’s code & resources such that at deployment time the system could be smart enough to only download the bits that were needed for that particular machine.

On Windows 8.0 this didn’t happen and different architectures had to be submitted into the Store separately but Windows 8.1 improves this with “App Bundles” and “Resource Packs”.

This is pretty well explained up on MSDN and I found it was really worth reading down to the bottom of that document to try and get a handle on what’s going on. In short, my simplistic understanding is;

There’s a great video up on Channel 9 which explains this better than I just did;

and another good way of illustrating it is to take the “Application Resources” sample from the developer centre and then drop it into Visual Studio 2013 and create an application package from it. That is – if you have a look around that project you’ll notice both English, French and Japanese resources and also resources (images in this case) at different scales; 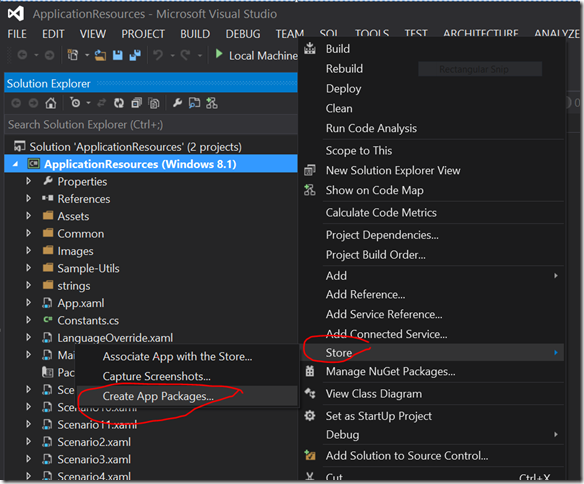 and then on the dialog ensure that you’re asking Visual Studio to magically create an app bundle for you;

Then have a look in the resulting .appxbundle file (by renaming it to a .zip file);

You can also have a poke around in the AppMetadata folder and see the XML description of the bundle breaking down the different packages in my case as below;