One of the things that I was looking at in my post on Azure Mobile Services the other day was the idea of creating a ‘virtual table’ or a view which represented a join across two tables.

For example, imagine I have a new service mtaultyTest.azure-mobile.net where I’ve defined a person table;

and an address table;

and then if I insert a few rows;

However, I don’t really want to alter either script and so (as in the previous post) I create a personAddress table where my hope is to join the tables together in a read script and present a ‘view’.

In the previous post while I knew that I could create a read script on personAddress, I didn’t know how I could grab the details of the query (against personAddress) with a view to trying to redirect it towards another table such as person. I asked around and Paul gave me some really useful info although it’s not quite going to get me where I want to be in this particular post.

Here’s the info that I wasn’t aware of – imagine I’m sending a query like this to the person table;

on the server-side, I can pick up the details of that query in a read script by making a call to getComponents(); 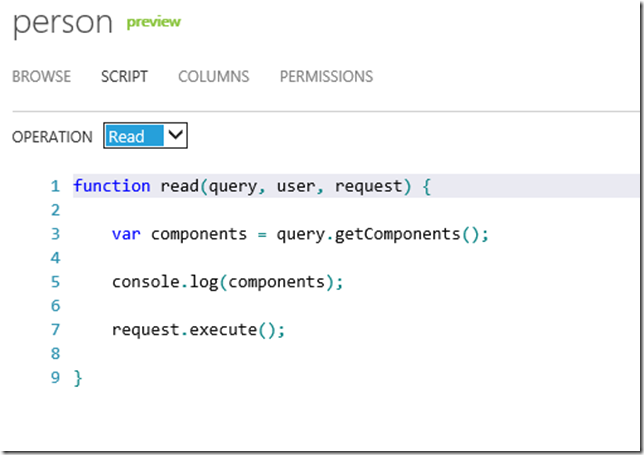 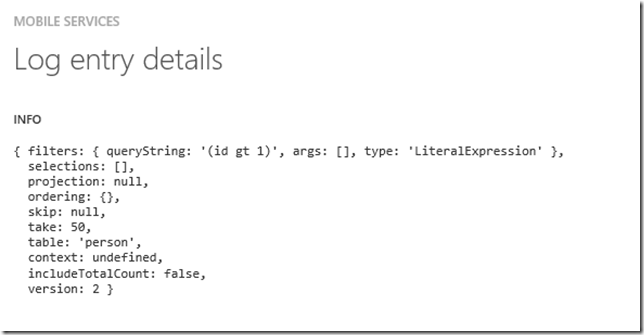 i.e. it gives me all the information I need to pull the query apart (albeit in a way that’s not documented against Azure Mobile Services right now as far as I know).

There’s a corresponding setComponents method which promises the idea of being able to change the query. Clearing the read script from my person table,for my personAddress table I thought that I might be able to write a read script like; 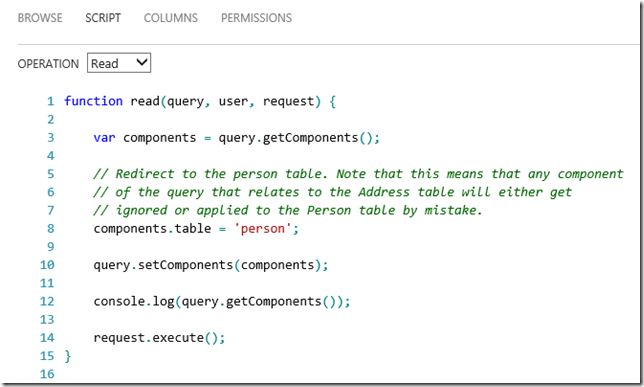 and, in theory, this does work and you can alter the properties like skip, take, includeTotalCount and so on but in the current preview you can’t actually alter the table property which is what I was wanting to do in order to query a different table than the one that the script is directly targeted at.

I believe that this might change in the future so I’ll revisit this idea as/when the preview moves along but I thought I’d share the getComponents()/setComponents() part.