Quick caveat – these are just my thoughts, not some new terminology from Microsoft or some kind of review of Windows 8 or any specific device. 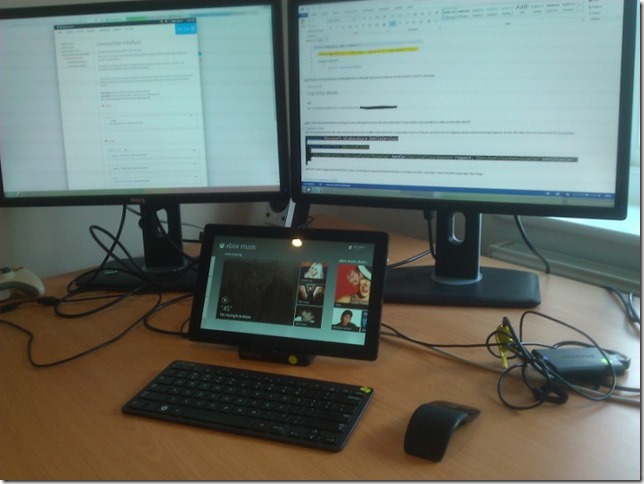 What I don’t really want though is to have a separate device for every one of those scenarios – mostly, I need a device and a software stack that can adapt although for the edge cases I might sometimes choose a specific device because it has more CPUs, memory, disk, connectivity, battery, etc. In that case, I need good cloud support to make sure that my ‘stuff’ shows up on whatever devices I use.

‘from the sofa to the office’

and this really comes from my own experience with the idea being that I can sit on the sofa with my slate browsing the web or playing a game or reading the news and I’m using touch as my input mechanism. However, if I’m reading some web article that inspires me to go write some code, I simply walk into another room and dock my slate, pick up my mouse and keyboard and I’m in a different context and using the exact same device in a different way and I maybe plug in a few peripherals (monitors, printers, USB hubs) to get more stuff done.

Or, I drive off to the office and do the same thing and I fit in to Active Directory and all the group policy stuff and Network Access Protection and Bitlocker and DirectAccess and VPN and all those bits that big companies need including all those Line of Business and productivity apps that run on Windows.

For the past 12 months or so I’ve been living this with the Samsung Slate (prototype) device given out at the BUILD conference and it’s moved into being the main machine that I work on.

The slate is spec’d with;

and I marry it up with;

There are times when I want more power from a device and I would choose to use a laptop or a desktop rather than the slate but this device is so close to doing everything that I need that I use it more than any other device right now with the possible exception of my Windows Phone.

The slate pretty much spans that spectrum from the sofa to the office and I’m running everything from Visual Studio 2012 and SQL Management Studio through to the Office 2013 Preview and then on into a whole bunch of Windows Store apps (especially Wordament and Metrotwit) that I’m using all the time.

In working in ‘desk mode’ today, I thought I’d take that photo above to show how I had the slate set up and it prompted a bunch of questions on Twitter like;

“But can you run Visual Studio?”

and so I thought I’d share. In this photo  I’m using the slate in “3 screen desk mode” where I have the device docked, mouse and keyboard connected and a wired ethernet connection and them I’m running 2 additional monitors ( Dell U2412M monitors ). I have them stacked up like this;

That monitor is connected using one of these;

which you can go and read about and I can highly recommend as a way of adding a 3rd or maybe 4th monitor to a machine. I would say that I bought this for my laptop which has USB 3 and 8 cores whereas the slate has only USB 2 and 4 cores so with the slate I tend to use that 3rd monitor for more ‘static’ items like web pages and documents rather than, say, video and I’ve also dropped the resolution down to 1680 to try and give the hardware more breathing space.

Nonetheless, I still find it a pretty useful way to use the slate in ‘desk mode’.

While the slate has become my main machine and I rely on it every day, it’s easy to forget that it is a prototype device from nearly a year ago. There are a bunch of real, new devices on their way which you can go and preview on the official site;

and the imagery that you’ll see up there includes all of the devices below that I’ve stolen the images for and built into a big single image.

That site shows some of the diversity of what a PC can be in 2012 and beyond – I’d like to buy about 10 of them and am going to have to make a tough choice at the point where I actually get to sit down and think about which 1/2/3 I can actually own; 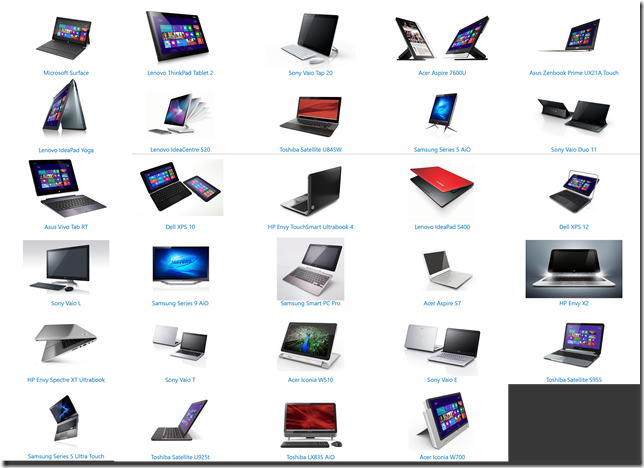 and, for me, that’s the start of what I see as this era of the ‘Modern PC’