I wanted to have a bit of fun with Windows Phone 7 and so I thought I’d build a little application as a background task. 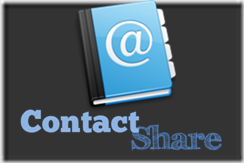 One thing that I miss from previous phones is that scenario where you meet someone and want to quickly swap contact details. With previous phones there was a notion of “beam contact” which relied on an IR link but that seems to be old hat these days and so I thought I’d see if I could come up with something a little more “modern” that would work on the phone without requiring a cloud connection.

I daresay someone’s done this already but, regardless, I had fun working at it

and decided to try and make the idea of “photographing the contact” work. This led me to look at  QRCodes and, specifically, I looked around for the “right” way to represent some basic contact information such as;

in a QRCode and the best thing that I could find which seemed to fit was a MECARD which takes the format of a string looking something like;

With all that in place, I was ready to try and build a little app. It ended up working as below.

When the application runs up for the first time, it asks for contact details;

and as soon as you’ve typed in anything and hit the Store Changes button it persists those details into isolated storage and the next pivot item along will change from displaying a place holder to displaying a QR code that represent your contact details;

When the application starts up in the future, it will spot that it has persisted stage and switch straight to that QRCode pivot ready for someone else to take a photo of it on their phone and import it into their contacts. Speaking of which…

Importing a QRCode to Contacts

One way of importing a contact from someone else’s phone is to get them to run the app which will quickly launch and display their QRCode and then you run the app and switch to the next pivot item along;

where’s there’s a button that will let you take a photograph and then import it as a contact. Once the contact is imported, there are context menus that let you save the telephone number or the email address that you just imported using the standard experience on the phone.

There’s nothing like a quick demo for bringing things to life so here’s a little video of the app in use;

The other way of importing a contact is to start with the camera, take a photo and then my app hooks into the pictures extensibility on the phone so that you can launch my app straight from the camera.

This isn’t in the version that’s in the marketplace today (I’m currently in the process of updating) but it does provide a second path to the same functionality;

Lessons Learned in Building for the Windows Phone 7

In putting this together, there’s a few things that I learned about the phone which experienced developers will already know but I’ve not been building phone apps since the very early days so I thought I’d share my top thoughts;

All in all – a lot of fun. It took me a few hours or so to put that app together but I daresay quite a bit of that was in trying to fathom out a few things on the Phone that I wouldn’t need to re-learn the next time around.

) – you can search for ContactShare on the marketplace to give it a whirl and, naturally, it’s free.