I know next-to-nothing about 3D graphics which is a shame because it’s a huge feature for Silverlight 5.

Not being one to give up easily though I didn’t think I’d let my lack of knowledge hold me back. What I know about 3D in Silverlight is that the API is a low level API rather than the high-level model that you saw in WPF and which I could just about deal with

From there, 3D support is just as easy as;

and so it’s perhaps not so easy at all

but remember that there are higher level frameworks/abstractions already out there like Balder (http://balder.codeplex.com/).

As an aside, you have to have the enableGPUAcceleration flag switched on to attempt any 3D work and you can test whether you have 3D support by checking;

Once you’ve got all that figured, you still have to draw something – I’m just putting off the inevitable

I read quite a few blog posts, digested a few samples and brought back a few details that I remembered from other programming models and came up with what I think are the steps to get the most basic of things drawn onto the screen.

These are the scrappy steps that I took/learnt along the way and I’ll draw it together into something neater at the end of the post.

This is pretty simple, for an in-browser app you just set it on the plugin parameters;

whereas for an out-of-browser app you just set it in the metadata via Visual Studio; 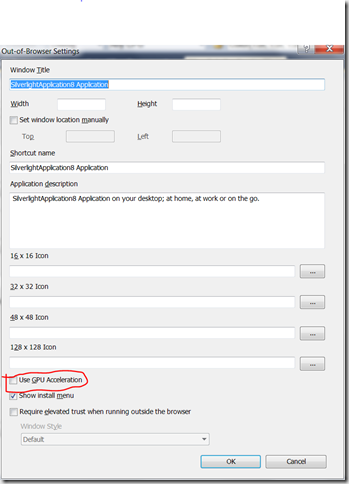 Step 2 – Set Up a DrawingSurface and Handle Draw

You need a DrawingSurface in order to draw something so you can set one up pretty simply in XAML;

You could manage without this library but it’s going to save you a tonne of trouble and you’ll simply end up reinventing the wheel until you have it so go get the;

Step 4 – Decide How to Represent Vertices

One of the things that I find kind of weird about the 3D APIs is their amazing flexibility. You get to decide how you want to represent your vertex and what data you pass to vertex shaders and pixel shaders. It’s up to you and I daresay that there’s all kinds of fancy things that you can do.

I think that the bare minimum requirement is that you are going to need to represent;

and so I used my own data structure that looks like this;

Step 5 – Build Metadata Describing what you did in Step 4

Now, because of the flexibility of the APIs, you have to set up some metadata that tells the APIs about how you are representing vertices and you do this via a thing called a VertexDeclaration. Here’s my specific example;

I want to draw a triangle so I create some vertices in an array (using my own format from Step 4 above) to represent that triangle;

and this is basically the triangle drawn in PowerPoint with the vertices labelled; 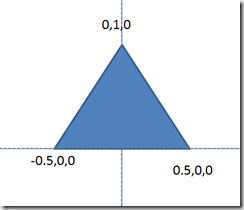 I’ll change this triangle later to centre it properly but for now note that the vertices are defined in a particular order; 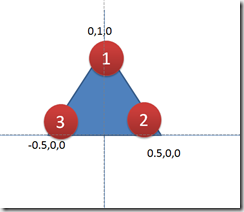 going “clockwise” around the triangle as that’s significant for drawing.

Step 7 – Create a VertexBuffer from your Vertices

As far as I can work out, you need to do this in your Draw event handler so that you can use its DrawEventArgs in order to get hold of a real GraphicsDevice. Mine looks something like this;

you’ll note that I’m using a simple flag in order to make sure I just do this work once as I’m just trying to draw a triangle that never changes.

This is where I spent most of my time. I’ve written some pixel shaders for WPF and Silverlight but I’ve never written a vertex shader before so I had to try and fumble around a little.

Something along the lines of this diagram that I made up;

You can read much more about shaders in general here on MSDN but I’ll admit that I’m a long way from digesting all of that yet.

In my case, after a little looking around the internet, I came to the conclusion that my vertex shader takes on the responsibility of applying a transformation matrix to the vertices which means that they could be scaled, rotated, translated etc and so I wrote this shader;

I’m not 100% sure it’s correct but I went with it and I built it up using the fxc compiler from the DirectX SDK as in;

to give me a file VertexShader.vs which contains the compiled shader that I need to hand to the framework.

I can load the shader by embedding it into my assembly as a resource and loading it up with something like this from my Draw method because, once again, I think it needs access to the GraphicsDevice;

Note that it’d be relatively easy to package up a general purpose shader like this one into a library to save having to do this more than once unless you need some fancy shader and I believe that might happen by the RTM of Silverlight 5 for a “baseline” shader or two.

Step 9 – Pass a Transformation Matrix to the Vertex Shader

I tried to set up some suitable values for this;

and notice that it’s the last line of code there which links up this matrix with the one that we defined as register c0 when we wrote our vertex shader – i.e. this is how our managed code can “pass” something to the shader.

The vertex shader manipulates the vertices and the pixel shader I guess manipulates the pixels. I’ve written these before for WPF/Silverlight but I think those were perhaps a slightly special case.

I’m not sure that my vertex shader passes enough information on to the pixel shader for it to do something useful but I put together a dummy one which simply returns the color that it was originally passed as in;

and I seemed to “get away with that” for the moment and I compiled it up with the fxc tool again;

and that gave me a PixelShader.ps file that I can then embed into my resource and write code to load that up and set it as the pixel shader that the framework uses and so me additions to my OnDraw method are;

The last step is to ask the GraphicsDevice to draw our vertices passing them through the vertex shader and the pixel shader having first cleared the area that we’re drawing to;

Step 12 – Tidying Up & Putting Together

Tidying up that code a little by taking those basic steps and rewriting it, I ended up with quite a lot of code for a blog post

but I thought I’d post it in its entirety.

Firstly, my VertexDefinition class that I use to define a vertex;

Then a little TriangleModel class to represent my triangle;

Then a little SceneTransformations class to wrap up the matrices;

Note that this class is trying to be “slightly smart” in that it takes into its constructor a FrameworkElement which it then watches for its SizeChanged event. When that event fires, we update the transformation matrix to take account of the aspect ratio of the parent we’re inside and we fire our own RedrawNeeded event.

The intention here is that someone can sync up to the RedrawNeeded event, call ApplyToDevice and then redraw.

Next I wrote a couple of little extensions to make it slightly less ugly to load up shaders;

and finally the main XAML file;

and the code that lives behind it;

Note that I think what I’m doing here around redrawing is a little unusual but it’s because my triangle never changes so I don’t see the need to redraw unless someone resizes the window which is what I’m trying to handle here and that (AFAIK) is the only time that my DrawingSurface will call OnDraw other than in the initial call.

And all of that just to draw this triangle 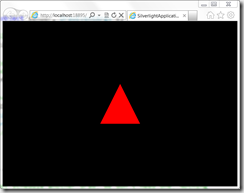 Here’s the source code (TODO) for download if you want to take a look at it. Note that I added custom MSBuild pre-build events to try and invoke the DirectX SDK fxc.exe tool so if you don’t have this tool your build may well fail.

There are more complex/complete (correct!) examples out there on the web that you might find more useful like this one; 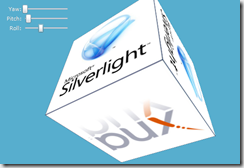 This post was really me walking through a learning curve to figure out the very basics of the API so that I could get a feel for it.

but I’m already pondering on how I can now draw multiple objects and perhaps have my vertex shader take a little more information in order to scale, rotate and transform them around the screen. Playing continues…