Following on from the previous post I wanted to add some simple buttons so that when a user is looking at a list of sessions they can quickly click and select that they want to download all the available PowerPoints or all the available hi-def videos or whatever it might be.

I revisited my SessionsView and added a StackPanel into the main Grid for that view and threw 3 buttons onto it making sure that the grid row that they were in was set to automatically size itself;

I did that first and added 3 new properties to my SessionViewModel to reflect what it is the user wants to download;

at this point I need to make sure that my SessionView actually binds the 3 checkboxes that it displays to those properties so I did that back in Blend and I noticed that Blend seemed to update the view of my sample data to include these 3 new properties which is pretty smart;

and so I bound those up to the 3 CheckBox instances and their IsChecked properties which is easy enough to do if things are named nicely.

I also decided to replace the icons I was using while I was there as I’d gone off the folders and wanted icons that looked more like PowerPoint and Video files so I did that too.

and then I added 3 simple commands to the SessionsViewModel which can flip these bits on the underlying sessions;

and they all call a common routine;

and so with that in place I should be able to finish up my 3 big buttons by firstly changing their content to include images; 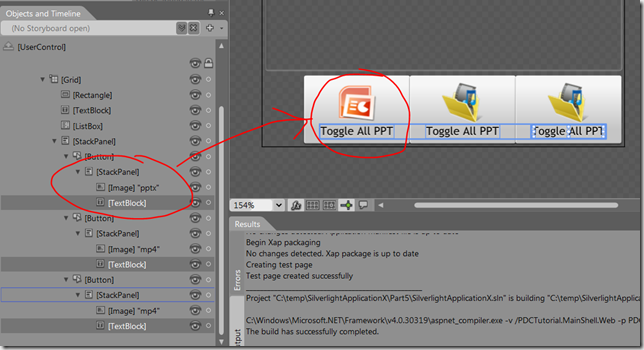 I also wanted to lose the chrome on these buttons and so I set their templates to {x:Null} and I wanted to bind them up to the right commands. The easiest way I could find of doing that was to create new sample data for my SessionsViewModel as I’d done previously for my SessionViewModel; 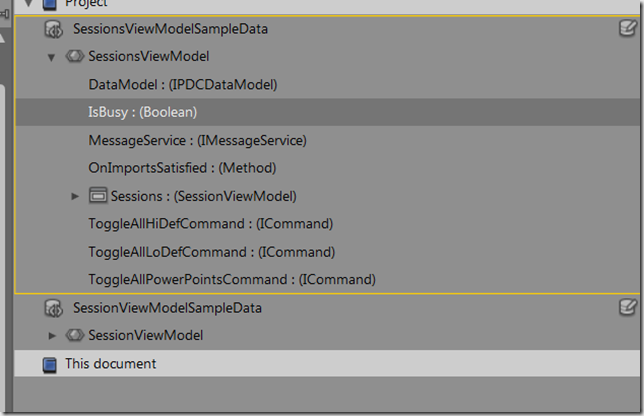 and then just drag the new commands across to the buttons. An “interesting” side effect of creating this sample data was that my view suddenly went Busy in the designer;

and this was because the sample data just happened to set the IsBusy sample value to true so I edited the data to set it to false to make it easier to work with.

With that done, my buttons are up and working; 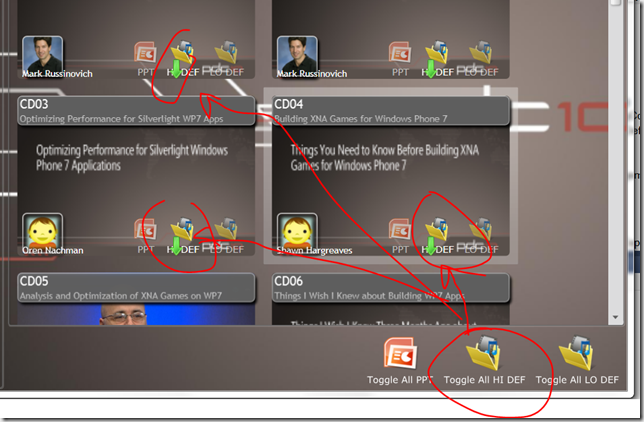 although it did occur to me immediately that this isn’t the most usable UI as it simply does a logical inversion on the existing value whereas you might actually want a CheckBox rather than a button that toggles. Maybe I’ll fix that in the next post.

Building a set of sessions to download and downloading them…