Following on from that previous post I thought it might be interesting to look across the controls that ship with the various frameworks (i.e. WPF, Silverlight and Silverlight for WP7) and see how they respond to being dropped into a touch-based interface.

I thought I’d take a smattering of controls that I’ve come across in touch interfaces – Button, Calendar, Slider, ListBox, CheckBox/RadioButton, ComboBox, TreeView and see how they work out on the different platforms (if they exist).

I started with a ListBox which is just displaying a bunch of strings – displayed here in Blend; 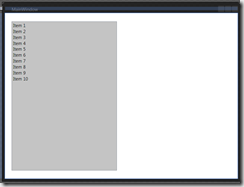 as it stands, that’s not very pleasant to use from the point of view of touch but a few minor tweaks;

and I ended up with; 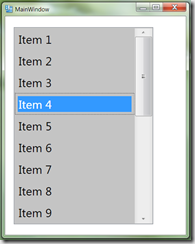 which I found pretty usable on my touch monitor. It responds to pan gestures and the content scrolls with inertia and gives boundary feedback so it all feels pretty good.

It’s a similar story for a TreeView. In its raw incarnation it’s pretty much impossible to use; 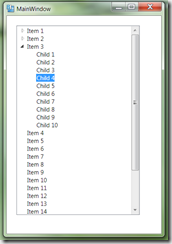 but a few tweaks;

I ended up with;

which was quite usable once you could look past my ugly triangles.

For basic controls like Buttons I find that they work pretty well – no particular problems although I found myself wanting to make them bigger than I usually would; 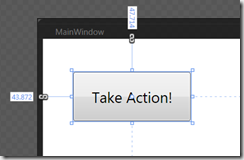 and I also wondered whether they should really be re-templated as the Windows Phone 7 does so that they have a big border around them that makes them more hittable. That is – keep the button relatively small but be generous on the hit-testing. I took the default template and wrapped a Border around the Chrome within it; 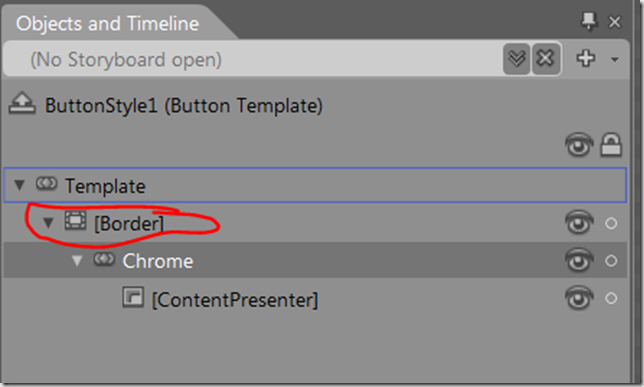 then gave that Border a solid colour with a zero alpha value and made sure it had some padding; 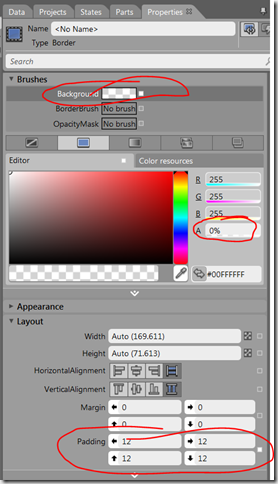 and that seemed to make my button more “pressable” in the sense of allowing for a margin of error around the outside of it.

It’s a similar story for a CheckBox and a RadioButton. By default it doesn’t work too badly because there’s quite a lot of screen to aim at even with small fonts; 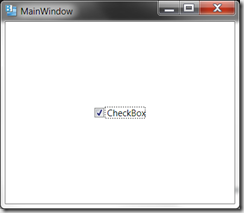 but a large font does a lot to help; 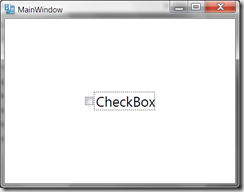 ( that’s 16 point ) and that makes it pretty usable although I must admit that I’m not so keen that the other visuals of the CheckBox don’t scale up as the size of the control scales up.

It’s easy enough to wander into the template and resize it manually; 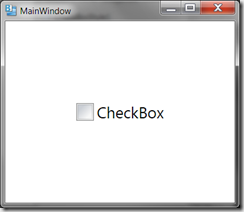 although that doesn’t really help because the little tickmark inside it doesn’t scale properly so at that point you maybe re-template the whole thing (I’m not too keen on the WPF approach with BulletDecorator to this anyway because it seems a little opaque to me) and you can then make your checkbox as hit-testable as you like. 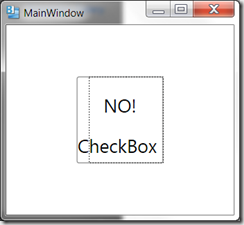 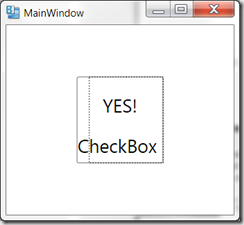 makes it pretty easy to use from a touch perspective.

What about a ComboBox? I’m not 100% sure about the usability of a ComboBox in a touch interface but I was actually able to use it reasonably even at default font sizes although selections tended to hit the wrong items.

Large fonts pretty much seemed to be all I needed here but I also added in a little padding to the ItemContainerStyle and the control became very usable with the pan gesture scrolling up/down; 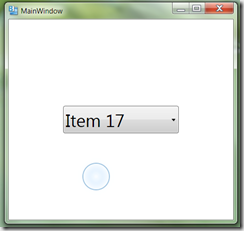 What about a Slider? By default, it’s pretty hard to get hold of of that thumb and drag it around; 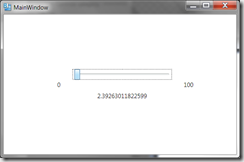 and no amount of sizing on that Slider will make the thumb bigger although if I size it carefully and then wrap it into a ViewBox that’s a cheap way of making it size and work more easily with a finger on a touch screen; 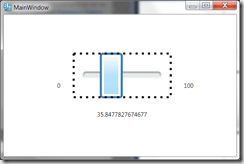 but I suspect the right way to go here is to re-template.

Finally, what about a calendar? By default, it’s a bit tricky; 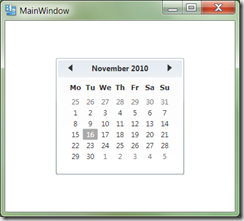 I started with my usual trick of trying to change the font size and it had zero effect on the control. I tried applying my trick of wrapping it in a ViewBox and telling that ViewBox to do Uniform scaling and it worked pretty well

In this screenshot, these items are approximately “finger sized” and it’s pretty easy to select dates; 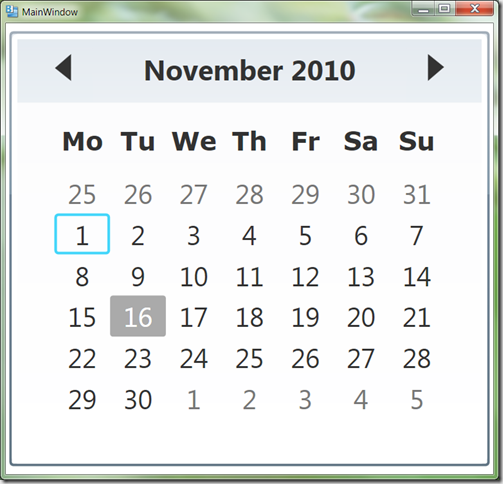 and probably good enough that I wouldn’t be tempted to go digging off into the templates on this one.

So, all-in-all I’d say that the built-in WPF controls do a pretty decent job of being touch ready in .NET 4.0 and a combination of font sizes, margins, padding and some ViewBoxes can take you a long way.

I’ve a feeling that this is going to be painful but let’s see how I get on. Starting with a ListBox in its “vanilla” configuration just displaying some strings; 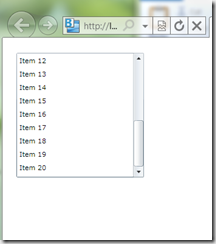 It wasn’t very pleasant. Scrolling is only achieved by sliding the scroll bar which is way too small and item selection is also tricky. I altered;

and that was better but it still lacks the capability to use a flick/pan gesture to scroll the ListBox items up and down. You have to use the scrollbar

I thought it was time to revisit the Touch project on codeplex as I remembered that it had a touch-based scrolling behaviour somewhere in it.

It does – it’s called TouchScrollBehavior and I went through the process of downloading the Surface SDK sample for Silverlight which it depends upon and then rebuilding the Touch project code for Silverlight 4.

However, I soon realised that the behavior worked fine for ListBox but not for anything else. There’s some code in there that deals specifically with ListBox and I had a look at trying to change it but got a bit bogged down ( there’s some odd stuff in that code which does things like loading lumps of XAML from strings which I find a bit peculiar ).

So, I built my own behavior from scratch which is intended to be applied to any ScrollViewer – it’s not perfect by any means but it works up to a point.

Here’s the code for that – note that it relies on the Surface SDK sample for Silverlight;

With that in place I can then make use of it by dragging it to my ListBox in Blend – that is; 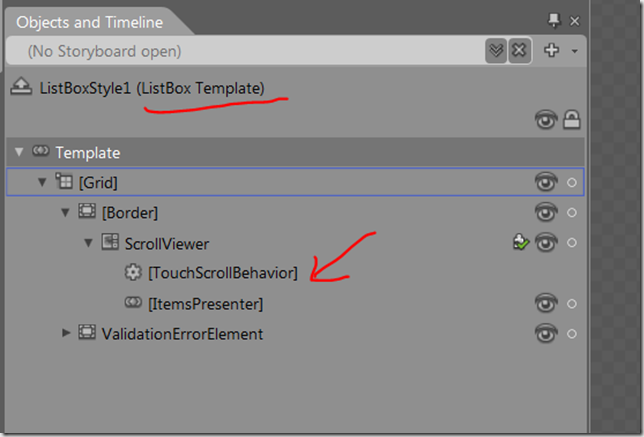 and everything seemed to be working pretty well in my ListBox; 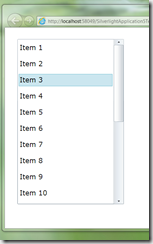 The TreeView followed a similar path. In short;

and that all worked pretty well too from a touch perspective;

The other controls – Button, CheckBox, Slider, Calendar, ComboBox all pretty much worked out just like they do for WPF. Here’s the notes that I made whilst experimenting with them; 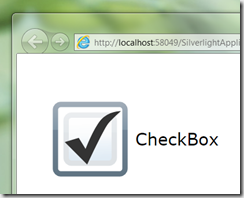 This is really only here for completeness. On Windows Phone 7 there is no assumption that you will have any input means other than touch and so,of course, the built in set of controls work well with touch input and there’s even that extra set of controls that really excel under touch input like the Panaroma control and the Pivot control.

I’m not really planning to write any more of these “touch-centric” posts for the moment. I looked at;

As an aside, a few people have asked me what hardware I’m using for this work and it’s a Dell SX2210T which I’m finding to be pretty good although there does seem to be a glitch when you run it in dual-monitor mode and the touch events seem to fire on the wrong monitor

Running it in single monitor mode or a reboot seem to fix the problem.