Resources are easy enough to understand.

Lots of elements used in XAML markup have a little dictionary of resources associated with them that can store an object of any type as long as it has a key associated with it (except in one case which I’ll come back to in a different post about Styles).

An element at a particular point in a UI hierarchy defined in XAML can then reference resources using the {StaticResource} markup extension and get the resource resolved. That resolution involves scanning “up” the UI hierarchy looking for an appropriately named resource and that search also includes “application level resources” defined in an app.xaml file.

Dictionaries of resources can be put into separate files and then merged together to form one bunch of resources.

Blend supports all of that. If I create a blank, new Silverlight project then I get by default an App.xaml file and a MainPage.xaml file and over on the Resources Panel/Window I see that I’ve no resources right now; 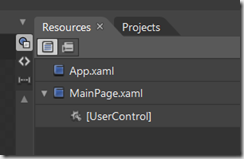 I’m not 100% sure of the algorithm that this Resources panel uses to decide what to show – it seems to “do the right thing” which, as far as I can tell, means that it will show;

Why not make a resource? If I go and draw out a Rectangle on the design surface and set its foreground to some solid colour brush like this lovely blue;

then I might well want to re-use that as a brush elsewhere so I can go and click on the “advanced options” box to the right of the Fill value – that is, the little white box to the right in order to raise a menu which lets me “Convert to New Resource”… 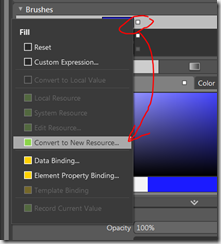 and Blend will then raise a dialog for me; 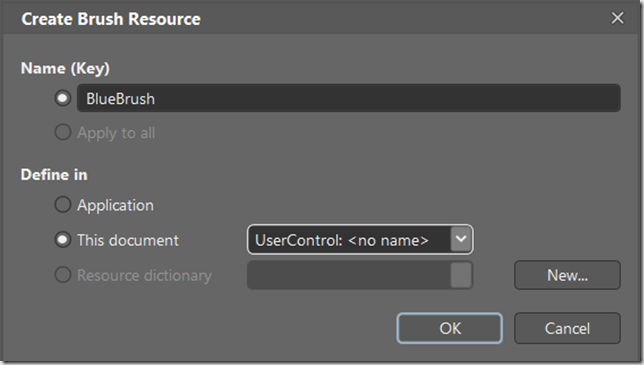 If I select App.xaml for the moment then I see my Resources panel update;

which shows me that I have the BlueBrush defined in App.xaml and it also lets me edit that brush resource inline in the resources panel; 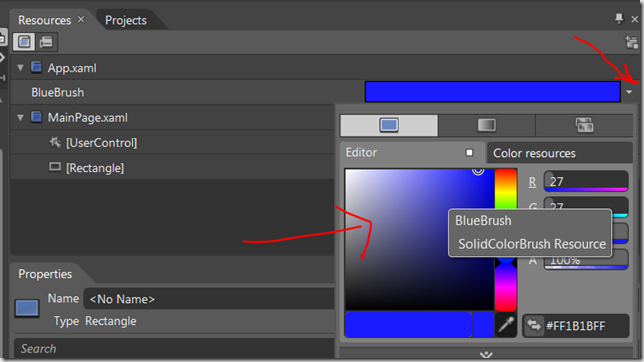 and it also offers me a 2nd view which shows me which elements are using which resources if I click the little button circled below to switch “tabs”;

and it also ( is there no end??!?! ) updates the “advanced options” button next to my Fill value in the Properties panel to a green colour which indicates “this is not a local value, it comes from a resource”; 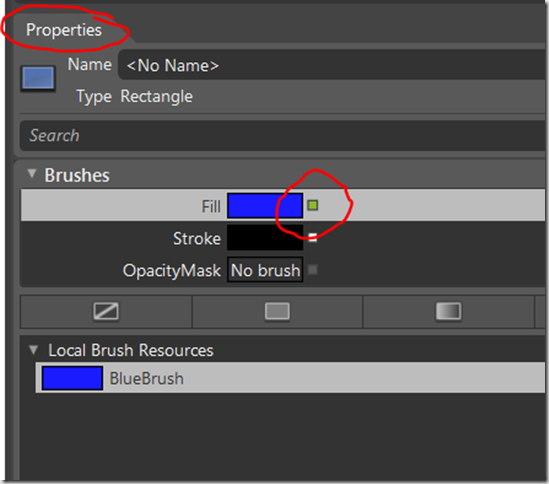 Just to illustrate that I can pretty much make a resource out of anything, I can take the Rectangle’s Width property and do the same thing to make it into a resource as well; 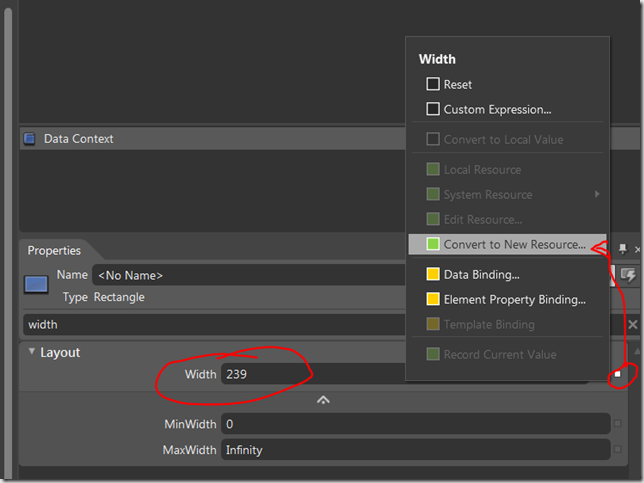 and if I follow the same procedure to put this as a resource into App.xaml then I now see 2 resources in there;

and, once again I can edit that definition in-line by just typing a different value.

If I wanted to “refactor” my resources so they were perhaps not in App.xaml but were, instead, defined as belonging to the UserControl in my MainPage.xaml then I can do that just by drag/drop;

Let’s say I’ve got something slightly more complex going on. Let’s say I have these Grids and this Ellipse; 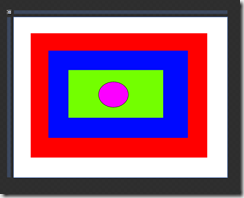 and I use the same method to take the pink colour of the Ellipse and turn it into a resource. If I go with the “current document” then the dialog offers me; 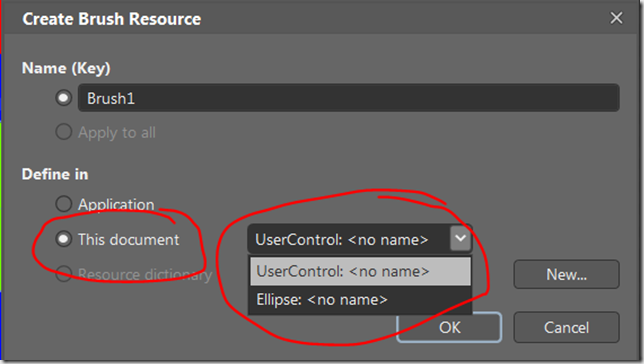 but if I had some resources already present in (say) the red grid and the green grid then it would offer me; 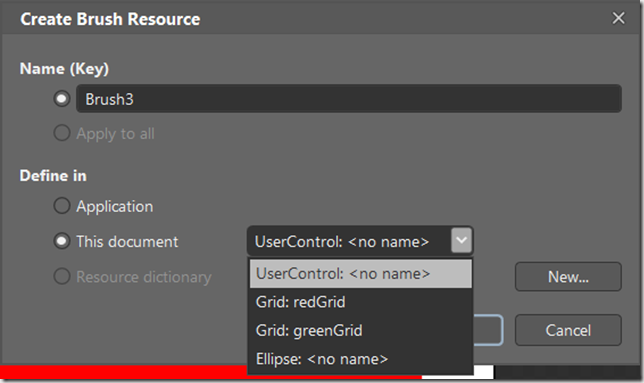 which is the same set of places the Resources panel is showing ( when I’ve no selection made on the artboard );

If I wanted to use a resource dictionary instead of going with one of these locations then I could ( for instance ) take a TextBlock like this one;

and raise the dialog on one of its properties ( let’s say FontSize – NB: this isn’t a great example because I’d usually use a Style for this ); 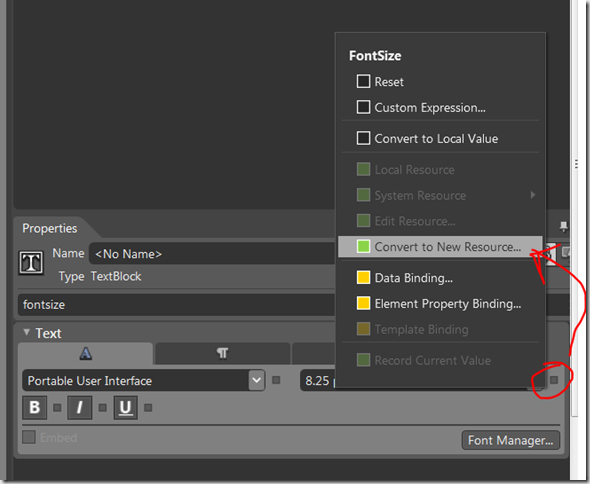 and I can extract that out to a resource dictionary; 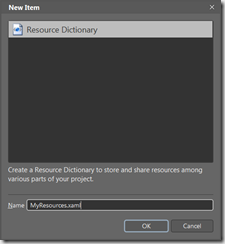 and then the Resources panel updates to show me the new dictionary and that it has been merged into the “global” dictionary owned by my App.xaml;

If I had a separate ( Silverlight library ) project in my solution with a reference between the two projects and was working in there as below; 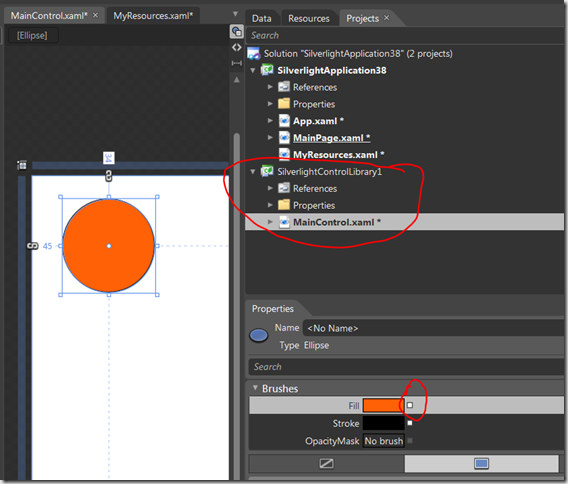 then the “make new resource” window will still allow me to put that resource into App.xaml or into the resource dictionary MyResources.xaml both of which actually live in the main project; 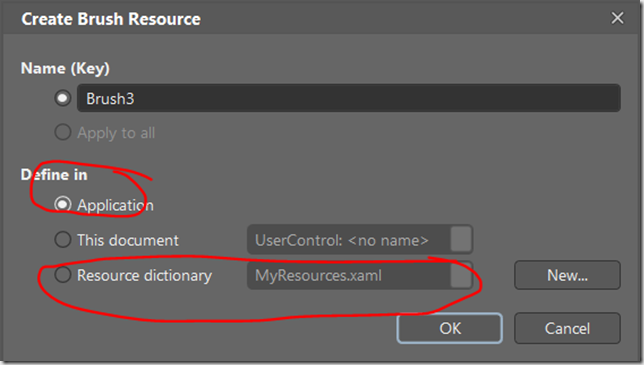 That "feels” a little odd but I can see circumstances where you’d want to do it. Alternatively, of course, I can put it into the local document or into a new resource dictionary in the library project and then have that dictionary merged into the one in app.xaml.

Once I’ve got a resource, using it is pretty easy. Here, I’ve got a red grid that defines a String resource called “resourceText” and then there’s a green grid that contains a TextBlock; 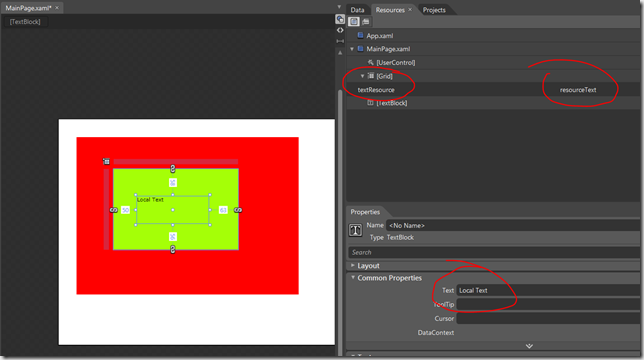 I can drag the resource to the TextBlock if I want to and Blend will ask me what I was hoping to achieve based on the type of the resource in question; 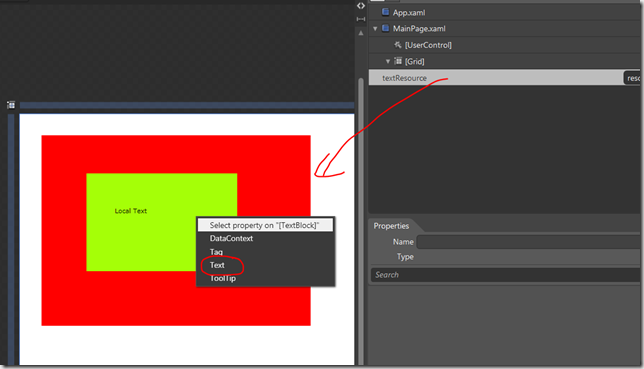 or I can visit the property over in the properties window and use the Advanced Options button; 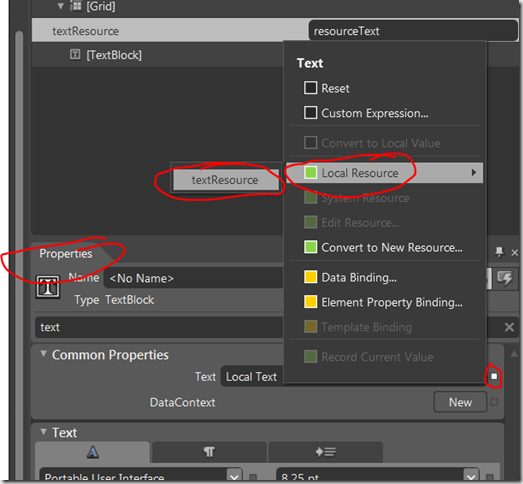 and if I had multiple resources available (e.g. at the app.xaml level and at the userControl level ) then it’ll show me all that apply; 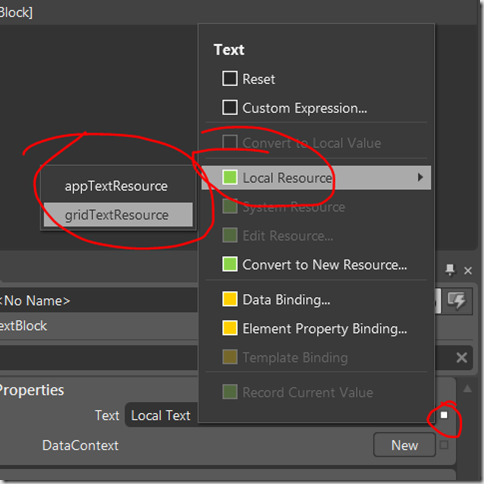 and if I have more than one project in the solution like this set up; 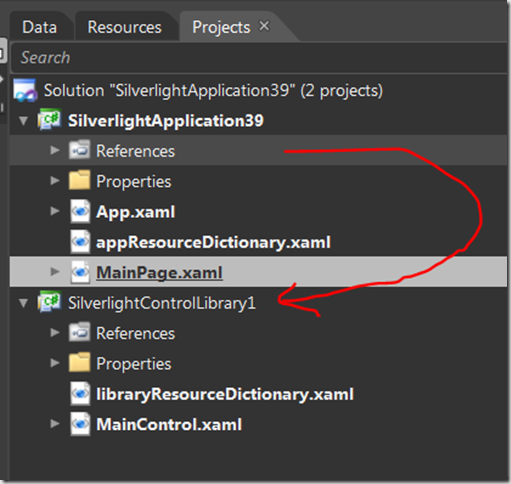 where I’ve got an app referencing a library and both the app and the library have resource dictionaries present and I’ve defined 4 brushes;

then when I’m looking for a brush resource to fill an ellipse on my MainControl.xaml which is in the library project I see;

that is – I see the brush that is locally defined in the same XAML file ( green ) but I also see those that surface themselves at the application level either directly or through merged dictionaries ( one of which is coming from the library itself ).

The resources pane is showing this; 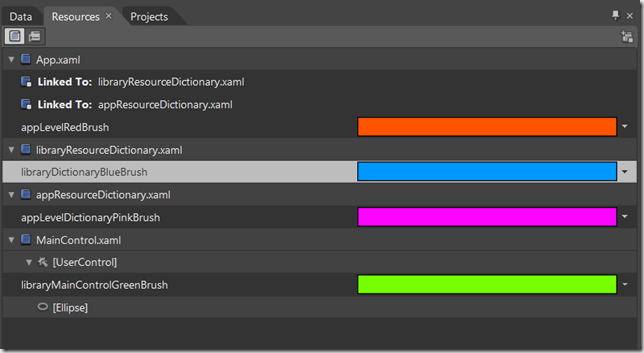 Whereas if I was working in the main project on MainPage.xaml then I would see possible brushes for my Ellipse of;

as, clearly, the green brush isn’t visible at all outside of the file and project that it was defined in.