Earlier in the year I dropped in to see some former colleagues of mine who are working on a new product/service called KoodibooK at their software company in Bath (UK).

KoodibooK is a product that allows you to build up a set of photographs into a book, publish that book to an online store and then buy copies of the book that you made or, equally, books that other people have made and published.

I really like the application – you can try it yourself in beta from http://www.koodibook.com – it looks great and “feels” really slick, snappy and just “friendly” to use. 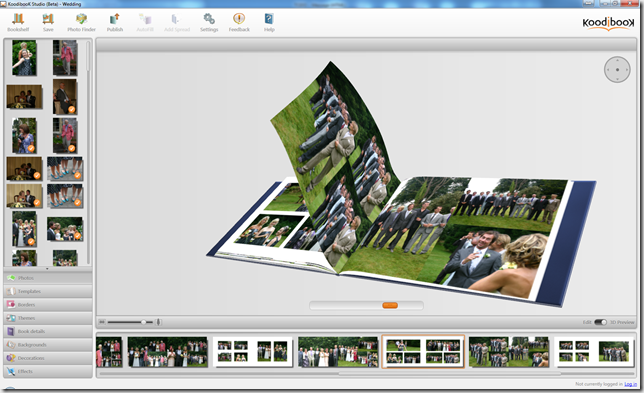 I’ve put together photograph books like this before myself using iPhoto on my Mac and I hadn’t come across a Windows solution quite as rich as this one – I plan to try it for my next photo book and see how it works out.

On the tech side – what I really found interesting was that the client applications and the websites/services that the guys have brought together cover such a wide range of the Microsoft stack.

The book creation part of the application needs to be rich and so there’s a Windows application written in WPF that leads the user from the creation of their book through to publishing it to the website.

On the website there’s still a need to show the book off in its best light and so Silverlight steps in ( with some re-use from the desktop code base ) in order to ensure that a very wide range of users can still see the books that are available with high fidelity even though they may not have the book creation application installed.

And those Silverlight “islands of richness” are hosted within web pages written with ASP.NET MVC2 and hosted in Windows Azure – KoodibooK is “living the dream” when it comes to bringing together all those platform pieces 🙂

I managed to get Richard Godfrey and Paul Cross of KoodibooK captured on video talking about the application ( which they demo ), the company and how they needed to harness the power of the client PC over for the sort of application that they wanted to build – it’s a bit of a “warts” and all discussion in that the guys talk about some of the pain points of getting .NET Framework V3.5 Sp1 deployed but that’s the reality of building software ( plus, it’s a lot easier now we have Windows 7 with 3.5 Sp1 already built in 🙂 ).