I was pretty excited to see that there’s a new drop of MEF up on CodePlex – if you’re a reader here then you’ll know that MEF will ship with Silverlight 4 and with .NET Framework 4.0 ( it’s already in the beta/RC bits in both cases ) and there are versions on CodePlex targeting Silverlight 3 and .NET Framework V3.5 Sp1.

The phrase that I like to use to describe MEF is that it is a;

that’s not an official “MEF team” definition – it’s just Mike’s view and there’s many places where MEF makes sense such as in building pluggable application architectures and also in implementing patterns like MVVM.

If you’re looking to get started with MEF then here’s some quick resources;

but if you’re already up and running then what’s new in the CodePlex drop for the Silverlight developer? Three small changes and a larger addition;

Let’s run through those in order;

Firstly, it’s worth saying that there are updated samples to show this functionality so if you’re a “samples kind of person” then take a look at the updated HouseSpacePlanner sample and the new DeploymentCatalog ( more on that in a moment ) sample to get going.

MEF deals with imports and exports. We can have a piece of code like this one that exports some mythical functionality via an interface IPlugin;

and we then have a particular kind of IPlugin like PluginA in the code above which exports itself via MEF as an IPlugin. If we were building some kind of application shell class that made use of this pluggable functionality then we might write code such as;

and note that the ApplicationShell does two things. One is that it imports an IPlugin and the other is that to “tell MEF” that it wants that import ( and any recursive imports ) satisfied it calls CompositionInitializer.SatisfyImports in its own constructor on “itself”. This class has been renamed from PartInitializer and I think that the new name is much more indicative of what the method call is actually doing;

[NOTE] CompositionInitializer.SatisfyImports does a whole bunch of work around making sure that a “default” container is set up for the application and populated with AssemblyCatalogs for the assemblies found in the application’s deployment.

The previous code-snippet is fine but it means that one and only one instance of IPlugin is available to my ApplicationShell. Sometimes I might want MEF to not import an actual instance of an import but, instead, the means to create an instance. You can imagine some shell like Outlook that imports an email view and you might well want to have more than one instance of that email view showing different folders and so on and so the importing application needs to be able to create those views dynamically.

This is what ExportFactory is for. It was previously named PartCreator and if we changed our code to look something like;

then you can see that I’ve now done my import via ExportFactory<IPlugin> and so what MEF composes for me is a factory that knows how to make IPlugin instances whenever I like ( as used in the MakeNewPlugin() method above ).

The driving force behind that change is to ( for Silverlight 4 ) make System.ComponentModel.Composition.dll an assembly that you can reference from code libraries that can be shared to target both the .NET Framework on the desktop and the Silverlight .NET Framework. Very cool! For more on shared assemblies, see here.

Renaming of CompositionHost.InitializeContainer() to Initialize() and Changes

In the previous code snippets, I never went anywhere near CompositionHost because there would be no need to if I was happy with the default behaviour that CompositionInitializer.SatisfyImports for me drives ( see the previous text marked [NOTE] ).

So, as long as I run code like this code below before any calls to CompositionInitializer.SatisfyImports() then I can get to alter the default container that will be used. As a simple example, I can use something like a TypeCatalog to introduce my types rather than rely on the default behaviour built around AssemblyCatalog ( note – there’s no real reason to do this, it’s just a cheap example here );

now, the very sharp-eyed amongst you might have noticed that Initialize() has a new overload here in that it now has an overload that takes any number of ComposablePartCatalog instances which means that you can avoid having to get involved with creating a CompositionContainer unless you have a specific need to and just simplifies things and reduces lines of code.

For me, this is a case of saving the best until last 🙂

The new drop has a class called DeploymentCatalog.

I demo’d a similar thing in my talk at the London Silverlight User Group and said that this may show up in Silverlight 4 by the time of release. There’s no promises around that but I hope that the class showing up here on CodePlex suggests that there’s still a good chance of it 🙂 In the current Silverlight 4 beta toolkit there are classes PackageCatalog and Package that perform a similar function but ( imho ) aren’t as good to work with.

MEF ( for Silverlight ) has a bunch of catalogs from which parts can be pulled – TypeCatalog, AssemblyCatalog, AggregateCatalog.

DeplomentCatalog is an additional ComposablePartCatalog which can be used to download a XAP from a URI and it will then “do the right thing” around exporting the composable parts found in that XAP.

I had an example in the talk that I gave in London which had components something like in the picture below – the idea being that I might be writing an application a little like iTunes/MediaPlayer and I want to have a pluggable component that knows how to get album information for a particular album. That component may well delegate part of its work like finding the actual album artwork to another pluggable component; 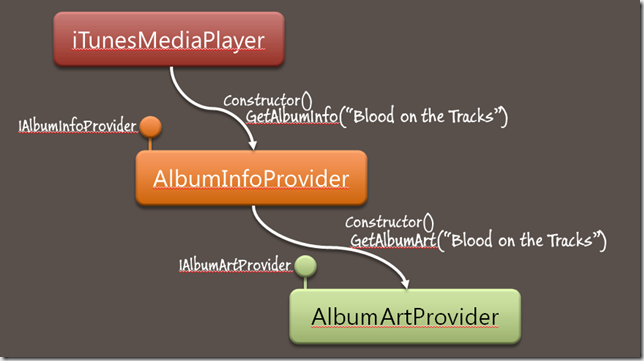 where my interfaces are really simple ones like this;

and then I have some very hard-coded implementations;

I packaged these 2 implementations into 2 separate XAP files and dropped them onto my site-of-origin so in Visual Studio it looks like;

and then my main application shell does an import for an IAlbumInfoProvider as in;

with that in place, I can use the DeploymentCatalog to download my additional XAPs asynchronously as the lifetime of the application progresses;

This is very, very neat. What actually happens as this application runs is something like;

until all the functionality that was imported is download asynchronously over the network and recomposed by MEF into working componentry.

Neat. I wrote this slide; 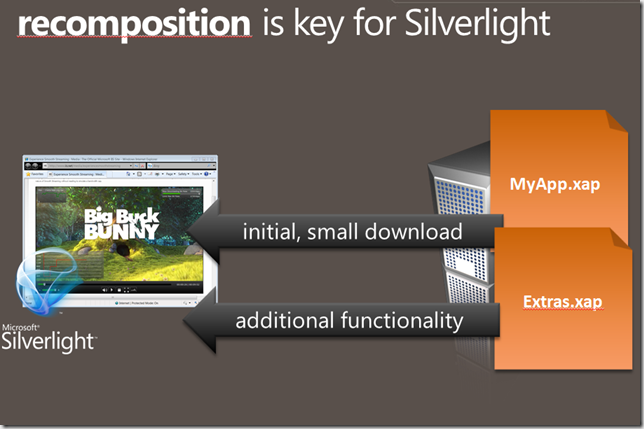 and I think DeploymentCatalog is a great step towards making this easier.