I’ve been to lots of conferences or meetings where people (Microsoft or not) are delivering technical sessions relating to Microsoft technology. I’ve also spoken at lots of those things as well.

A recurring problem is getting feedback. Sometimes it’s a long paper-based form to fill in. Sometimes it’s a website or a terminal where you tick boxes to provide your view on the sessions you’ve seen. Sometimes it seems that the organiser has gone to great lengths to make it so difficult for you to provide feedback that you don’t bother and the speaker is none the wiser as to whether they did a great job or not.

The obvious solution these days is to use something like Twitter and people do exactly that but I wondered whether it might be possible to come up with a simple, “standardised” way of providing session feedback via Twitter rather than leaving it to be ad-hoc.

How would that help?

I think it could be interesting 🙂 although I suspect someone’s already done it ( or perhaps it’s too restrictive to be adopted? )

Anyway, I came up with the scheme below as a suggestion and called it ( catchily! ) MSFT – Microsoft Session Feedback on Twitter. 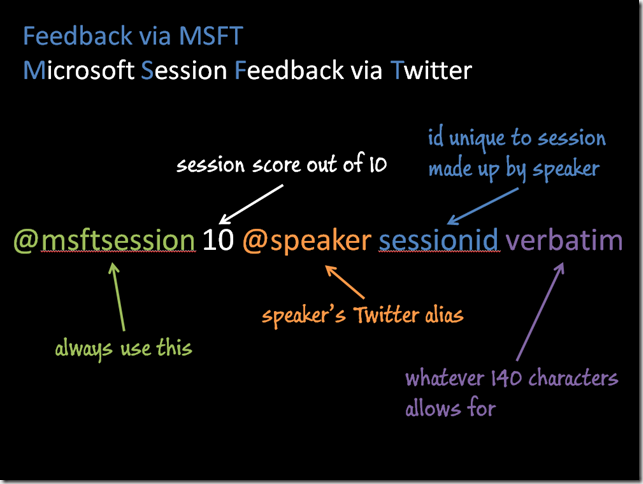 So, as an example I did a session recently for the new NEBytes North East User Group here in the UK and I could have given that a unique id like NEB1 ( only unique when combined with @mtaulty ) and someone could have fed back with;

@msftsession 3 @mtaulty NEB1 Wow that session was terrible. Start over!

What do you reckon? Is it a useful thing to try? Would people use it? I might try it out with a session I’m running this week and see how it goes ( of course, this opens me up to public abuse via Twitter but that would happen with/without a “formal” mechanism so pretending otherwise is just sticking your head in the sand 🙂 ).